Stronger cash prices, short-covering and caffeine following late-night celebrations as the Houston Astros swept the New York Yankees to advance to their fourth World Series in six years. Those were among the myriad reasons market observers gave for Monday’s recovery along the Nymex natural gas futures curve. 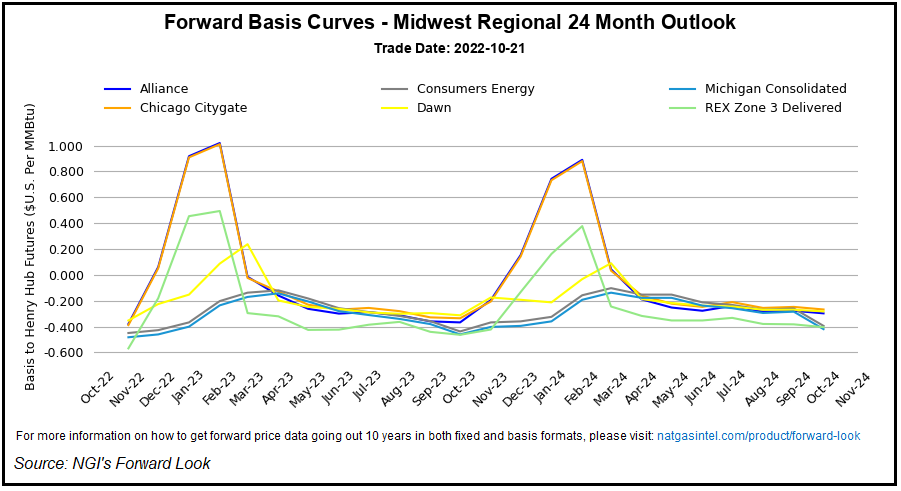 Based on trading out of the gate Monday, it appeared that futures were heading for a seventh consecutive decline. But technical indicators pointed to a market that was oversold and after plunging about $1.50 over the past week, futures were due for a correction.

Rubin noted that both the Cove Point and Freeport LNG export facilities remain offline with little activity seen over the weekend. Cove Point has been down since the beginning of October because of planned maintenance, while Freeport shut in early June following a fire. Only nominal amounts of feed gas are being delivered to the liquefied natural gas facilities, NGI data show.

Meanwhile, weather models continue to paint a generally bearish pattern over the next couple of months. The European model, much warmer than its American counterpart in recent days, added several heating degree days (HDD) on colder trends over the weekend. That also could have aided Monday’s futures rally, but both datasets remain “exceptionally bearish overall” and still are more than 50 HDDs warmer than normal through the first week of November, according to NatGasWeather.

“The start of November maintains a bearish setup as most of the U.S. will be 10-25 degrees warmer versus normal,” the forecaster said. “It will take much colder weather maps for bearish weather headwinds to end, and we continue to look to mid-November for the next best opportunity.”

Until physical demand begins to rise, downward pressure could extend further, EBW noted. Importantly, thanks to the unseasonable weather this autumn, the market has slashed the storage deficit versus the five-year average by a stunning 149 Bcf, according to the firm. This has been one of the primary drivers of prices over the past month. At the same time, the end-of-March storage target has climbed above 1.4 Tcf, providing a cushion for the market to sell off.

That said, while winter shortage risks are steeply lower, “the market may be making a mistake in extending recent looseness into forward projections,” Rubin said. “Increased seasonality of demand and returning LNG could materially tighten the market.”

The analyst noted that there is little ability to switch from gas to coal in the power sector, diminishing any upside pressure release valve if the second half of November becomes colder.

Still, the December contract, set to take over the prompt-month position later this week, is trading at a 51.3-cent premium to November. “As December assumes the front-month role, further downward pressure cannot be ruled out,” Rubin said.

Spot gas prices were mostly higher on Monday as markets recovered from the pre-weekend slump, but pipeline maintenance in the Permian Basin was pressuring prices in that region.

With demand off summer highs, and forecasts for cooler weather beginning Tuesday, next-day gas prices came off by more than $2.00 nearly across the board. El Paso-Permian cash dropped $2.170 to average only 67.0 cents for Tuesday’s gas day. Waha averaged only 58.0 cents after falling $2.020 from Friday’s levels. Both locations traded as low as a nickel.

Kinder Morgan Inc. was scheduled to perform inspections and repairs at the Rankin, Devils River and Big Wells compressor stations along the Gulf Coast Express Pipeline (GCX) this week. From Tuesday to Wednesday, GCX capacity is to be restricted to 1.325 Bcf/d and from Thursday to Friday, capacity is to fall further to 1,125 Bcf/d.

Double E pipeline also released a notice regarding this event, asking shippers to stay aware of any changes to contract demand during this maintenance. In the past, similar restrictions on GCX have had little-to-no impact on Double E deliveries. However, the net operational capacity during this event could be the lowest capacity compared to past events similar to this one.

Elsewhere across the country, Williston Basin Pipeline (WBI) is set to begin planned maintenance this week at the Charbonneau compressor station on Line Section 6, located in McKenzie County, ND. Deliveries to Northern Border Pipeline (NBPL) are unavailable through Friday, and maximum capacity at the station is reduced to 45 MMcf/d.

Wood Mackenzie said receipts from NBPL onto WBI are not impacted by this limit based on an October maximum total scheduled quantity of around 37 MMcf/d for Oct. 21. WBI deliveries to NBPL at the Charbonneau interconnect averaged roughly 80 MMcf/d between Oct. 1 and Oct. 22 and reached a maximum of about 94 MMcf/d on Oct. 11 during that period.

On the pricing front, Midwest and Midcontinent locations saw next-day gas prices rise anywhere from a quarter to as much 63.5 cents. Chicago Citygate spot gas averaged $4.370 for Tuesday’s gas day, and Ventura jumped 52.5 cents to $4.345. OGT spot gas picked up 40.5 cents to hit $3.530.