Regional heating demand is expected to heighten along with colder temperatures in the Mountain West and snow over the Northern Plains this week, helping to counter warmth elsewhere across the Lower 48 and fueling a long-awaited rally on Tuesday in natural gas futures. Over the prior six trading sessions, the prompt month shed nearly 50 cents. 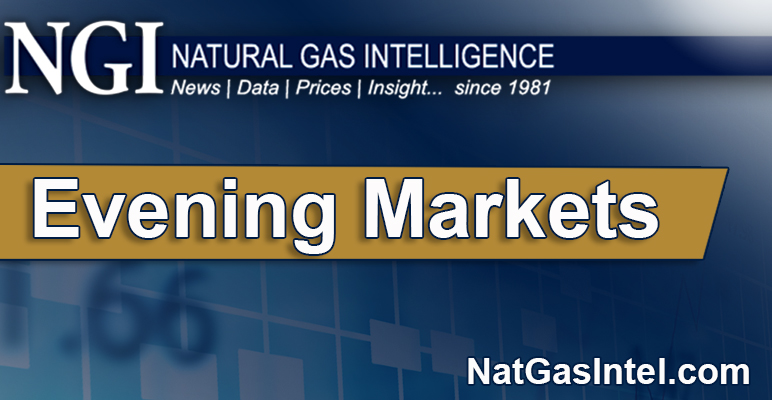 “Weather systems with rain and snow will sweep across the West and Northern Plains with chilly highs of 20s to 50s for locally stronger demand,” NatGasWeather said. The system took hold Tuesday and was expected to linger for much of the week “for minor bumps in national demand.”

Between Monday and Tuesday, weather models added a few heating degree days (HDD) because of the trending systems, the forecaster said. That noted, domestic heating demand could soon fade.

The weather outlook “remains solidly bearish” in other parts of the country and overall for November. “Warmer-than-normal conditions continue across the southern and eastern” United States, “with highs of 60s to low 70s for the Great Lakes and Northeast and perfect 70s and 80s across” the South.

Starting early next week and extending through Nov. 24, “warm high pressure dominates much of the U.S.,” NatGasWeather added.

Lower 48 production levels that were down moderately from last week along with strong liquefied natural gas (LNG) levels, meanwhile, added to the optimism. LNG feed gas levels hovered above 10 Bcf – around record levels – as they have for several days, indicating steady export demand from key destinations in Asia and Europe.

While the coronavirus looms large as a potential threat to export demands, news this week of a potential vaccine getting approved this year soothed concerns about strict and lasting lockdowns across Europe and potentially parts of Asia that could stunt economies and energy demand.

Pfizer Inc. said Monday its vaccine had proven 90% effective in short-term testing, and it said it could ask health regulators for permission to sell the vaccine within weeks. However, safety tests still needed to be cleared.

Still, the pandemic would remain a near-term threat. Getting the vaccine to enough people to slow the spread of the virus at a time when it is surging presents a major logistical challenge for governments.

While Pfizer’s announcement was pivotal for “both science and humanity,” Raymond James & Associates Inc. analysts said it did not undo “the current reality of spiking Covid cases and hospitalizations across the U.S. and Europe.”

The United States averaged 108,737 new Covid-19 cases a day over the past week, more than any week prior, according to Johns Hopkins University. Cases are increasing in 43 states.  Across Europe, meanwhile, countries are reporting rising infection rates. Several, including France and Germany, recently announced new business restrictions.

Though President Trump has not conceded the election, Joseph R. Biden Jr. took his first major action as president-elect by forming a coronavirus task force to form a plan to eventually distribute vaccine doses and, in the meantime, firm up strategies to slow the pandemic’s pace.

“The challenge before us right now is still immense and growing, and so is the need for bold action to fight this pandemic,” Biden said during televised remarks. “We are still facing a dark winter,” but “we could save tens of thousands of lives if everyone would just wear a mask for the next few months.”

Energy Aspects recently projected a 25% decline in HDDs for the first half of November versus the 10-year normal, or a 40% decline year/year.

“Earnings calls from major industrial players in 3Q2020 back our assumption for baseload industrial demand to only reach its pre-pandemic baseline in 3Q2021,” Energy Aspects said.

Spot gas prices advanced across the Lower 48 Tuesday, extending to two days a rally fueled by the arrival of colder temperatures in the nation’s midsection.

In the Midwest, several hubs made solid advances for the second consecutive day. Chicago Citygate climbed 21.0 cents day/day to an average $2.535, while Defiance advanced 23.5 cents to $2.490.

Elsewhere, prices in the Northeast and Appalachia soared after starting to recover Monday from last week’s slump. The beating prices took a week earlier in these regions was driven by unseasonably warm weather that sapped demand. However, Genscape Inc. said regional maintenance work that had caused transmission constraints was lifted, adding to supply, while waning storage capacity also fostered downward pressure on prices.

Additionally, Tropical Storm Eta was expected to stall in the Gulf of Mexico (GOM) this week, with forecasters uncertain whether it would fade or gather momentum and move inland by the weekend. While overall impacts were expected to be modest, production declines in the GOM were still viewed as possible, NatGasWeather said.

On the pipeline front, Texas Eastern Transmission (Tetco) on Monday released a notice stating that as part of its ongoing Pipeline Integrity Program, further investigations are required on its line between its Somerset and Summerfield compressor stations (CS) in Ohio. As a result, Tetco declared a force majeure.

Genscape said capacity through the Lebanon CS had been reduced from a normal operating capacity of 551 MMcf/d to 125 MMcf/d effective Tuesday. This is 420 MMcf/d below the previous two-week average of 545 MMcf/d, the firm said. There is currently no estimated date for a return to service.

Also this week, Sabine Pipeline reported maintenance that would take some Henry Hub connected points out of service. Beginning Tuesday and continuing through Nov. 18, Genscape said, deliveries would be unavailable at the Columbia Gulf interconnect. From Tuesday through Thursday, receipts from and deliveries to Bridgeline would be unavailable, resulting in up to 220 MMcf/d of lost deliveries on the Sabine system.