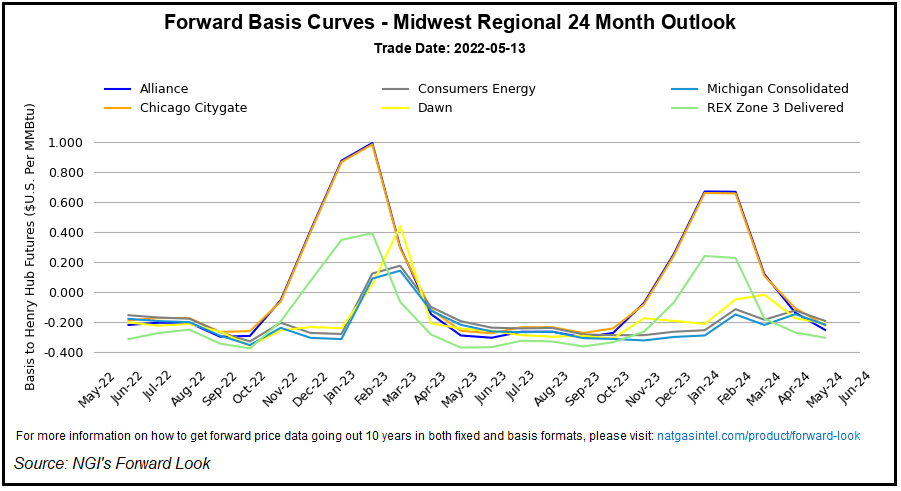 The prompt month had closed lower Friday and shed 5% the past week.

Production dipped slightly below 95 Bcf to start Monday after climbing above that threshold briefly last week, according to Bloomberg’s estimate. Output remained well below the 97 Bcf peak of the past winter, amplifying already simmering concerns about adequate storage supplies.

The U.S. Energy Information Administration (EIA) most recently reported an injection of 76 Bcf natural gas into storage for the week ended May 6. The print fell shy of the five-year average increase of 82 Bcf and left inventories at a deficit to recent norms.

At the same time, European demand for U.S. liquefied natural gas (LNG) has held at solid levels amid Russia’s ongoing war in Ukraine. Countries across Europe are calling for LNG to gradually replace supplies of Russian natural gas.

Rystad Energy also noted the threat of Russia preemptively cutting off pipeline exports of gas to parts of Europe in retaliation of Western sanctions and recent steps by Finland and Sweden to join the North Atlantic Treaty Organization, aka NATO.

Russian President Vladimir Putin, in a first move, cut electricity supply to Finland over the weekend. He did not follow up with restrictions on gas flows, but “the likelihood remains in the near future,” said Rystad analyst Wei Xiong.

Domestic demand is holding at elevated levels by May standards.

Temperatures have eclipsed 100 in parts of Texas and the Southwest in May, and exceptional highs in the mid-90s were reported last week in the northern Plains.

“Given the strength in power burns we are seeing, we still feel the risk to prices is skewed to the upside, and our lean is that we probably have not seen the highs in prices for the year, especially if our hotter forecast ideas pan out as we move into the meat of the summer season,” the firm said.

Bespoke joined a chorus of other forecasters – from AccuWeather to the Farmer’s Almanac – in predicting above average heat for the Lower 48 this summer. This, the firm said, is likely to keep air conditioners cranking through the months ahead.

Near term, the 15-day forecast period shed projected demand by trending cooler over the weekend, according to Bespoke. Still, early season heat is expected to permeate much of the South through May and into early June.

As a whole, gas-weighted degree days still leaned above-normal for the 15-day period, and this is “likely the base state we will have for the summer,” Bespoke said. The “persistence of La Niña” suggests temperatures will be “skewed hotter than normal.”

One looming wildcard is the specter of an economic downturn that could curb commercial and industrial demand.

Goldman Sachs Group Senior Chairman Lloyd Blankfein said Sunday on CBS television there is “very, very high risk” of recession. He cited soaring inflation – consumer prices hit a 40-year high in March – and the Federal Reserve’s response. Fed policymakers have twice raised interest rates this year to ease spending and cool inflation. Historically, however, when the Fed has raised rates aggressively, activity has grinded to a halt and the economy has tipped into recession.

“If I were running a big company, I would be very prepared for it,” Blankfein said on CBS’s “Face the Nation. “If I was a consumer, I’d be prepared for it.”

Spot gas prices cruised higher across nearly every region of the country as heat percolated and cooling demand held strong.

NatGasWeather said the southern United States was expected to remain very warm to hot this week with highs in the upper 80s to 90s. The Southwest and West Texas could see peak temperatures above 100.

The northern half of the country is projected to see “mostly comfortable” highs in the 60s to lower 80s “as weather systems track through with showers,” the firm said. Still, temperatures to start the week were near the higher end of the forecast range over parts of the Midwest and East.

Similar conditions were expected to extend into next week, with the level of overall demand dependent on the ultimate severity of heat in southern markets such as Houston and Phoenix.

On Monday, cooling systems were running steadily enough to prop up prices from California to New England.

Halfway through May, he said, average border flows from the region are nearing 1.7 Bcf/d, the “strongest ever” and “11% above that of April, which was already robust at 1.5 Bcf/d after soaring 25% from March,” the analyst said Monday.

“The bulk of that demand comes from gas burns for power generation, which tends to peak during Mexico’s summer season,” he added.