After steep drops the three prior sessions, natural gas futures bounced back Thursday, as traders digested a bullish inventory report – relative to historic norms – that reminded how strong demand proved over the bulk of summer. 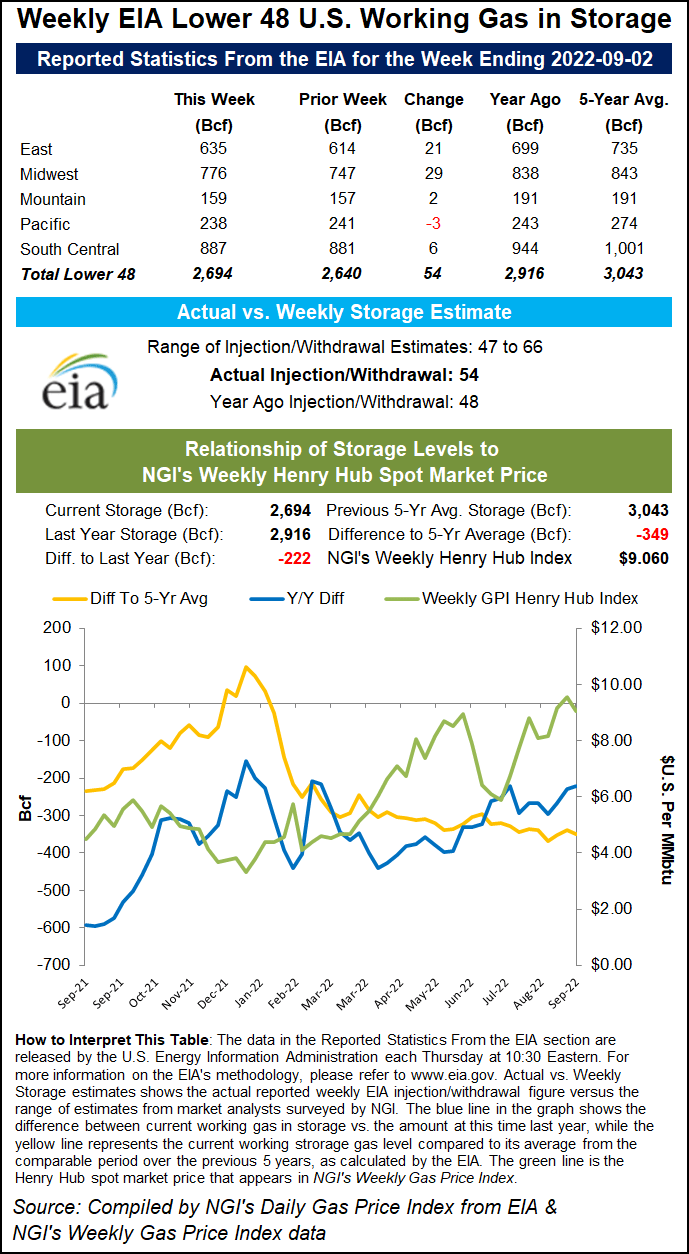 The U.S. Energy Information Administration (EIA) on Thursday reported an injection of 54 Bcf natural gas into storage for the week ended Sept. 2. The print came in roughly on par with expectations found by major polls, but it fell shy of the five-year average build of 65 Bcf.

Analysts said it reflected the intense late-summer heat across large swaths of the country – continuing a summer-long trend of strong, steady demand for gas to cool homes and power businesses.

Working gas in storage rose to 2,694 Bcf as of Sept. 2, according to EIA. However, stocks were 222 Bcf lower than a year earlier and 349 Bcf below the five-year average.

Production climbed in late August and early this month, reaching a 2022 high this week, yet output has yet to fully align with demand.  “There is no doubt production is rising, but this demand is pretty impressive,” said one participant on online energy platform Enelyst.

By region, the Midwest and East last week led with injections of 29 Bcf and 21 Bcf, respectively, according to EIA. The South Central increase of 6 Bcf followed and included a 9 Bcf injection into nonsalt facilities. Utilities withdrew 3 Bcf from salts. Mountain region stocks increased by 2 Bcf, while Pacific inventories fell by 3 Bcf.

Early estimates submitted to Reuters for the week ending Sept. 9 showed an expected mean increase of 64 Bcf. That would again fall short of averages for this time of year. The actual build in the comparable week of 2021 was 78 Bcf and the five-year average was 82 Bcf.

So far this month, some of the most intense heat – and greatest gas demand – has been in the West. Triple-digit temperatures have scorched stretches of California and the Southwest.

“The heatwave that had started in California last week is still ongoing, and several decades-old temperature records were hit throughout the state” to date in September, Rystad Energy analyst Ryan Kronk said.

The California Independent System Operator, the state’s grid operator, warned that capacity did not meet forecast demand Thursday; the same was true the four prior days.

“This will bring increased power prices and higher chances of blackouts,” Kronk said. Power prices this week are “by far the highest California has experienced in the summer in the last decade.”

Production Up, LNG In Question

Still, natural gas price gains were held to modest levels Thursday in part because of an expected mid-month cooldown and rising production.

Output topped 100 Bcf/d this week – a peak for the year – and government officials expect it to hold at high levels. EIA estimated U.S. dry natural gas production will average 99.0 Bcf/d during the fourth quarter and then rise to a 100.4 Bcf/d average for 2023.

National Weather Service (NWS) forecasts, meanwhile, call for moderating temperatures in the West and much of the Lower 48 beginning this weekend and continuing through the week ahead. Long-range outlooks point to seasonally benign weather next month.

Cheniere said it did not expect any major near-term complications. However, “the fear in the market is Cheniere will have to curtail exports until the turbines comply with the new regs,” analysts at the Schork Report said Thursday.

Physical gas prices on Thursday gave up ground for the third time this week.

NWS data showed ongoing lofty temperatures in the West through the trading week, along with highs in the 90s in Texas and across the Plains and parts of the Midwest.

However, temperatures were projected to moderate over the weekend in California as Hurricane Kay’s outer bands, near Mexico’s Baja California Peninsula Thursday, extend to the United States, delivering heavy rains and cooler air.

According to cooling-degree forecasts for California, “upcoming heat will keep projected levels far above normal” through this week, but temperatures “are expected to drop substantially afterwards,” Wood Mackenzie analyst Quinn Schulz said.

Separate rain showers were expected to ease the intensity of heat in the central United States by early next week.

By mid-month, NWS data showed, much of the western and northern portions of the country could see comfortable highs of 60s to 80s. Parts of the South, however, could continue to endure highs in the 90s.