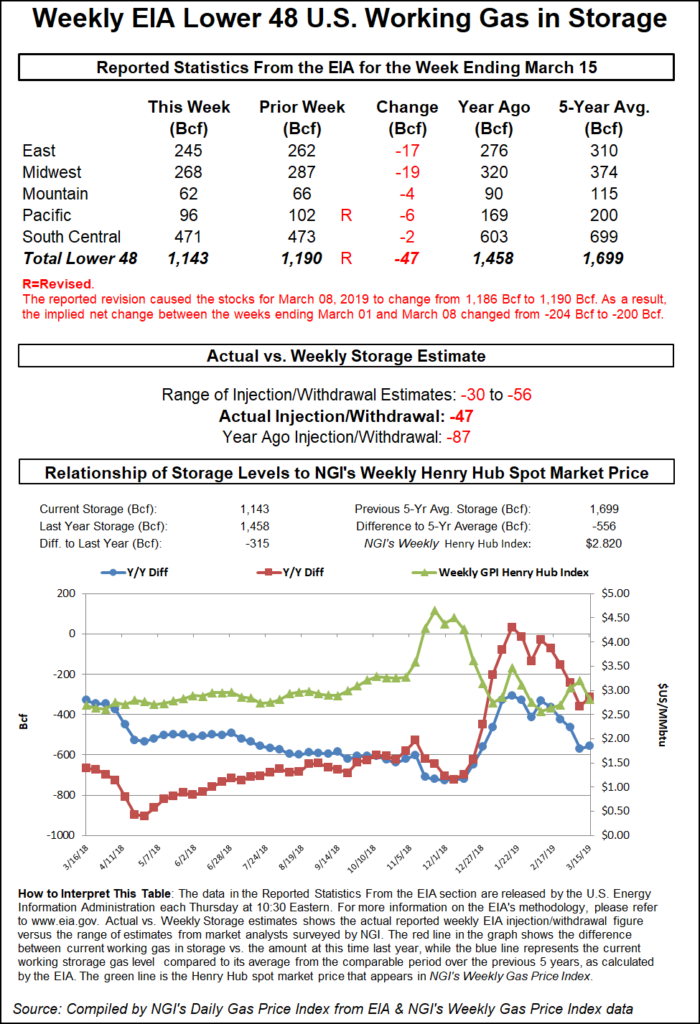 Thursday’s EIA report, covering the period ended March 15, also included a small bearish revision to the prior week’s data. Due to a 4 Bcf revision to South Central region nonsalt stocks, the net withdrawal for the week ended March 8 was actually 200 Bcf, not 204 Bcf as originally reported, EIA said.

As for the week ended March 15, the 47 Bcf withdrawal largely validated the market consensus leading up to the report, as major surveys and Intercontinental Exchange futures had landed on a pull in the 48-50 Bcf range. NGI’s model predicted a 44 Bcf withdrawal.

Last year, EIA recorded an 87 Bcf withdrawal, and the five-year average is a withdrawal of 56 Bcf.

During a discussion on energy-focused social media platform Enelyst, Genscape Inc. analyst Eric Fell described the 47 Bcf figure as “much looser” than the five-year average when factoring in weather-driven demand during the report period.

According to Fell’s calculations, “There were 14 more degree days than the five-year average, but the draw was lower than the five-year by 7 Bcf…Year-to-date stats have been loose versus weather by a little less than 2 Bcf/d. This is despite freeze-offs that have averaged close to 1 Bcf/d and hydro coming in near five-year minimums.”

While analysts see looseness in the market on a weather-adjusted basis, inventories remain at a deficit to historical norms. Total Lower 48 working gas in underground storage stood at 1,143 Bcf as of March 15, 315 Bcf (21.6%) below year-ago levels and 556 Bcf (32.7%) below the five-year average, according to EIA.

By region, the Midwest saw the largest pull week/week at 19 Bcf, while the East withdrew 17 Bcf. In the Mountain region, 4 Bcf was withdrawn, while 6 Bcf was pulled from Pacific stockpiles. In the South Central, EIA reported a net 2 Bcf withdrawal for the period, with a 6 Bcf injection into salt stocks offset by an 8 Bcf pull from nonsalt.