Natural gas futures continued to flip flop midweek as a technical bounce lifted prices modestly despite cooler weather in the forecast. A recovery in exports to Mexico also likely had a hand in the uptick, which boosted the September Nymex futures contract 1.5 cents to $3.852/MMBtu. 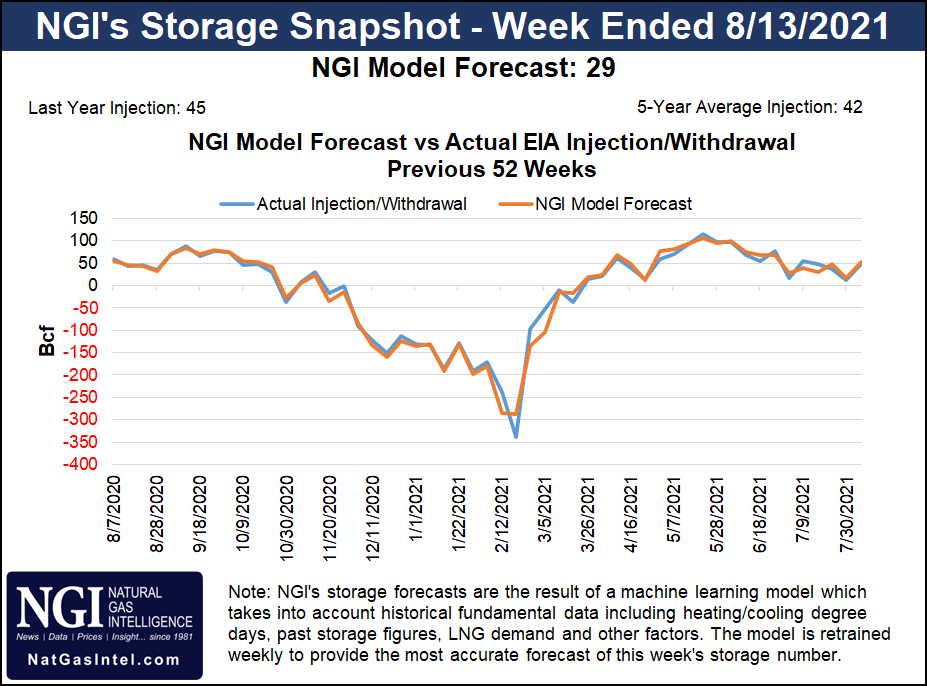 With the clock ticking on summer, recent weather models have provided little for natural gas traders to get excited about. There is a strong likelihood that temperatures will warm back above normal levels this weekend through next week across the eastern two-thirds of the country. However, highs would likely fall short of the record heat experienced last week and any bump in demand could be shortlived.

NatGasWeather said long-range models have become increasingly bearish for the late August/early September period as the upper ridge weakens. Rather than keep the hot pattern intact, this weakening instead would bring “perfect” daytime temperatures in the 70s and 80s across the northern United States. Even the normally sweltering South would likely see less coverage of 90s and 100s, the forecaster said.

Meanwhile, tropical activity has ramped up over the past week, with the remnants of Tropical Storm (TS) Fred moving across the Ohio Valley and Mid-Atlantic. Two other weather systems — Hurricane Grace and TS Henri — are not expected to have much of an impact on production, but could provide enough cloud cover and rains to drench demand on the Gulf and East coasts in the coming days.

On Wednesday afternoon, Grace was a Category 1 hurricane projected to make landfall early Thursday in the eastern Yucatan Peninsula, according to the National Hurricane Center (NHC). The storm would then likely restrengthen as it moves over the southwest Gulf of Mexico on Friday.

Henri was about 190 miles southwest of Bermuda, with a northward turn expected on Friday. The storm was seen by the NHC reaching hurricane status sometime over the weekend.

Despite Wednesday’s small increase at the front of the Nymex curve, NatGasWeather said the increased selling that’s taken place in recent days is likely because extreme summer heat across the United States is running out of time. “We also view recent selling as healthy, as natural gas bulls take profits and allow prices to reset before seeing how production and supplies respond the next few months ahead of what’s expected to be a much tighter winter season compared to previous years.”

Indeed, the upcoming spate of mild weather may help alleviate some concern about tight supplies this winter. Mostly strong power burns this summer, along with strong export demand, have combined to limit the replenishment of storage inventories this injection season.

Last week, the Energy Information Administration (EIA) said stocks as of Aug. 13 were at 2,776 Bcf, which is about 17% below year-ago levels and 6% below the five-year average.

Looking ahead to Thursday’s EIA storage report, estimates are wide ranging. This could be because wind generation was strong at the beginning of the reference week. However, it then tapered off toward the end of the period, as liquefied natural gas (LNG) demand started to recover from prior lows.

The South Central region, a key component of the EIA report, is tough to call even in a normal week in which there isn’t much deviation in demand. The swings in wind generation and LNG make the upcoming storage report all the more tricky.

Ahead of the EIA report, scheduled for 10:30 a.m. ET Thursday, a Wall Street Journal poll of 14 analysts produced a range from a 9 Bcf injection to a 33 Bcf injection, with an average of 28 Bcf. Bloomberg surveyed 10 analysts, and the highest estimate was a 38 Bcf build. The median of the range was 30 Bcf. Reuters polled 17 analysts, whose estimates ranged from a build of 24 Bcf to 42 Bcf, with a median injection of 32 Bcf. NGI modeled a 29 Bcf increase in storage.

For comparison, the EIA recorded a 45 Bcf injection into storage for the similar week last year and the five-year average build is 42 Bcf.

Bespoke Weather Services said there is little reason for prices to move much lower, as that would only serve to retighten supply/demand balances more. This is unnecessary as long as the market is aimed for storage inventories to be around or below 3.5 Tcf at the end of October.

“We know the market likes to overreact, however, but strictly from a data aspect, prices should have more upside risk versus downside,” Bespoke said.

With weather conditions starting to seep into the Northwest and Rockies, along with much needed rain, spot gas prices continued to fall on Wednesday.

The weakness out West carried over into the upstream space, where spot gas prices at the Permian Basin’s Waha Hub tumbled 20.5 cents to average $3.505. Other Texas points were off less than a dime.

Prices shifted a few pennies in either direction across the Midcontinent and Louisiana, while most of the Southeast region moved pennies higher on the day. Transco Zone 5 edged up 2.0 cents to $4.030.East Coast prices also strengthened ahead of projected warm-up this weekend, but gains were small for now. Transco Zone 6 non-NY tacked on 4.5 cents to hit $3.790, and Eastern Gas South moved up 4.0 cents to $3.575.