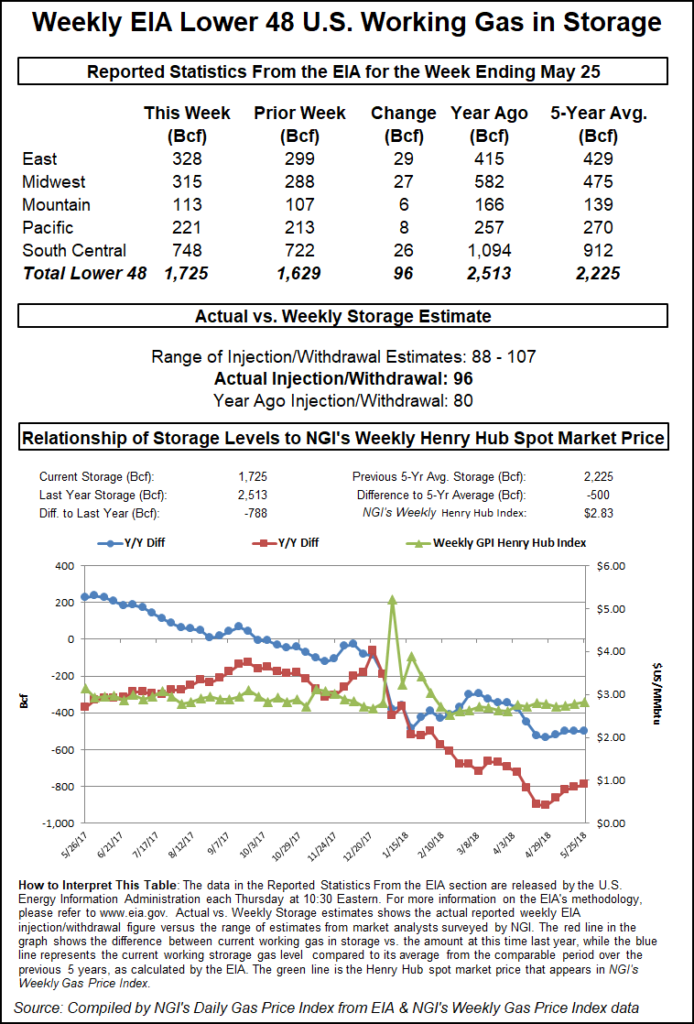 NatGasWeather.com said the midday weather data Thursday “wasn’t quite as hot as the overnight data, thereby viewed as a little cooler trending this round. The data still favors a hot and strong ridge over Texas and the southern Plains over the coming week and expanding it further north into the Midwest and east into the Southeast June 9-13, just not quite as impressively in the most recent data.”

The midday run “could be a temporary flip,” putting the focus on subsequent model runs, the firm said.

“It’s likely the ridge weakens at least some around June 14-16, but that’s still a ways out and there are ways the hot ridge holds stronger and more widespread than the models expect once it becomes established around June 9-10,” NatGasWeather said. “Prices have had a nice run the past couple weeks, but off early week highs and easing several cents since the initial reaction off today’s bullish storage miss.

“The question now is how hot does it need to get to warrant another leg higher in prices to take out $3? Also, at what point will record production show signs of reducing deficits?”

EIA reported a net 96 Bcf injection into Lower 48 gas stocks for the week ending May 25, more than the 80 Bcf build recorded last year but less than the five-year average 97 Bcf injection. The number came in lower than most estimates, giving further momentum to a natural gas futures market already higher overnight on hotter weather trends.

As the figure crossed trading desks at 10:30 a.m. ET, the July contract — already up more than a nickel overnight with forecasters pointing to a more supportive long-range temperature outlook — jumped another 3.5 cents to just under $2.990. By 11 a.m. ET, July was trading around $2.977, up about 9.2 cents from Wednesday’s settle.

Prior to the report, consensus estimates showed the market looking for a build notably larger than the actual figure. A Reuters survey of traders and analysts on average had predicted a 102 Bcf injection, with responses ranging from 88 Bcf to 107 Bcf. A Bloomberg survey had produced a median 102 Bcf injection, with responses from 96 Bcf to 107 Bcf. The Intercontinental Exchange EIA Financial Weekly Index settled Wednesday at an injection of 104 Bcf.

Total working gas in underground storage as of May 25 stood at 1,725 Bcf, versus 2,513 Bcf a year ago and five-year average inventories of 2,225 Bcf, according to EIA. Week/week, the year-on-year storage deficit shrank from 804 Bcf to 788 Bcf, while the year-on-five-year deficit increased slightly from 499 Bcf to 500 Bcf, EIA data show.

By region, 29 Bcf was injected in the East, followed by the Midwest, which saw a 27 Bcf build for the week. In the South Central, 26 Bcf was injected, with EIA recording a 9 Bcf build into salt and 18 Bcf into nonsalt. The Pacific saw a build of 8 Bcf, while 6 Bcf was refilled in the Mountain region, according to EIA.

Bespoke Weather Services said after Thursday’s close that its sentiment “lingers somewhere between neutral and slightly bearish…as we see the market weighing a vast number of potential catalysts.

“On the bullish side, we have a slightly bullish miss in EIA data” on Thursday and the “long-range forecasts…show a pattern capable of more sustained heat mid-month if it were to verify,” Bespoke said. “On the bearish side, we saw an increasingly weak strip…indicating upside is limited as well as impressive short- and medium-term cool trends.”

The potential for more supply to flow on the Rover Pipeline after it secured authorization Thursday for full service on its Mainline B could also weigh on prices, according to Bespoke.

“With weather near average balances are loose enough for rather significant downside for prices, even after today’s print,” the firm said. “This has us continuing to see risk skewed lower in the natural gas market” despite the potential for heat to develop in the longer-term.

Turning to the spot market, prices strengthened throughout the country Thursday, including double-digits gains in the Rockies and California coinciding with restrictions upstream affecting Permian Basin production.

SoCal Citygate added 24 cents to $3.40 after tumbling 54 cents the day before. Southern California Gas was estimating steady demand the next few days at around 2,100,000 Dth/d, along with projected net storage injections of around 400,000 Dth/d.

A force majeure event reducing the El Paso Natural Gas (EPNG) Cimarron meter to zero starting Thursday impacts more than 500 MMcf/d of flows, according to Genscape Inc. analyst Joe Bernardi, who said the event, which was attributed to an anomaly on EPNG’s Line 2000, was expected to last until Tuesday (June 5).

The Cimarron meter, “representing westbound flows on the Intermediate Pressure system in southeast Arizona, had flowed an average of 512 MMcf/d in the past two weeks,” Bernardi said. “There is very limited potential for reroutes, because the two corresponding meters on the High and Low Pressure systems, Bowie and Willcox, have already been flowing near capacity.

Meanwhile, most Rockies points gained by double digits, including Kern River, which jumped 19 cents to $2.21.

“Remnants from Alberto will continue to bring showers over the East the next few days, while a second system over the Midwest will also bring scattered showers but warm south of the front with highs near 90 degrees to Chicago,” NatGasWeather said in its one- to seven-day outlook Thursday.

“Texas and the Southwest remain hot with 90s and 100s as high pressure dominates. The Northwest-Rockies will be mild due to a cool front with showers. This weekend into early next week will bring areas of showers across the northern U.S. with highs of 70s and 80s, while very warm to hot over Texas, the South, and Southwest.”

Prices climbed across the Northeast and Appalachia as forecasts called for some warmer temperatures along the populated Interstate 95 corridor Friday. Radiant Solutions was predicting above normal, cooling degree day-level temperatures Friday and Saturday for Boston, New York, Philadelphia and Washington, DC, including highs in the mid 70s to upper 80s.

Paving the way for higher throughput on Rover, FERC has authorized full service on the 3.25 Bcf/d, 713-mile Appalachian takeaway project’s Mainline B, along with its Supply Connector B. Federal Energy Regulatory Commission staff said Thursday it is still evaluating authorizations for a pair of completed supply laterals. In filings Wednesday and last week, Rover had urged FERC to issue in-service authorizations for several remaining sections of the project by Thursday, including for the Burgettstown and Majorsville laterals, along with the Supply Connector B and the rest of Mainline B.

“Genscape’s infrastructure team has noted that the new facilities and contracts should increase Rover system flows above the recent average of 1.6 Bcf/d, though they do not anticipate the entirety of the system’s capacity to be fully utilized immediately,” Breshears said.

As of Thursday, Rover was flowing just over 1.6 Bcf/d from eastern Ohio to interconnects with the ANR and Panhandle Eastern pipelines in Defiance, OH, according to NGI’s daily Rover Tracker.