After the market initially expressed some disappointment over a large inventory withdrawal that came in on the bearish side of consensus, natural gas futures finished higher for the third straight session Thursday. 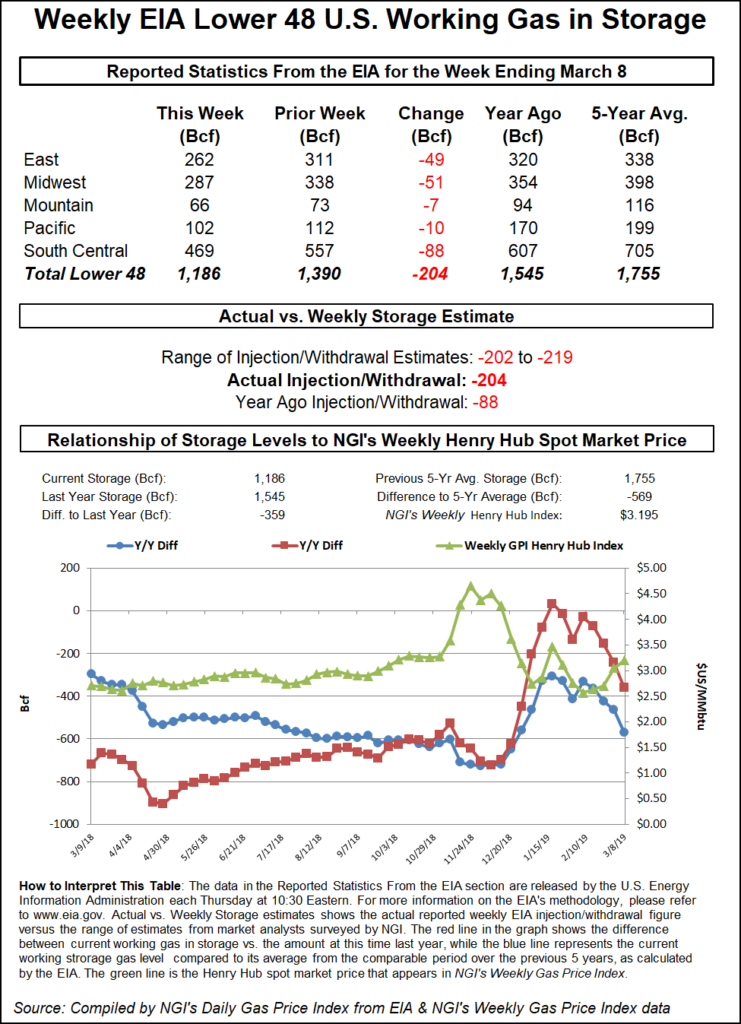 In the spot market, chilly temperatures on tap for the weekend supported gains across the Midwest, Midcontinent and Texas; the NGI Spot Gas National Avg. climbed 9.5 cents to $2.850/MMBtu.

The front-month contract rallied early Thursday on strong cash prices before pulling back slightly after the Energy Information Administration’s (EIA) weekly storage report, according to Bespoke Weather Services. Prices then recovered as “traders digested what was a massive (but expected) salt storage draw and supportive short-term fundamentals.

“Production has dipped the last couple of days, firming up prices as traders mull when production could finally return to the long-predicted record highs,” Bespoke said. “Yet through the day spreads deteriorated, with the winter strip barely participating in the rally at the end of the day. This has us seeing upside for the April contract as very limited over the $2.85 level, as we would be surprised to even test let alone break the highs set last week.”

The EIA reported a 204 Bcf withdrawal from U.S. gas stocks, on the low side of survey ranges, and the news ate into early morning gains in the natural gas futures arena.

The 204 Bcf pull for the week ended March 8 — a week that saw unseasonably frigid temperatures and elevated prices in the cash market — is bullish compared to the five-year average 99 Bcf withdrawal and last year’s 88 Bcf pull.

But market observers had been looking for a hefty withdrawal from this week’s EIA report. Major surveys had pointed to a figure in the 208-210 Bcf range, and some estimates approached 220 Bcf. Intercontinental Exchange EIA financial weekly index futures had settled on a pull of 205 Bcf, while NGI’s model had predicted a 222 Bcf withdrawal.

As for the supply outlook heading into the 2019 injection season, an NGI analysis of guidance from 59 publicly traded independent exploration and production (E&P) companies suggests the dry gas production growth rate could slow this year, but not by a lot. Combined, the E&Ps on NGI’s list grew production by 8.2% in 2018, and guidance suggests they plan to grow output another 6.6% in 2019.

“So for all that talk about capital discipline, and lower gas prices, production among this group is only expected to fall by a little,” NGI’s Patrick Rau, director of strategy and research, said.

Rau noted that NGI’s analysis of the 59 E&Ps — a list that excludes supermajors like ExxonMobil, Shell, BP and Chevron, as well privately held operators — adjusts for major asset sales and mergers to make the year/year comparisons as accurate as possible.

Forecasts advertising cooler temperatures by the weekend and into next week contributed to stronger spot prices through the middle third of the Lower 48 Thursday.

Radiant Solutions was calling for below-normal temperatures from the Midwest down into Texas over the next several days, including lows in the teens and 20s in Chicago and Minneapolis, and temperatures dropping down into the 30s and 40s further south in Dallas and Houston.

In East and South Texas, spot price gains were modest but widespread. Katy notched 6.5 cents to $2.800.

West Texas prices, meanwhile, posted another day of sharp gains. Waha jumped 68.0 cents to average $2.350. Amid pipeline constraints caused by rising associated gas production out of the Permian Basin, Waha has generally traded at a steep discount to Henry Hub in recent months, even veering into negative spot price territory last November. Waha physical basis has improved dramatically over the past week, going from minus $2.175 on March 7 to minus 52 cents Thursday.

RBN Energy LLC analyst Jason Ferguson attributed the stronger West Texas basis this week to a recent drop in production in the region.

A strong low-pressure system that created blizzard-like conditions in parts of the central United States this week was making its way northeastward and was expected to move into Canada by Thursday night, according to the National Weather Service (NWS).

“As it exits the U.S., snow will wind down, but blowing snow” was expected to continue Thursday evening for parts of the Plains, NWS said. “…Additional upper-level energy is expected to move through the Great Lakes region on Friday and Saturday, creating more chances for rain and snow showers. Snowfall accumulations should be light, generally 1-3 inches.”

The Eastern Seaboard, meanwhile, can look forward to a warm Friday, including record-high minimum temperatures in many places and highs into the 70s as far north as the Mid-Atlantic, according to the forecaster.

“That will change on Saturday, however, once the cold front passes and high temperatures in most of the eastern U.S. switch to below average,” NWS said.