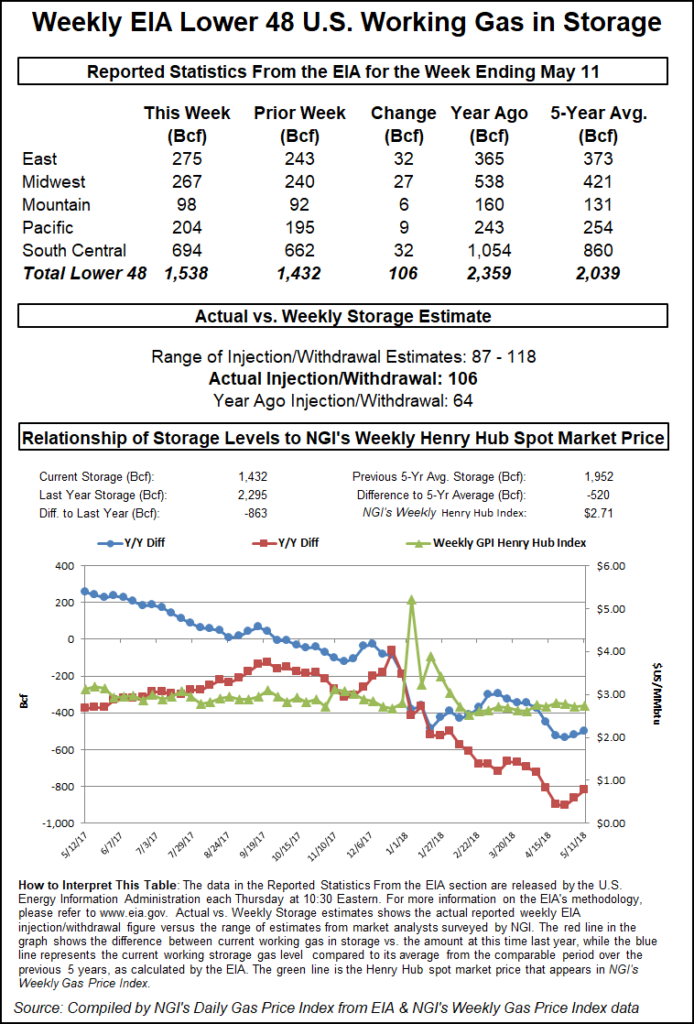 After an initially tepid response to the release of the Energy Information Administration’s (EIA) weekly natural gas storage report, within an hour the June contract began to grind higher, eventually trading as high as $2.862 before settling at $2.859, up 4.4 cents on the day. The July contract added 4.9 cents to settle at $2.886.

EIA reported a 106 Bcf injection into Lower 48 gas stocks for the week ending May 11, close to consensus estimates and larger than both last year’s 64 Bcf build and the five-year average 87 Bcf injection.

Prior to the report, surveys showed the market looking for a build close to the actual number. A Reuters survey had produced an average 105 Bcf build, with responses ranging from 99 Bcf to 118 Bcf. A Bloomberg survey had produced a median build of 107 Bcf, with responses ranging from 87 Bcf to 110 Bcf. ION Energy had called for a 103 Bcf build, while Price Futures Group had estimated an injection of 105 Bcf. Intercontinental Exchange EIA storage futures had settled at an injection of 105 Bcf.

Total working gas in underground storage as of May 11 stood 1,538 Bcf, versus 2,359 Bcf a year ago and five-year average inventories of 2,039 Bcf. The year-on-year storage deficit shrank week/week from minus 863 Bcf to minus 821 Bcf, while the year-on-five-year deficit narrowed from minus 520 Bcf to minus 501 Bcf, EIA data show.

By region, the South Central region recorded a 32 Bcf build for the week, including 12 Bcf into salt and 19 Bcf into nonsalt, according to EIA. The East region also injected 32 Bcf, while the Midwest saw a 27 Bcf build. In the Mountain region 6 Bcf was injected, while 9 Bcf was refilled in the Pacific.

“We thought it was of great interest to see if bulls would be able to hold $2.80 after the report, regardless of the outcome,” NatGasWeather.com said. Thursday’s rally suggests “markets have concerns about hefty storage deficits in spite of today’s large build and strong production.

“…When averaged on weekly time scales, most of the country will be warmer than normal into early June, preventing builds from being much larger than five-year averages, thereby only reducing deficits at a gradual pace, if by much at all,” the firm said. “Again, for the first time in many years we see the pressure on production reducing deficits instead of weather patterns increasing them.”

Despite the larger-than-average build reported by EIA, “storage optics remain bullish and our trajectory through end-October continues to track the 3.55-3.65 Tcf range, which is roughly in line with the historical low of 2014,” Dougherty said. “In addition to the constructive storage story is a strong summer demand picture.

“Exports continue to perform well, and to-date May data indicates there is likely upside to our summer power generation expectation,” she said. “This demand strength has to be offset by good production growth to deliver on our storage target. That growth has yet to be guaranteed, but there is no doubt speculation of its arrival is what is holding back the bulls; can it hold them back much longer?”

Looking at the near-term supply/demand balance, Lower 48 gas production on Thursday was “suppressed for the third day in a row” amid ongoing shoulder season maintenance, according to Genscape Inc. analyst Rick Margolin.

“No major shifts in where the disruptions are located: the Gulf of Mexico, the Northeast and — to lesser extents — Texas and the Rockies,” Margolin said.

“Hot temperatures are in force in Texas and the Southeast/Mid-Atlantic markets, though, which should lift burns headed into the weekend up near 27 Bcf/d,” Margolin said. “Even though top-day burns are low, recent 30-day averages continue outpacing last year same-date by 1.7 Bcf/d.”

Liquefied natural gas exports are up 1.4 Bcf/d year/year (y/y) with Dominion Energy’s Cove Point facility up and running, while exports to Mexico are up 0.6 Bcf/d y/y, according to the firm.

Turning to the spot market, prices continued to retreat across the Midwest and Midcontinent Thursday as Radiant Solutions was forecasting generally above-normal but moderate temperatures Friday and Saturday in regional population centers including Chicago, Cincinnati, St. Louis and Minneapolis.

In the Northeast and Appalachia, a few points continued to show signs of volatility as a number of shoulder season maintenance events have been scheduled in the region recently.

“Numerous showers and thunderstorms will track from the south-central states through the Ohio/Tennessee Valleys and into the Mid-Atlantic region over the next few days as tropical moisture transports northward out of the Gulf of Mexico and interacts with a nearly stationary frontal boundary draped across the region,” the National Weather Service said Thursday. “The best chance for heavy to excessive rainfall will be along the boundary from the central Appalachians to the Mid-Atlantic in association with a weak disturbance lifting northward across the Deep South.”

Radiant Solutions was forecasting slightly below normal temperatures in New York City, Boston and Philadelphia on Friday and Saturday, including highs mostly in the 60s and lows in the 50s.

Starting Friday, East Tennessee Natural Gas is scheduled to run hydrostatic tests on its 3300 Main Line between the Boyd’s Creek and Flatwoods compressor stations in northeastern Tennessee, according to Genscape analyst Josh Garcia.

The operator “will also simultaneously conduct a station outage on the Boyd’s Creek Compressor Station, reducing capacity to zero for the duration of the event,” Garcia said. “East Tennessee’s balance west of Boyd’s Creek matches reported flows relatively closely, and as much as 140 MMcf/d has flowed at this location within the last month. This will also isolate the eastern half of the pipe from the west, and the east will have to source alternative supply during this outage.”

In West Texas, Waha fell by double digits Thursday after enjoying steady gains through the first part of the week. Waha finished at $1.77, down 11 cents on the day.

“The combination of rising production and accelerating activity has resulted in low cash prices and weak forward curves” for oil and gas prices within the Permian Basin, BTU Analytics LLC analyst Jake Fells said in a recent note. “For gas markets specifically, until infrastructure constraints are relieved, Waha could get really weak, potentially going to zero or even negative, as the Permian story evolves from a displacement story to a physical capacity story.”

With Permian economics tied to liquids, and with recent strength in West Texas Intermediate prices, “producers will continue to bring associated gas online without much consideration to gas prices,” Fells said. “That can continue until the pipes are physically full, at which point oil production will be inhibited by gas takeaway constraints,” a situation the firm expects to occur later this year.