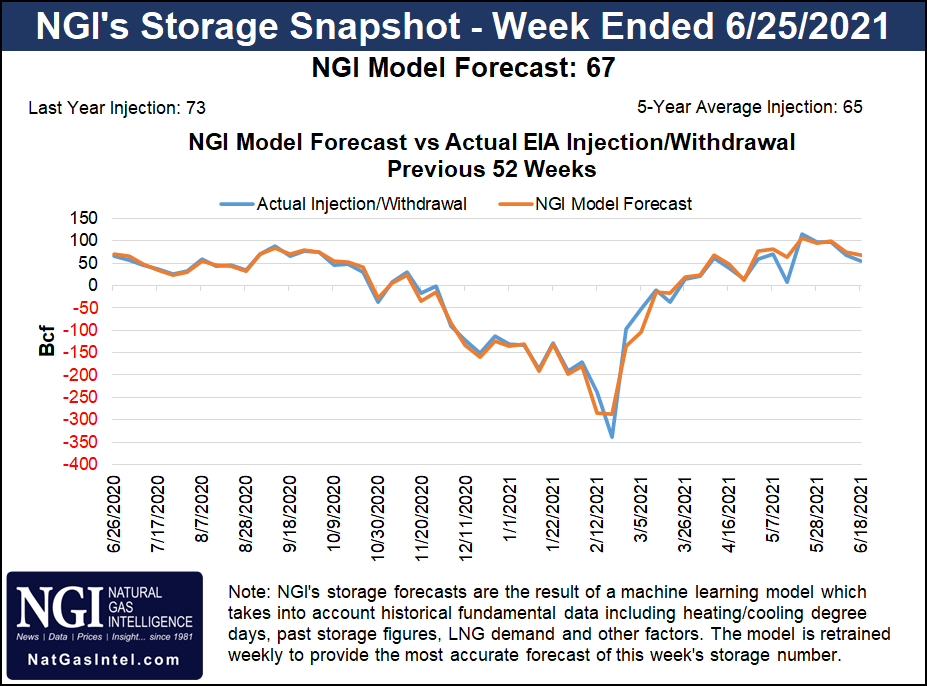 Seven proved to be the natural gas market’s lucky number on Wednesday. Nymex futures managed to overcome an early decline and extended their streak of consecutive gains another day. The August Nymex futures contract settled 2.0 cents higher day/day at $3.650. September edged up 1.8 cents to $3.624.

Spot gas prices, however, buckled across the United States ahead of a much cooler outlook for the East Coast and the Independence Day holiday. Temperatures in the Pacific Northwest, though set to remain hot, were expected to ease a bit. NGI’s Spot Gas National Avg. tumbled 47.0 cents to $3.610.

Wednesday’s gains along the Nymex futures curve did not come easy. The August contract rallied early amid ongoing tightness and continued heat in much of the country. The prompt month hit an early intraday high of $3.756 but failed to maintain the momentum, sliding all the way back to $3.604 before midday.

However, word then started to spread about an operational event upstream of Columbia Gas Transmission (TCO) at MarkWest Energy Partners LP’s Sherwood and Mobley plants in West Virginia. The events were effectively curbing 2 Bcf of production, “necessitating a curtailment of scheduled volumes by the upstream point operators” effective with the intraday 2 cycle for Wednesday to the elapsed prorated scheduled quantity and to zero for timely cycle Thursday.

The unexpected decline in output quickly sent futures all the way to $3.814, even as there continued to be only modest changes in the weather data.

That said, the pattern in July looks to be “very hot,” according to EBW Analytics Group. While demand is still expected to “fall sharply” over the holiday weekend, model runs have shortened the cooler weather in that period to only three days, from Friday through Sunday (July 2-4).

“Three weeks of very hot weather are still predicted nationally” beginning on Monday (July 5) and then spreading east, EBW analysts said. “The market might look past the holiday drop in demand, keeping prices high. At least some profit-taking is likely, though, before the week ends.”

As NatGasWeather pointed out, however, it’s not only weather that’s driving the gas market. Supply/demand balances were tighter on Wednesday versus Tuesday because of a drop in Lower 48 production, along with a rise in power burns to near 40 Bcf.

“Of course, it helps weather patterns remain hot enough to be considered bullish July 6-14, and likely longer,” NatGasWeather said. “We also need to watch for the potential of a tropical cyclone tracking through the Caribbean this weekend, as it has the potential to become a threat to the U.S. after.”

In a 2 p.m. ET update, the National Hurricane Center said showers and thunderstorms continued in association with a tropical wave over the Lesser Antilles. The system had become less organized since Tuesday, and significant development was no longer expected while it moved quickly westward across the Caribbean Sea.

Thursday’s government storage data also is likely to be closely scrutinized. Estimates ahead of the Energy Information Administration’s (EIA) were close to the five-year average injection of 65 Bcf and last year’s 73 Bcf build.

A Bloomberg survey of 11 analysts produced a range of estimates from 59 Bcf to 75 Bcf, with a median of 68 Bcf. Reuters polled 18 analysts, whose estimates were as low as 55 Bcf and had a median injection of 68 Bcf. NGI modeled a 67 Bcf build.

The EIA’s weekly storage inventory report is scheduled to be released at 10:30 a.m. ET Thursday.

Spot gas prices were a sea of red as temperatures started to moderate.

NatGasWeather said national demand would ease late this week through the coming weekend as a slow moving weather system tracks across the Great Lakes and eastern United States. This would cool highs into the upper 60s to lower 80s.

On Wednesday, though, the New York City area’s utility Con Edison Inc. (ConEd) reduced voltage by 8% to some neighborhoods in Queens while crews worked to repair equipment amid the intense heat. The voltage reduction affected about 64,000 customers, and the company was urging conservation across its service territory.

ConEd projected that demand for electricity would reach 12,300 MW on Wednesday, exceeding last year’s peak of 11,740 MW. Since the heat wave began on Sunday, crews had restored service to an estimated 27,500 customers. They were working to restore about 2,900 more, including about 2,300 in Brooklyn.

The scorching temperatures also were having adverse impacts in Western Canada, leading to so-called hot-offs.

Aegis Hedging Solutions said in a note several compressor stations had gone offline for periods of time because of the extreme heat. The unplanned compressor outages began last weekend and resulted in a decline in field receipts. The reduced receipts are expected to persist for several days until temperatures moderate.

The operational stress experienced on the Nova Gas Transmission Ltd. (NGTL) system showed up in the balances on Tuesday. Volumes declined to around 3.5 Bcf and NGTL had a “very unusual” withdrawal of 0.7 Bcf, according to Aegis.

Prices, meanwhile, remained strong in Western Canada on Wednesday. Though gains were small, they compared with the widespread, steep losses that occurred in the United States.

The SoCal Border Avg. cash price was down 80.5 cents, but prices remained elevated at an average $4.735.

Upstream in the Permian Basin, Waha next-day gas fell 19.0 cents to $3.525, which was a bit steeper decline than the rest of Texas.

In Appalachia, the TCO restrictions provided a bit of support to prices. Although Columbia Gas spot gas prices fell 18.0 cents day/day to $3.040, the loss was far less severe than at other points in the region.Downstream, PNGTS posted a substantial $6.695 drop, averaging $5.225 for Thursday’s gas day. Transco Zone 6 NY was down 77.5 cents to $3.185.