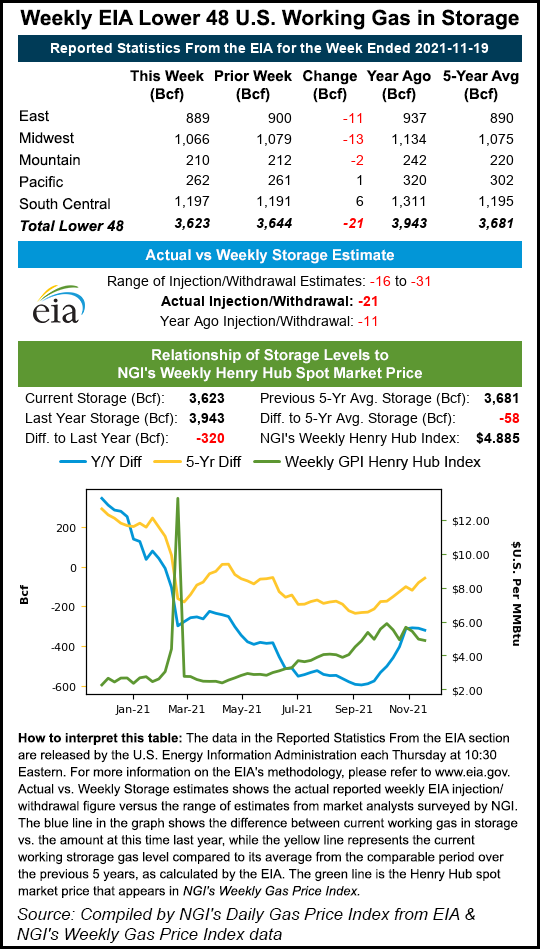 The EIA’s weekly inventory report was published at noon ET on Wednesday because of the Thanksgiving Day holiday.

Natural gas futures prices were several cents higher in anticipation of the season’s first pull and strengthened further as the EIA figure confirmed some tightness in supply/demand balances. The December Nymex futures contract was hovering just above $5.00/MMBtu in the minutes leading up to the EIA report and then popped to around $5.04 as the print crossed trading desks. By 12:30 p.m. ET, the prompt month was trading at $5.086, up 11.9 cents from Tuesday’s close.

Broken down by region, Midwest stocks fell by 13 Bcf while East inventories were down by 11 Bcf, according to EIA. The Mountain region recorded a 2 Bcf withdrawal, but the Pacific posted a 1 Bcf injection.

Participants on The Desk’s online energy chat Enelyst said most regions’ net changes were in line with expectations. The East pulled out a little less than expected, but market observers chalked it up to unsupportive weather.

Of the overall withdrawal, one Enelyst participant said, “Quite solid on a wind week that did upper 50 average GWhs.”

Total working gas in storage as of Nov. 19 stood at 3,623 Bcf, which is 320 Bcf below year-ago levels and only 58 Bcf below the five-year average, according to EIA.

As for next week, Enelyst participants pegged the next draw to be much larger, with early estimates in the 50s Bcf and 60s Bcf. The Thanksgiving holiday impact was said to be a wild card, especially as production has increased throughout the week.