Natural gas futures continued to climb on Wednesday despite starkly bearish near-term fundamentals, including the potential for a record fall storage injection. After hitting a $7.022/MMBtu intraday high, though, the Nymex November gas futures contract settled Wednesday at $6.930, up only 9.3 cents day/day. December futures climbed 6.2 cents to $7.236. 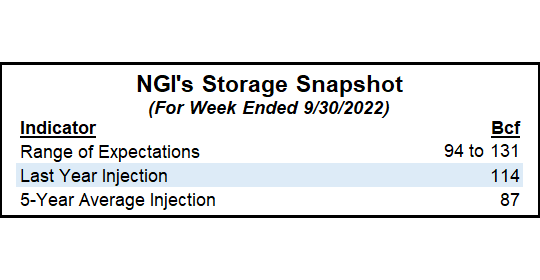 Spot gas prices continued to strengthen as well, with the East Coast gearing up for an early season cold blast. NGI’s Spot Gas National Avg. picked up 81.0 cents to $6.005.

After two days in the green for Nymex futures in spite of unsupportive fundamentals, Vortex Commodities CEO Brian Lovern told NGI the rally could be tied to macro buying in the energy complex. He noted gains in oil prices, as well as the Energy Select Sector SPDR Fund (XLE). The XLE index is seen as a representation of the energy sector of the S&P 500 Index.

“That buying probably fed into natty too and contributed to the move,” Lovern said.

The trader also noted that there has been market chatter related to Freeport LNG’s return. While this would be supportive for gas prices, “nothing they have said could be trusted up to this point.”

The liquefied natural gas terminal has been offline since early June following a fire. Management initially said the facility would return to partial service in October, but then pushed back the timeline by a month. Full operations would not occur until March.

Cove Point LNG also is down for planned maintenance, with the supplies not being delivered to the two export facilities available for storage.

Are Record Injections Ahead?

After a sluggish pace of rebuilding throughout the summer, the gas market has been able to accelerate restocking now that temperatures have dropped from the record levels. Though pockets of heat continue in Texas, and at times the West, recent government inventory data has pointed to a much improved trajectory in the final weeks of the traditional injection season.

Lovern said after back-to-back triple-digit storage builds, inventories appear “almost a lock to be higher than 3.5 Tcf” at the end October.

“Odds are we are okay this winter, as we will need a lot of cold for major issues,” he said. “But of course, it’s not a done deal just yet.”

The gas market is rapidly approaching the time of year when weather starts to “drive the bus,” according to the trader. “So far, October is not looking nearly as warm/bearish as everyone expected. Obviously it’s just October, but it becomes very interesting if that trend continues.”

Shorter term, Lovern is uncertain the recent price rally has staying power. After all, the next two Energy Information Administration (EIA) numbers “look just enormous,” and an even higher injection is possible if scrapes are confirmed. He pegged Thursday’s build at 125 Bcf.

Other estimates ahead of the next EIA report were wide ranging, indicating a lack of clarity of how much of near-record supply is winding up in storage.

Total working gas in storage as of Sept. 23 stood at 2,977 Bcf, which is 180 Bcf below year-earlier levels and 306 Bcf below the five-year average.

Looking ahead to the next EIA report, which would represent balances for the current week ending Oct. 5, Mobius Risk Group pointed out a key fundamental that could impact gas demand – and thus storage.

Wind output has been lower in Texas, with the Electric Reliability Council of Texas (ERCOT) showing wind-generation peaking at just under 12 GW on Tuesday and bottoming out at 2.5 GW.

“This is considerably weaker than average ERCOT wind output over the past several weeks, and as a result gas fired power is likely to be filling the gap for lower wind,” Mobius gas analyst Zane Curry said.

The analyst noted that the decline in wind generation is set to occur just as the Lone Star State warms back up for the rest of the week. Highs in Houston were forecast to climb back to 90 by Friday, about 10 degrees higher than last week.

Spot gas prices jumped back above $6 – or very close to it – at the majority of U.S. locations during Wednesday trading.

Price gains from the Southeast to the East Coast continued to be driven by a stagnant upper-level low that was producing breezy conditions and chilly overnight temperatures over those regions. The National Weather Service (NWS) said the cooler-than-normal weather was set to continue, with the crisp fall air pushing south on the west side of the system into Alabama and Georgia.

With power restoration efforts largely complete in Florida and other areas impacted by Hurricane Ian, the heightened gas demand was reflected in cash prices. Florida Gas Zone 3 next-day gas shot up 74.5 cents on the day to average $6.460, and Transco Zone 5 edged up 93.0 cents to $6.415.

NWS forecasters said mostly comfortable midweek temperatures in the Midwest were expected to give way to a strong cold front that would quickly push southward across the Northern Plains and into the region. High temperatures behind the front in the Northern Plains, Upper Mississippi Valley and Upper Great Lakes were forecast to plunge by 20-25 degrees into the mid-40s to low 50s. Frigid morning lows would follow Friday morning, with widespread temperatures below freezing across the area. Some areas in North Dakota and Minnesota may  dip as far as the low to mid-20s.

“This front will continue south and eastward Friday becoming the dominant story temperature-wise in upcoming forecasts,” NWS said. “Lake-effect showers are also in the forecast for the Upper Great Lakes.”

Locations in Louisiana recovered sharply midweek amid rising temperatures and recovering cooling demand. Henry Hub was up 65.5 cents to $6.055, and Transco Zone 3 was up 93.0 cents to $6.200.

Wood Mackenzie said the pipeline declared a force majeure on Line 1300, essentially cutting capacity in half at Capock N in Lea County, NM. As of Tuesday’s Intraday 1 cycle, operational capacity was reduced by 313,882 MMBtu/d, down to 307,818 MMBtu/d, leading to a cut in flow of 183,144 MMBtu/d on Tuesday’s gas day versus Monday’s gas day.