Storage data that proved to be a non-event made for the third quiet trading session this week for natural gas futures prices. The September contract settled Thursday at $2.159, down 1.1 cents, and October slipped 1.4 cents to $2.163. 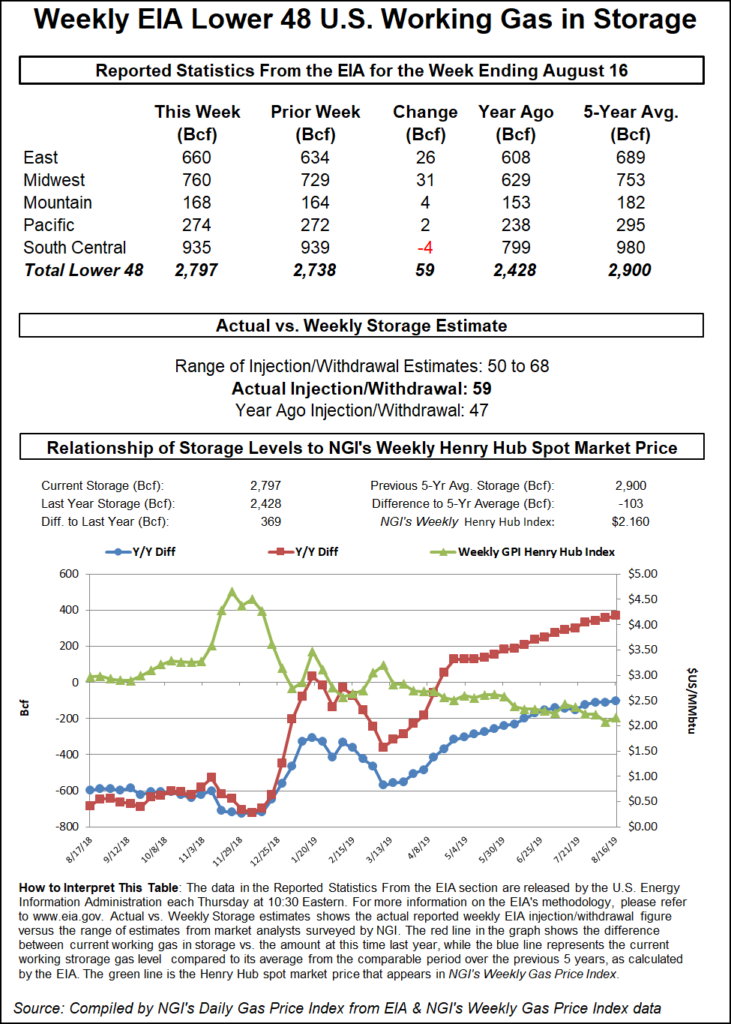 Spot gas prices were more convincingly lower on Thursday as demand continues to retreat from recent peaks, with cooler air continuing to move across the country. Most regions put up moderate losses of less than a dime, but Northeast prices fell more dramatically amid the cooler shift. The NGI Spot Gas National Avg. ultimately dropped 7.5 cents to $1.880.

The sell-off in cash prices was partly credited for Wednesday’s nickel move lower for the September Nymex futures contract, along with cooler weather finally moving in. Even though forecasts trended even cooler on Thursday, all eyes were on storage.

Last week, the Energy Information Administration (EIA) stunned the market with a storage injection that was about 10 Bcf shy of what analysts had expected. On Thursday, the EIA data indicated that last week’s hugely bearish surprise was a one-off event and not indicative of any major stepchange in storage activity.

The EIA reported a 59 Bcf injection into inventories for the week ending Aug. 16, which fell well within the range of expectations but was a few Bcf below several highball estimates. The build compared with last year’s 47 Bcf injection and the five-year average injection of 51 Bcf.

Prices initially bumped higher after the EIA report was released, but then retreated and fluctuated in a tight less than 5-cent range for the rest of the session.

Bespoke Weather Services said the 59 Bcf injection was “not the complete rejection” of last week’s hugely bearish storage stat that a lot of the market seemed to fear, given fewer gas-weighted degree days (GWDD) for the week, but was a little looser. With liquefied natural gas (LNG) resuming full operations, the firm said next week’s number could “certainly be in the 40s, perhaps under our early guess of 49 Bcf, which would be a tighter number if that pans out.”

Ahead of the EIA report, a Bloomberg survey of 13 analysts showed a build between 50 Bcf and 68 Bcf, with a median of 56 Bcf. A Reuters poll had the same range, but a median of 60 Bcf. NGI had also called for a 60 Bcf build.

Broken down by region, the Midwest injected 31 Bcf, while the East added 26 Bcf. Small builds were seen in the Mountain and Pacific region, and the South Central posted a net 4 Bcf withdrawal after salt facilities withdrew 9 Bcf and nonsalts injected 5 Bcf, according to EIA.

Total working gas in storage as of Aug. 16 stood at 2,797 Bcf, which is 369 Bcf more than last year at this time but still 103 Bcf below the five-year average, EIA data show.

Since early May, the salt storage deficit versus the five-year average has grown from only 14 Bcf to 48 Bcf as of the week ending Aug. 16. The steep reduction in salt storage supplies is a possible bullish signal, should the market experience a cold start to winter later this year, as without robust salt storage reserves, sharply higher natural gas prices may be required to coax marketers into releasing storage inventories, according to EBW Analytics Group.

Currently, however, the spread between the September and January 2020 contracts — one measure of potential profitability for salt storage operators hedging their business — has declined to only 35.9 cents, one of the lowest spreads since May, according to EBW. “This declining spread may reduce, rather than enhance, salt storage operator injection activity in the weeks ahead.”

If salt storage inventories remain below normal levels, a cold beginning to winter may lead a demand-side shock to natural gas balances, EBW said. With a reduced supply-side response to higher demand with less natural gas in storage, prices may have to move higher to balance supply and demand, “potentially sending Nymex futures sharply higher later this fall if bullish weather conditions materialize.”

Steamy conditions remain in Texas and parts of California, but cooler air sweeping across the Midwest and Ohio Valley pressured spot gas markets on Thursday. Losses were widespread as temperatures even in the Lone Star State were expected to retreat to the lower 90s ahead of the weekend thanks to a storm system that was forecast to increase cloud coverage and dump heavy rain in some areas.

On a national level, Genscape’s demand projections for the coming two weeks is about 16 Bcf lower in aggregate than the forecast for the same period made on Monday. The firm’s meteorologists are forecasting Lower 48 population-weighted CDDs will average 107 between Thursday and Sept. 2. On Monday the forecast was showing a warmer 113 CDD average.

“With weather expectations revising cooler, our forecast for demand has decreased from an average 73.8 Bcf/d to Thursday’s estimate of 72.5 Bcf/d through Sept. 2,” Genscape senior natural gas analyst Rick Margolin said. “During that period, we have demand hitting a peak of 75.9 Bcf/d on Aug. 28 and a low of 67.2 Bcf/d on Sept. 1.”

Indeed, an even stronger weather system and cool shot is expected into the northern and central United States mid next week. The cool pattern is forecast to then move across the South and East and where the data remains quite bearish, according to NatGasWeather. The firm expects the mild weather to last at least through the first week of September.

As for prices, the Northeast posted some of the largest declines of the day, with Tenn Zone 6 200L shedding some 32 cents to average $1.84. Regional points along the Transcontinental Gas Pipe Line also lost around 30 cents day/day.

In Appalachia, Transco-Leidy Line next-day gas came off 26 cents to average $1.585, although Columbia Gas was down just a nickel to $1.915.

Lower 48 production has been off earlier highs in recent days to various pipeline maintenance events, with the East making the largest contributions to the declines, down more than 0.75 Bcf/d with heavy concentrations of declines out of northeast Pennsylvania, according to Genscape.

As for Permian prices, Waha jumped 14.5 cents to $1.11, which was in line with other prices seen in West Texas.

Spot gas prices were mixed in the Midcontinent, with a sharp move higher for NGPL Midcontinent and a steep decline for Northern Natural Ventura.

The Midwest posted losses between a nickel and 20 cents, while Louisiana and Southeast prices slipped mostly a few pennies on the day.