Natural gas futures struggled to gain traction early Monday, but continuously strong export demand eventually pushed prices into the green. With options and the May Nymex contract’s expiration looming, the prompt month settled at $2.790, up 6.0 cents from Friday’s close. The June contract picked up 5.6 cents to land at $2.874. 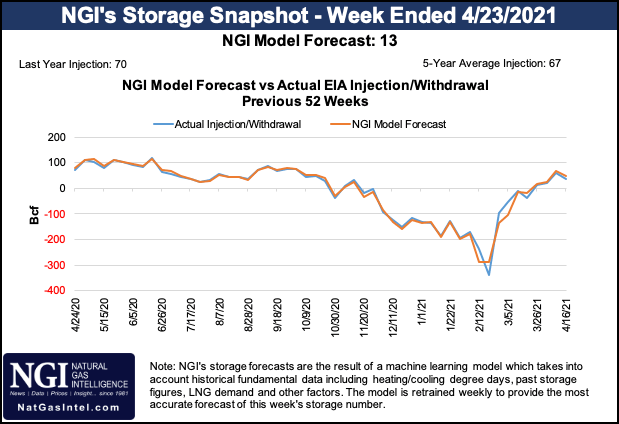 Spot gas prices were mixed as the East and West coasts put up notable gains, while the rest of the country softened. NGI’s Spot Gas National Avg. climbed 3.5 cents to $2.605.

After last week’s late-season cold snap provided the futures market with a final blast of heating demand and boosted prices, weather models reflected a “quite bearish” pattern for most days through mid-May, according to NatGasWeather. Forecasts showed daytime temperatures mostly in the 60s to 80s across the United States, with only spotty areas of chilly overnight lows.

However, export demand has continued to be robust, helping to stave off any significant declines for Nymex futures. Liquefied natural gas (LNG) feed gas came in not far below record highs over the weekend and on Monday, near 11.5 Bcf, according to NGI data.

The strong LNG export demand has repeatedly aided in the resilience of Nymex futures. Further strength is likely in the coming months as more of the super-chilled fuel is needed to replenish storage inventories overseas, according to analysts. European stocks, for example, finished the traditional withdrawal season about 11% below the five-year average, but late-season cold expanded the deficit to about 23%.

At the same time, pipeline exports to Mexico also have been strong. Cross-border flows reached a record 7.1 Bcf/d on April 14 and have generally remained not far off that level since, despite the absence of significant heat.

“LNG exports and pipeline exports to Mexico, increasingly important components of U.S. demand for natural gas, have been very strong — and could remain so for the next several months,” said EBW Analytics Group.

Local distribution companies also are expected to start ramping up their storage injections, according to EBW. As this occurs, cash prices could strengthen considerably, potentially topping $3.00.

In addition, there may be an increased interest in hedging stemming from February’s freeze and the record price spikes that resulted across Texas and the Midcontinent, the firm said. This could drive up prices for the 2021/2022 winter-month contracts and pull up the front end of the curve.

“While prices could soften this week, any pullback is likely to be modest,” EBW said.

Though volatility could increase even without big changes in fundamentals, the market could make another big move after Thursday’s government storage inventory report. Early data ahead of the Energy Information Administration’s (EIA) report showed injection estimates ranging from 7 Bcf to 13 Bcf. NGI’s model projected a 13 Bcf build.

This compares with last year’s 70 Bcf injection and the 67 Bcf five-year average build, according to EIA.

NatGasWeather said the coming span of mild weather may result in the deficits shrinking back to near the five-year normal in time for more impressive summer heat to begin building in late May or early June.

“Our expectation is that deficits in supplies versus the five-year average would gradually increase from June through August as a hotter-than-normal summer cashes in on a just tight enough supply/demand balance to give supplies a bullish background state, assuming production doesn’t increase more than expected.”

Spot gas prices across the country were mixed on Monday as chilly weather boosted prices on the East Coast, while a fresh weather system moved into the West and lifted prices there.

The rest of the Lower 48, however, saw lower prices to start the week, with no significant heating or cooling demand on tap for this week.

The National Weather Service (NWS) said an upper-level low was forecast to develop in the West, bringing temperatures 15-20 degrees below average over the Great Basin/Southwest. Rain and higher elevation snow were also possible across parts of the Pacific Northwest/California to the Northern Rockies/Great Basin/Southwest through Tuesday.

The associated front was forecast to move into the Central/Southern Rockies, producing snow and lower-elevation rain through early Wednesday.

Meanwhile, Wyoming Interstate Co. pipeline on Monday began planned maintenance at the “Threemile Lateral to Rex” location that reduced capacity to zero. The work is expected to last through Friday.

East Coast markets posted even steeper increases despite a quick warmup from the recent cold snap. However, it’s how rapidly temperatures are forecast to rise that may be lending support to prices.

AccuWeather said daytime temperatures in Washington, DC, could reach 90 degrees by Wednesday, challenging the record of 92 set in 1957. New York City is forecast to see a high of 85 on Wednesday, and temperatures could rise into the 80s all the way into parts of southern New York and southern New England, according to the forecaster.

“Daytime highs in most of the Northeast, from southern New England through the mid-Atlantic, will be 15-20 degrees above normal for late April, and closer to what is normal for later June,” AccuWeather said.