Natural gas futures continued to peel back midweek as production ticked higher and export demand retreated. Staring down a softer storage injection week/week, traders sent the May Nymex futures contract down another 3.5 cents to $2.692. June slipped 2.7 cents to $2.776. 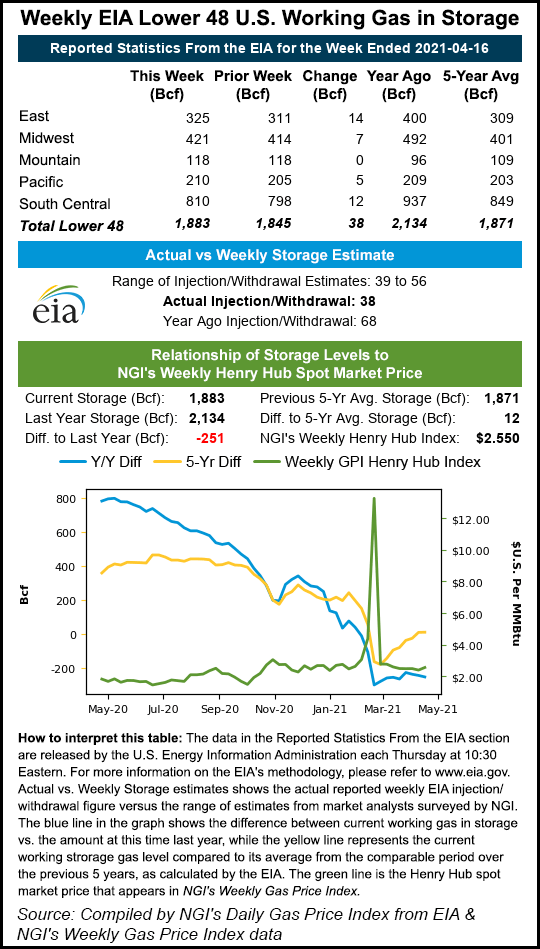 Spot gas prices also declined across most of the country, but dollar-plus gains in the Northeast helped to lift NGI’s Spot Gas National Avg. up 4.0 cents to $2.690.

Though the weather data has maintained a chilly outlook through April 27, the warm-up expected thereafter may be starting to pressure prices. NatGasWeather said the midday Global Forecast System weather model was a little chillier later this weekend and early next week as cool air is expected to linger across the northern United States slightly stronger and longer. However, the latest data held onto the “slightly bearish” pattern April 27-May 5.

On the production front, output took a dramatic decline last weekend, according to Wood Mackenzie. The firm said output fell from 92.1 Bcf/d on April 16 to 90.3 Bcf/d on Monday and then to a recent low of 89.4 Bcf/d on Tuesday.

Most of the decline in output was attributed to the Northeast, where Southwest Pennsylvania (SWPA) production dropped by 0.8 Bcf/d to 7.1 Bcf/d on Tuesday. The receipt points responsible for the decreased receipts were gathering system interconnects in Greene County.

“Because of the location of the points and the timing of the flows, the temporary outage appears to be operator field maintenance, common during these shoulder season months,” Wood Mackenzie analyst Nichole McMurrer said.

In addition, Wood Mackenzie said Harmon Creek processing plant receipts onto Rover Pipeline dropped to zero on Tuesday. The firm noted that receipts remained at zero for Wednesday’s gas day, but recovered up to 185 MMcf/d for Thursday’s gas day.

Permian Basin production in the Texas portion of the play also fell over the weekend. Output dropped to 8.5 Bcf/d on Tuesday from 9.3 Bcf/d last Friday. However, production appeared to be recovering a bit at midweek, according to the firm.

McMurrer attributed the Permian declines to planned maintenance along El Paso Natural Gas Pipeline and said outages at the Eunice station could continue until Monday (April 26), with flows dropping to zero at various points.

In addition, Bespoke Weather Services said power burns remained “quite weak” in its weather-adjusted model, so the changes day to day were in the bearish direction. These changes, according to the firm, indicated that a dip back to “$2.65-2.68 is more likely than a retest of $2.75, at least in the near term.”

NatGasWeather said bulls appear to be taking minor profits ahead of Thursday’s storage report and ahead of the May Nymex contract’s expirations next week. “We expect the combination of the two will lead to increasingly volatile sessions in the days ahead.”

The Energy Information Administration (EIA) is set to release its weekly storage at 10:30 a.m. ET on Thursday, with market expectations pointing to a lower injection week/week. A Bloomberg survey of nine analysts produced builds ranging from 39 Bcf to 56 Bcf, with a median 47. Reuters polled 18 analysts, who came up with the same range of estimates but with a median increase of 49 Bcf. NGI’s model projected a 47 Bcf build.

This would compare with the 68 Bcf that was injected into storage during the same week last year and the 26 Bcf five-year average build, according to EIA.

As of April 9, total working gas in storage stood at 1,845 Bcf, which is 242 Bcf below year-ago levels but 11 Bcf above the five-year average, the agency said.

As for technicals, analyst Brian Larose of ICAP Technical Analysis said the June Nymex contract’s structure up from the March low was essentially the same, though resistance levels differed slightly. Larose sees two options. Either natural gas is carving out a more significant bottom, he said, or a corrective “a-b-c bounce” is currently in progress.

That may be a tall order for the June contract, which currently sits arounds 10 cents below that first level of resistance. However, there are several factors working in bulls’ favor.

Chief among these is LNG demand. Though dips in LNG feed gas volumes are common during the shoulder season because of maintenance events, the long-term outlook for the super-chilled fuel is bright. Baker Hughes Co. said it expects LNG demand to improve as governments around the world accelerate the transition toward cleaner sources of energy.

The company previously called for 550-600 million metric tons/year (mmty) by the end of the decade. “Based on recent third-party analysis and directionally supported by discussions with some of our customers, we now see the potential 600-650 mmty of global LNG demand by 2030,” said CEO Lorenzo Simonelli during a first quarter conference call.

A sea of red spread across most spot gas markets in the Lower 48 on Wednesday despite the lingering cold resulting from a series of weather systems across the country.

NatGasWeather said a stronger-than-normal weather system and associated cold shot continued to spread across the United States. Soon, this system would cover much of the Rockies, Midwest and Great Lakes, it said.

The forecaster expects overnight lows to drop into the 20s and 30s, while also bringing areas of rain and snow. The southern part of the country also is forecast to be cooler than normal, but this time of year, that is expected to result in less demand from impressive early-season heat.

Larger declines were seen at Northern Natural Ventura in the Midcontinent, which tumbled 10.5 cents day/day to $2.605. Chicago Citygate was down 13.5 cents to $2.675.

AccuWeather said across parts of southeastern New England, including in Rhode Island and eastern Massachusetts, thunderstorms and gusty winds were possible late Wednesday, with chilly air left in their wake. “Once the new air mass settles into the Northeast and mid-Atlantic, the chill will squash the chances for severe weather across the region for the rest of the week.”