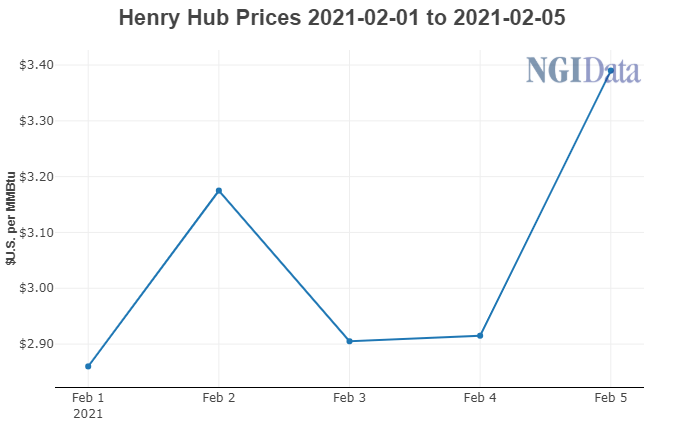 Cash prices strengthened, however, as the polar plunge descended into the Midwest before slowly crawling toward the East Coast. NGI’s Spot Gas National Avg. climbed 76.0 cents to $4.010.

Though he doesn’t have the best track record, Punxsutawny Phil’s prediction of six more weeks of winter may have some legs. NatGasWeather said moderate demand over the past week began increasing on Friday as a frigid Arctic shot over Western Canada advanced into the U.S. Rockies and Plains. The biting cold was seen spreading across the Great Lakes, Ohio Valley and Northeast, sending temperatures plummeting to some 20 degrees below zero in some areas. Bitter conditions were forecast into North Texas, the South and the Southeast.

The weather data backed off the amount of bone-chilling air that would circulate farther south, but NatGasWeather said a consequence of the cold being slower to initially release is that it allows it to build to more “dangerous/impressive” levels when it finally does so around Feb. 11-15.

This cold shot is likely to lead to wellhead freeze-offs, and the forecaster projected around 2.5-3 Bcf/d of production being shut in. Other analysts have indicated that as much as 4 Bcf/d of output could be temporarily curtailed following freeze-offs.

Even with a solidly frigid outlook for the first half of the month, and the likelihood of supply cuts, traders quickly showed their displeasure with the Friday afternoon run of the European weather model. The latest data wasn’t quite as cold for the 15-day period, giving back about 15 Bcf of demand.

Though still “impressively cold,” NatGasWeather said it was “easily possible” the data would back off the forecast demand. “This was bad timing for bulls,” the firm said, and if the model were to trend any milder, “it could lead to major disappointment, especially if the Global Forecast System were to follow suit.”

The latest European model continues to show “easily the coldest pattern of the past few years, but bulls appear to have gotten spooked that more demand could be shed over the weekend and ran for the exits.”

Meanwhile, traders on Friday were still processing the latest government storage data. Though fears of a storage crunch this winter largely have fallen by the wayside, Thursday’s 192 Bcf withdrawal — and the multi-week span of intimidating cold and robust demand — quickly brought supply back in focus.

Tudor, Pickering, Holt & Co. (TPH) analysts said combined with the accompanying freeze-offs, the Energy Information Administration’s (EIA) next reported withdrawal should push well into the 200s Bcf. Furthermore, it’s possible the current surplus to the five-year average of 11%, or 261 Bcf, is gone by the end of the month.

“For a structurally undersupplied market, we see this as a very strong setup,” TPH said. “And while storage is too high with too few winter days remaining to drive a 2014 pricing event, the massive pull on storage will further strengthen our already strong conviction on reaching $3.50/MMBtu by year end.”

Mobius Risk Group noted that inventories in the Midwest and East are below their respective year-ago levels. At 582 Bcf, East stocks are 27 Bcf below year-ago levels, while Midwest stocks of 719 Bcf are 16 Bcf lower year/year.

“Both are regions to watch with the coldest weather unsurprisingly being forecast in the Mid-Continent and Northeast,” Mobius said. “Over the next two weeks, these regions will carry the bulk of the temperature deviation versus normal.”

Total working gas in storage as of Jan. 29 stood at 2,689 Bcf, which is 41 Bcf higher than year-ago levels and 198 Bcf above the five-year average, according to EIA.

Export demand has been firing on all cylinders throughout the winter on strong demand in Asia that have subsequently lowered storage inventories in Europe. Though well off January highs, analysts see gas prices overseas remaining strong enough to incentivize imports from the United States well into the summer.

However, there may be some wrinkles in the near term. Moran Shipping Agencies Inc. on Thursday posted a notice regarding the high risk for sea fog to reduce visibility at ports along the Gulf Coast beginning Monday and lasting until Wednesday. That could threaten liquefied natural gas (LNG) shipping operations early in the week, the result of which could prompt a brief decline in LNG feed gas demand, according to Wood Mackenzie.

Most recently, from Jan. 20-23, heavy fog impacted Sabine Pass liquefaction facility operations as ship traffic was halted in the waterway. During this time, feed gas demand to the facility declined by as much as 1.3 Bcf/d as Trains 1 and 5 ramped down operations, Wood Mackenzie said.

“Over the past week, U.S. LNG feed gas demand from interstate pipelines has averaged 10.1 Bcf/d; however, these levels could be significantly reduced if the current visibility forecast materializes.”

U.S. exports of LNG outstripped natural gas exports by pipeline in November, marking only the second time that has happened in more than 20 years, the EIA said in a new report. LNG exports exceeded gas delivered via pipeline by nearly 1.2 Bcf/d in November amid the strong demand from Asia mounted ahead of the core of winter.

Nymex futures traders may not have been able to keep prices above $3.00 on Friday, but cash traders sure did. Fueled by the deep freeze penetrating the Lower 48, sharp increases were seen across the country ahead of the weekend.

Benchmark Henry Hub shot up 47.5 cents to $3.390 for gas delivery through Monday. Similarly stout gains were seen across Texas as well, where Houston forecasters were calling for the possibility of icy conditions by Valentine’s Day. Houston Ship Channel jumped 35.0 cents to $3.210.

Chicago Citygate spot gas surged 55.5 cents day/day to $3.500, while Northern Natural Demarc soared 76.5 cents to $3.780 amid some operational limitations in place across the pipeline system.

Wood Mackenzie said Texas Eastern Transmission notified customers of an unplanned outage Thursday at the Shermans Dale compressor station near Shermans Dale, PA. The compressor is on the Penn-Jersey Line in the M3 tariff zone.

Although the outage was expected to last only one day (Friday), operational capacity was reduced to around 3 Bcf/d, down about 281 MMcf/d, according to Wood Mackenzie analyst Matthew McDowell. The analyst did not see a significant risk for a blowout at M3, but said risk is present in the coming days as cold weather moves into the Northeast “if this compressor issue has not been resolved.”

Not to be outdone, New England pricing hubs staged a major comeback from Thursday’s lull, though prices remained a couple of dollars short of earlier highs. Algonquin Citygate cash jumped $4.045 to average $11.465. Transco Zone 6 NY was up $1.485 to $4.520.