An on-target storage report from the Energy Information Administration (EIA) gave neither the bulls nor the bears much to feast on Thursday as futures gained slightly on the day. In the spot market, prices pulled back somewhat in the hot Southwest, while milder temps accompanied small adjustments in the Midwest and East; the NGI Spot Gas National Avg. added 3.5 cents to $2.080/MMBtu. 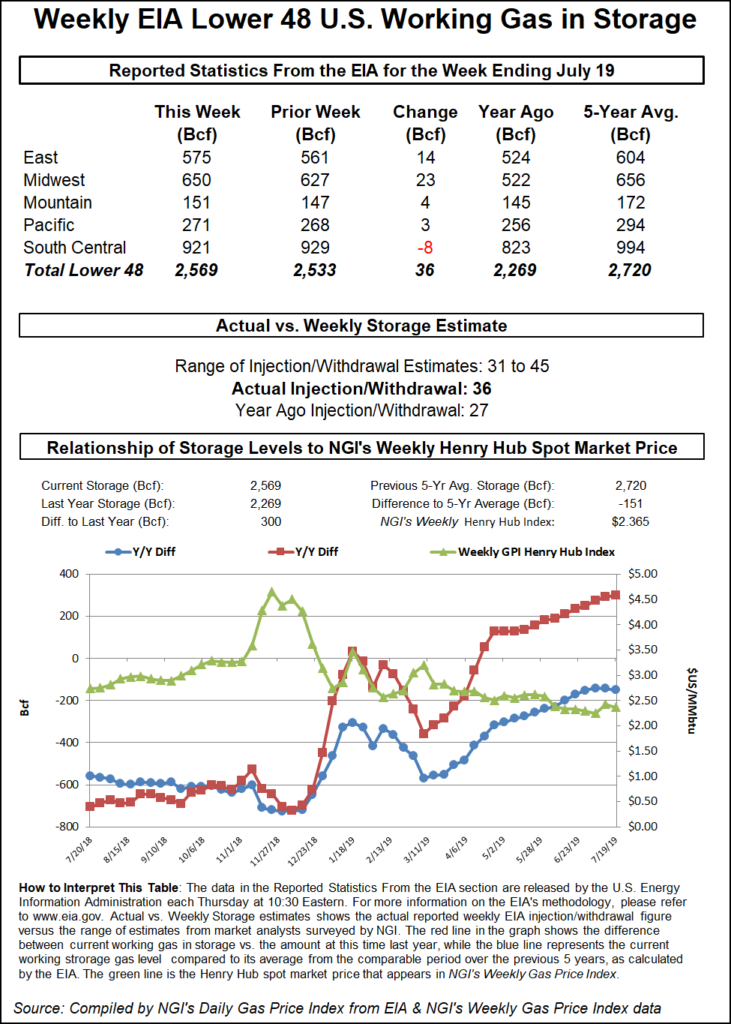 The relatively tight trading range coincided with daily fundamentals data that offered little in the way of new information to change the market’s outlook, according to Bespoke Weather Services.

“Production, after revisions, may wind up a little higher day/day, but still off the highs.” Liquefied natural gas (LNG) demand “remains off its highs as well, and burns showed little change” compared to Wednesday, “still running a little stronger than last week on a weather-adjusted basis” but lower in absolute terms given milder temperatures, Bespoke said. “Even the EIA number came in very close to consensus…failing to move the needle much at all.

“On the weather side, some cooler momentum continued in the 11-15 day forecast period…We still feel that the pattern can ultimately remain biased hotter than normal for the balance of the summer season, but not without some variability mixing in. The cooling in the 11-15 day may be real given some rise in global angular momentum, but this could well be another short window of cooling before things return back hotter.”

The EIA on Thursday reported an on-target 36 Bcf injection into U.S. natural gas stocks for the week ended July 19, versus a 27 Bcf injection recorded in the year-ago period and a five-year average 44 Bcf build. After a long string of above-normal builds earlier in the injection season, this week marks the second straight EIA report to come in below the five-year average.

Prior to Thursday’s report, estimates had been pointing to an injection in line with the actual figure. A Bloomberg survey had showed a median 37 Bcf, while Intercontinental Exchange futures had settled at 35 Bcf. NGI’s model predicted a 33 Bcf injection.

By region, the Midwest injected 23 Bcf on the week, while the East saw a net injection of 14 Bcf. Farther west, the Mountain region refilled 4 Bcf, while the Pacific on net grew its inventories by 3 Bcf. In the South Central, a 17 Bcf withdrawal from salt stocks was partially offset by a 9 Bcf injection into nonsalt, EIA data show.

A combination of higher LNG feed gas demand and stronger power burns has seen injections “begin to normalize” during the last two report weeks, according to analysts with Jefferies LLC.

“From the end of March until two weeks ago, 1.4 Tcf of gas was injected into storage, 45% above the five-year average of 0.9 Tcf,” the Jefferies analysts said. “…Lower prices are clearly impacting power burn, as July has averaged 40.4 Bcf/d, a new monthly record and up 1.1 Bcf/d year/year.” This year “has already seen 11 days of 40-plus Bcf/d power burn versus only nine in all of 2018. Power burn continues to exceed prior year levels despite” cooling degree days (CDD) coming in about 10% lower summer-to-date. “Even with this month’s hot weather, CDDs are still down around 2% year/year in July.”

Meanwhile, LNG feed gas demand has averaged 6.0 Bcf/d so far in July, about 0.4 Bcf/d higher than the record volumes in May 2019, according to Jefferies.

“Over the last two weeks, flows have picked up at Freeport (about 87 MMcf/d) and Elba Island (about 23 MMcf/d)…Corpus Christi flows have taken a step higher in July, averaging 1.2 Bcf/d (up 330 MMcf/d versus June), likely a sign that Train 2 is nearing service.”

Prices sold off across California and the Desert Southwest Thursday, though a number of points continued to trade at a premium to Henry Hub as heat was expected to blanket those regions through the end of the work week. SoCal Border Avg. fell 14.0 cents to $3.150, while El Paso S. Mainline/N. Baja dropped 16.0 cents to $3.205.

NatGasWeather called for “hot high pressure” to “rule the West” through Friday, delivering highs from the upper 80s into the 100s, with the hottest temperatures over the Southwest into West Texas.

“Waha cash prices had curiously strengthened by $1.20 from July 8-15, which we attributed to packing of the GCX line,” Genscape analysts Colette Breshears and Amir Rejvani said. “This idea has been validated by our aerial observations, infrared monitoring of compression and, ultimately, Kinder Morgan in their latest earnings call.

“We have conducted aerial flight analysis over the past several months that indicated pipeline construction was proceeding ahead of schedule,” the analysts said. “Recently, our proprietary infrared monitors at the Waha header system indicated several compression units had been activated. While this location is shared with three pipelines that export to Mexico, we saw no increases in flows to Mexico on these systems, suggesting compression was needed because the demand on free-flowing gas (either for the Mexico pipes or GCX) exceeded field pressures.”

The timing of the observed increase in consumption associated with packing the GCX line correlates with stronger pricing at the Waha hub relative to other locations in the region, according to Breshears and Rejvani.

The observed pricing dynamics suggest “a strength of demand specifically at Waha versus the larger Permian area, which supports heavy GCX linepacking activities between July 11-15, when Waha cash prices peaked,” they said.

Southbound flows on the Westcoast Energy system, which have been restricted due to repairs following an explosion last October near Prince George, British Columbia, could ramp back up by late August, earlier than expected, according to Genscape analyst Joseph Bernardi.

Flows have been restricted to current levels since July 14, in line with a maintenance outlook published earlier this year, according to the analyst.

“That same outlook showed flows remaining in the 850-1,000 MMcf/d range through the end of August, but the most recent calendar posted” Wednesday “shows expected flows at the end of August ramping up as high as 1,293 MMcf/d.”

Prices were mostly steady across the eastern two thirds of the Lower 48 Thursday, featuring a mix of small adjustments as much of the country enjoys mild temperatures this week.

“Light national demand will continue” through Friday “as cooler than normal conditions rule the Midwest and East, with highs again reaching the 70s and 80s,” NatGasWeather said. “It’s a little hotter over Texas and the South with upper 80s and lower 90s increasing in coverage. Demand will increase this weekend through early next week as high pressure strengthens across much of the country, with 90s returning across the central, southern and Mid-Atlantic, and upper 80s back to the Midwest and Northeast.”