Natural gas futures fell back below $4.00 on Thursday after the latest government storage figure came in on the higher side of expectations. With a cool front on the way and cash prices weaker, the September Nymex gas futures contract settled at $3.933, off 12.6 cents. October slid 12.3 cents to $3.948. 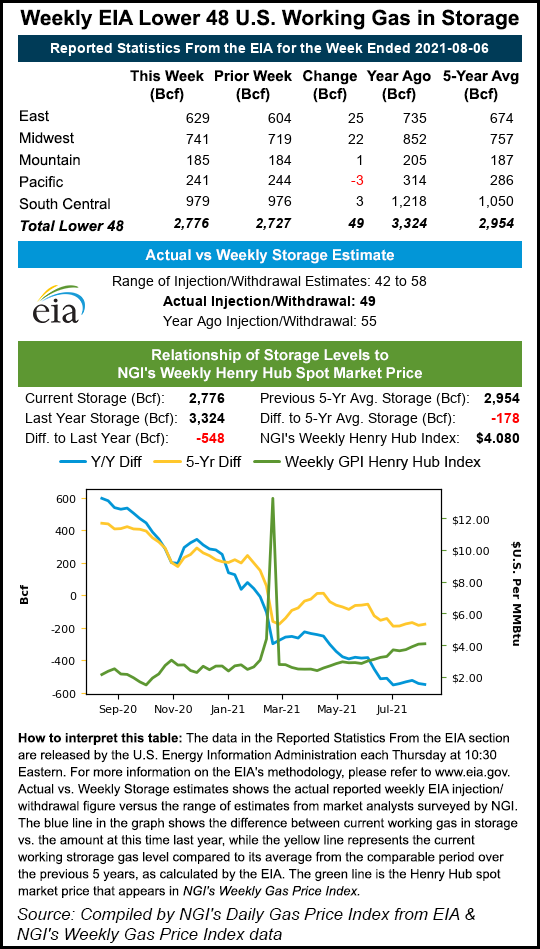 With few changes on the weather front, all attention was on the latest round of storage data. The Energy Information Administration (EIA) reported an on-target 49 Bcf injection into natural gas inventories for the week ending Aug. 6.

The 49 Bcf build was on par with major survey estimates ahead of the report and came in not too far removed from historical levels. Last year, EIA recorded a 55 Bcf build for the similar week, while the five-year average is an injection of 42 Bcf.

A Bloomberg survey ahead of the EIA report produced a range of injection estimates from 38 Bcf to 58 Bcf, with a median build of 47 Bcf. A Reuters poll had a tighter range, with the median estimate nailing the EIA figure. NGI modeled a 53 Bcf build.

Bespoke Weather Services said the storage figure was overall “very neutral.” There were no surprises in the regional data, either, with the injection continuing to reflect tightness in the market on a weather-adjusted basis.

NatGasWeather said it was cooler than normal over most of the United States during the reference period, except for in the West and along the Gulf Coast.

Total working gas in storage as of Aug. 6 stood at 2,776 Bcf, which is 548 Bcf below year-ago levels and 178 Bcf below the five-year average, according to EIA.

With little excitement in the storage data, attention was quickly moving to the next EIA report, according to Bespoke. Though this week is considered the hottest of the summer, the next storage build may not be the smallest. Higher wind and lower liquefied natural gas (LNG) exports “have loosened things considerably.”

The key, according to the firm, is how much the market again tightens once wind declines over the next few days. Some LNG volumes also are back in play. “For now, we stick with the thesis of an overall supportive backdrop, next week’s EIA number notwithstanding.”

Of course, there is the cooler weather to contend with. Forecasters see the lower temperatures lingering through the early part of next week, reducing demand in most regions aside from the West.

The National Weather Service (NWS) said the front’s slow movement would result in daily widespread showers and thunderstorms from the central Plains to the Northeast. The best chance for organized severe weather lies slightly ahead of the front, specifically for parts of the Midwest and the Northeast. Some severe storms could also develop in the Ohio Valley and Mid-Atlantic.

By Friday, the severe threat was expected to move into the country’s midsection while the Northeast and Mid-Atlantic remained in a favorable environment for severe storms, according to NWS. The Gulf Coast may expect scattered showers and thunderstorms for the next few days, with locally heavy rainfall totals.

The rains would likely limit widespread heat along the Gulf Coast, reducing the need for gas to produce electricity. Heightened power burns so far this summer have been a major contributor to the storage deficit in the South Central region.

Meanwhile, LNG volumes were rebounding from recent lows, with more room for growth ahead. On Thursday, NGI data showed feed gas deliveries to U.S. terminals jumping back above 10.3 Bcf.

Hot weather in Asia and lagging storage inventories in Europe have created a tug-of-war between the two regions for Lower 48 LNG cargoes. Higher prices have resulted, and though milder weather can be expected ahead of any cold winter temperatures, analysts see continued risk to the upside.

A BofA Global Research team, led by commodity & derivative strategist Francisco Blanch, said heading into the winter season, “the LNG market’s fuse has been lit.” Global utilization rates were running at the high end of the five-year average before turning lower this summer because of maintenance outages.

The price risks remain skewed to the upside, according to the BofA analysts. Given the current storage environment, any European supply disruptions, hiccups in the commissioning of Nord Stream 2 or a colder-than-normal winter could result in an asymmetric move higher for both Title Transfer Facility (TTF) and Japan-Korea Marker (JKM) prices. In addition, BofA analysts expect the Panama Canal to remain a bottleneck as Asia continues to call on Atlantic Basin supply.

“As a result, longer supply routes through the Suez Canal or around the Cape of Good Hope will be necessary and support even wider winter JKM-TTF spreads, a development that has already been unfolding in recent weeks despite record TTF prices,” Blanch said.

With Thursday likely the hottest day of the week, spot gas prices continued to soften ahead of a projected cooldown. Weather models have lost a considerable amount of demand since last week, as the hot upper ridge that’s led to the unusually oppressive weather weakens along with storms tracking into the United States, according to NatGasWeather.

The forecaster said in the near term, Tropical Storm Fred would likely bring rain, wind and cooling to Florida this weekend. It then is forecast to move to the southeastern Gulf Coast Monday and Tuesday. “Fred is expected to remain a relatively weak tropical cyclone but could delay LNG cargoes and weaken production slightly in the Gulf of Mexico.”

Temperatures may rise back slightly above normal by next Thursday, lifting daytime highs back to the upper 80s to near 90 degrees over the Midwest and East. The hotter conditions could last until Aug. 24, resulting in a “slightly bullish” sentiment for the period.

The largest price decreases were seen in California, even as heat indices in the state and across the Pacific Northwest were to range between 100 and 110 degrees. Some locations could reach as high as 115 degrees, according to NWS. The Pacific Northwest will also bake as high temperatures soar into the triple digits. Daily record highs may be broken Thursday and Friday, the forecaster said.

Losses also were seen on the East Coast despite the continuation of sweltering conditions there. Transco Zone 6 non-NY spot gas dropped 21.0 cents to $3.835. Upstream in Appalachia, Eastern Gas South was down 10.5 cents to $3.600.

Despite the steep losses, the region continued to struggle amid the current heatwave. New York City utility Consolidated Edison Inc. said it had responded to scattered outages since the onset of the hot weather, restoring service recently to about 2,300 customers. Less than three dozen of its 3.5 million customers were out of service early Thursday.

Elsewhere across the Lower 48, cash prices in the Permian Basin were slightly lower. Waha slipped 4.5 cents to $3.800. However, pipeline restrictions on Transwestern Pipeline were keeping spot prices at the hub well-supported. Transwestern next-day gas was down only a half-cent to $3.760.

The pipeline announced a force majeure Wednesday that was restricting up to 24 MMcf/d of receipts. The restrictions were put in place because of a mechanical failure at the Maljamar Compressor Station near Carlsbad, NM. The Frontier Maljamar Plant, a gas processing plant in Lea County, NM, was to be restricted to 49 MMcf/d through Monday (Aug. 16).

“Over the past 30 days, the Frontier Maljamar Plant has averaged 63 MMcf/d and maxed at 73 MMcf/d of receipts,” said Wood Mackenzie analyst Anthony Ferrara. “Since the force majeure was issued, flows have matched operating capacity, falling from around 74 MMcf/d on gas day Aug. 10.”

In Western Canada, spot gas bounced back across the region, with gains putting prices more in line with levels seen last week. Sub-C$1.00 pricing earlier in the week had been causing a stir, according to Tudor, Pickering, Holt & Co. (TPH). The firm noted that it was getting questions about whether the basin was once again seeing signs of the challenges experienced a few years ago.

Instead, TPH analysts said this week’s earlier price drop was because of maintenance on the Nova Gas Transmission Ltd. (NGTL) system. Available capacity in the USJR area dropped to 10.4 Bcf/d on Tuesday versus receipts as high as 10.6 Bcf/d this past weekend.

“Maintenance is expected to wrap up as early as this coming Sunday, which should ease basis briefly,” the analysts said. However, another maintenance event is poised to limit capacity to 10.6 Bcf/d from Sept. 7 to Oct. 4. Capacity is expected to increase to 11.7 Bcf/d from 11.2 Bcf/d prior to the maintenance during 4Q2021.

“Maintenance on the system is certainly nothing new,” said the TPH analysts. However, “we were reminded this week that the temporary service protocol on the NGTL system, which had prevented basis blowouts when maintenance kicks off since the agreement was settled, had lapsed ahead of anticipated capacity additions…” Those additions “have since been delayed beyond the summer timeframe.”

Beyond the near-term additions noted, a full 1.45 Bcf/d of incremental capacity is slated for in-service through 4Q2022, according to the TPH team. “So while we’d expect the present volatility to once again crop up in September, even the shift toward 11.7 Bcf/d in 4Q2021 is expected to keep this from being a structural concern.”NOVA/AECO C spot gas averaged Thursday at C$2.740, up $1.060 on the day.