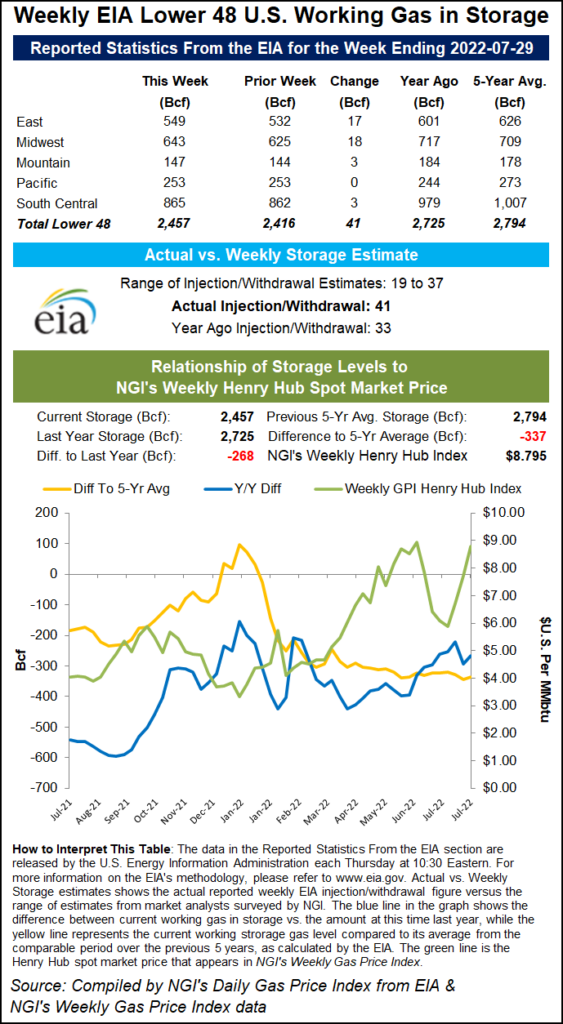 The EIA figure topped even the highest of estimates ahead of the report, and seemingly eased some concerns about supply, given the possibility of Freeport LNG’s return in October.

The Nymex September gas futures contract was down about 24 cents day/day at around $8.020/MMBtu in the minutes leading up to the inventory report. They quickly plunged to $7.880 as the EIA print crossed trading desks. By 11 a.m. ET, though, the prompt month was back at $8.112, off 15.4 cents from Wednesday’s close.

“After a few tight numbers, I see this one 1.5 Bcf/d loose versus last year,” said managing director Het Shah of The Desk’s online chat Enelyst. “Most of my miss was in the South Central salt. I was expecting salt to draw” but it “came in flat.”

South Central salt stocks ended the period unchanged at 195 Bcf, while nonsalts added 4 Bcf to lift stocks to 671 Bcf, according to EIA. Midwest inventories rose by 18 Bcf, while East stocks increased by 17 Bcf. Mountain storage levels were up 3 Bcf, and the Pacific region stayed flat on the week.

The 41 Bcf injection compares with the year-earlier injection of 16 Bcf. The five-year average for the week is a build of 35 Bcf, according to EIA.

Enelyst participants questioned whether production was higher than the 97 Bcf/d levels recently observed in the market. In particular, there were questions about whether Appalachia producers were ramping up amid the bursts of heat sweeping through the region. In addition, one of the trains at the Sabine Pass liquefied natural gas terminal was out of commission most of last week, which made more gas available for injection.