Natural gas futures collapsed further on Friday, settling at a level not seen in seven months as widespread warmth was seen continuing longer, limiting gas demand. The November Nymex natural gas futures contract closed out the week at $4.959/MMBtu, down 39.9 cents from Thursday’s close and off $1.494 from a week earlier (Oct. 14). 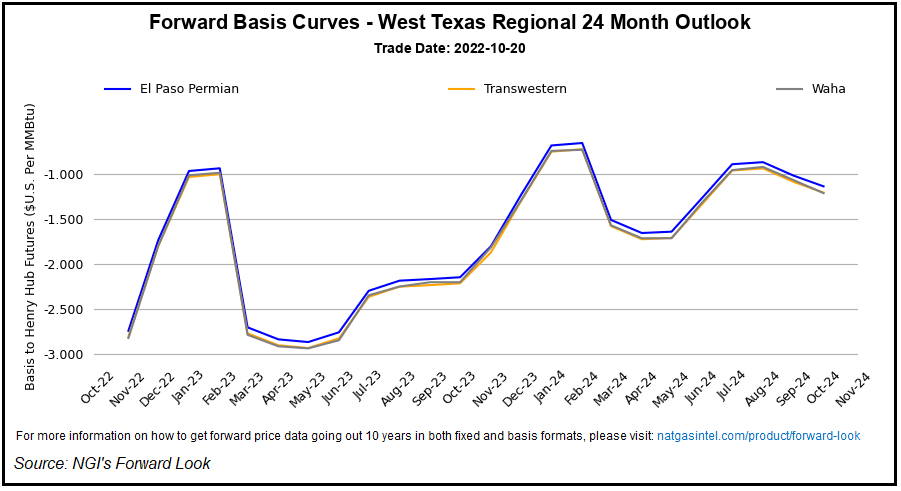 After some disagreement among major weather models that left open the possibility of cold weather returning soon, Friday’s dramatic sell-off along the Nymex strip instead reflected certainty that winter coats and hats could remain in the closet a bit longer.

“Amazing how quickly this unraveled, but such is life when both weather and fundamentals are about as bad as you’ll ever see,” Vortex Commodities CEO Brian Lovern told NGI.

After trending much warmer than the European model in recent days, the Global Forecast System (GFS) shed 15 heating degree days (HDD) overnight. This was on top of the 13 HDDs it lost midday Thursday, resulting in a nearly 30 HDD decline over the past 24 hours. Even more bearish for the market was that the European model – already warm to begin with – chopped another 10 HDDs in its latest model run.

Friday’s massive decline along the Nymex strip “is all about the European ensemble weather crash,” said a natural gas trader on energy chat Enelyst. “I don’t think November weather is that big a factor in overall winter.”

Nevertheless, with both the GFS and European data sets more than 50 HDDs warmer than normal for the next two weeks, “weather patterns are emphatically bearish,” NatGasWeather said. “However, the odds favor demand is added over the weekend since there’s not much room to lose more.”

Notably, the balmy outlook for the Lower 48 was similar to the near-term forecast for Europe, which could aid the continent in keeping stocks full longer as it prepares for a winter without Russian gas. Gas storage in the European Union was about 94% full as of Tuesday (Oct. 18).

Maxar’s Weather Desk (MWD) said unseasonably warm temperatures were forecast to build from western Europe eastward over the next week. The focus of warmth is from Germany into France early in the period, with above- to much-above normal temperatures expected to cover large swaths of continental Europe by day five. HDDs are projected to come in 12.9 below the 10-year normal and 15.1 below the 30-year normal, according to the forecaster.

Persistently warm above-normal temperatures were forecast for Europe through day 10 of the MWD outlook, while the 11- to 15-day forecast was for more of the same widespread balmy weather. MWD forecaster said the biggest change to the longer-range outlook is that there is greater coverage of much above-normal anomalies now expected.

“A strong influence from upper level ridging remains here,” according to MWD. “Historically, this yields a pattern that features above-normal temperatures over continental Europe and the South. Confidence is higher than average for the lead time with the ensemble models featuring good alignment.”

In the Lower 48, the longer that it takes for winter weather to return – and become more widespread – the more confident the gas market is expected to be that it can get through the season with no supply concerns.

The Energy Information Administration (EIA) has delivered a string of huge storage injections to the gas market that only two months ago contemplated having to price gas high enough in order to meet domestic demand this winter, rather than export it overseas. After soaring to about $10 in August, Nymex futures have more than halved amid a steadily improving supply outlook.

The latest EIA report showed a stout 111 Bcf injection for the week ending Oct. 14, lifting stocks to 3,342 Bcf, which is only 106 Bcf below year-ago levels and 183 Bcf below the five-year average.

As important, the 41 Bcf build in South Central stocks, including 18 Bcf into salt facilities, was a big contributor to the recent sell-off in futures, according to Mobius Risk Group. Adding to the downside risk is that warm weather forecasts suggest plump storage increases could continue well into November.

Weather aside, the return of Cove Point LNG following maintenance and the anticipated return of Freeport (pending regulatory approval from the federal regulators) in November should be supportive for demand trends. Based on recent liquefied natural gas export trends, feed gas deliveries to U.S. terminals could hit 15 Bcf/d once all Lower 48 facilities are back and running. At the same time, power generation remains supportive on the back of significant weakness in hydro generation, in particular.

Looking ahead to the next EIA report, the TPH team said its preliminary modeling pointed toward a build of 67 Bcf, which is in line with the five-year average build of 66 Bcf.

Not to be outdone by the futures strip, spot natural gas deliveries were put on the clearance rack Friday amid little in the way of heating or cooling demand, thanks to near-perfect autumn weather.

The lowest prices across the Lower 48 were in West Texas, where production growth in the Permian Basin has struggled to find a home amid the changing of the season and tight pipeline capacity.

Adding to the downside pressure on Friday was a notice from Kinder Morgan Inc. that it would be performing inspections and repairs at the Rankin, Devils River and Big Wells compressor stations along the Gulf Coast Express Pipeline (GCX). From Tuesday to Wednesday, GCX capacity is to be restricted to 1.325 Bcf/d and from Thursday to Friday, capacity is to fall further to 1,125 Bcf/d.

Double E pipeline also released a notice regarding this event, asking shippers to stay aware of any changes to contract demand during this maintenance. In the past, similar restrictions on GCX have had little-to-no impact on Double E deliveries. However, the net operational capacity during this event could be the lowest capacity compared to past events similar to this one.

“So, while the impact on Double E’s deliveries to GCX is unknown, this fact signals possible risks to these Double E volumes,” Wood Mackenzie analyst Quinn Schulz said.

For comparison, other locations across Texas averaged in the $3-4 range for gas delivery through Monday.

With late-season heat finally giving way to cooler weather on the West Coast, buyers took a hatchet to cash prices there. The SoCal Border Avg. plummeted $1.525 day/day to average $3.745, while El Paso S. Mainline/N. Baja dropped a steeper $2.250 to $3.455.

Price discounts of up to $1.00 or so were common throughout the country’s midsection and across the Southeast. On the East Coast, $1.00-plus losses were the norm as a warm-up that resembles September weather patterns.

“It will be quite a turnaround in parts of the Northeast as well considering that some locations received their first accumulating snow of the season earlier this week,” AccuWeather meteorologist Ryan Adamson said.

AccuWeather said temperatures north of 70 degrees in both New York City and Boston are expected by Wednesday. Seasonal averages for late October are near 60.

Meanwhile, Texas Eastern Transmission (Tetco) issued a force majeure Thursday citing an unplanned outage later this month on its Line 73 Valve Section (VS) 2 requiring a section of pipe to be isolated. Tetco is isolating VS2 locations between the Colerain and Salineville compressor stations in Jefferson and Columbiana, OH, from Oct. 28 to Nov. 13.

Nexus Gas Transmission subsequently declared a force majeure resulting from the VS2 isolation, which includes receipts onto the system via leased capacity on Tetco. Starting Gas Day Oct. 28, VS2 isolation would reduce operational capacity to zero through the Salineville compressor station except supply sourced from Nexus meter N4201, north of the isolation.