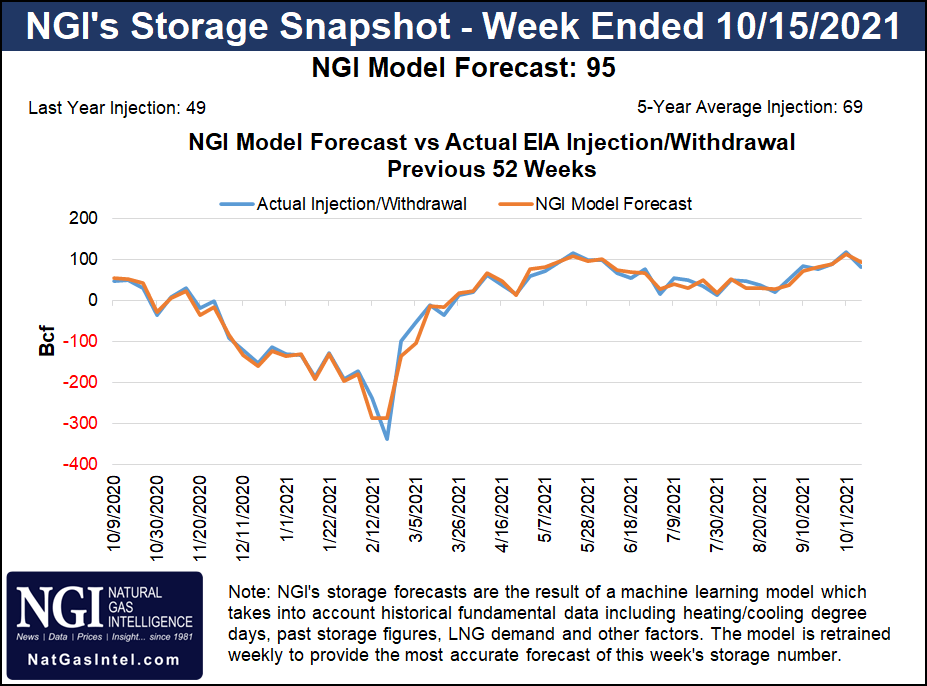 Though still weeks away from winter, even brief blasts of chilly air have been hard to come by. Weather models over the weekend flipped back and forth, but overall maintained a bearish outlook into early November. A brief cold front is forecast to sweep across the Great Lakes and Northeast this coming weekend, but temperatures are expected to warm again rather quickly.

“We suspected there was more risk to the downside versus upside, given a very weak weather pattern and ample storage,” said Bespoke Weather Services.

However, the magnitude of Monday’s price move was “a little surprising,” according to the firm, given that there was not a material weather change versus Friday. Furthermore, “we are still just in the middle third of October at this stage in the game.”

Mizuho Securities USA LLC’s Robert Yawger, director of Energy Futures, said this sets the stage for increased volatility in coming weeks. “At the least, Gazprom should have secured some extra gas to sell on the spot market, most likely at a big markup.”

Yawger noted the real issue is the Russian-built Nord Stream 2 natural gas pipeline that transports gas to Germany. The pipeline is already flowing, with volumes expected to increase as the system is commissioned.

However, significant regulatory hurdles remain for the embattled system. Chief among them is the need for compliance with European Union rules requiring ownership of transmission assets and natural gas supplies to be separate. The rule could prove to be complicated for Gazprom’s integrated structure.

“Russian President Putin has said that if the Europeans want more gas, all they have to do is approve the pipe,” Yawger said. “Until that happens, look for European gas prices to remain at sky high levels.”

Despite drama overseas, the bid in European gas prices did nothing to stop Nymex futures from tanking Monday, with selling accelerating after midday. The November contract plummeted to an intraday low of $4.962 before popping a bit to settle not far above that level.

Bespoke said it was still too soon to completely detach from the situation in Europe, but every warmer week in the United States brings the market closer to such a detachment. Lower 48 supplies are “simply not in peril as they are over there,” barring a massively cold winter with sustained cold.

“Absent that, there is only so much that the global issues can matter until we increase LNG export capacity,” Lovern said.

Furthermore, the longer warm weather sticks around, the better shape U.S. storage inventories are expected to be when cold air does arrive. Though wind generation has proven to be a key indicator of how much gas is injected into storage, the overall mild weather outlook bodes well for U.S. supplies.

Inventories as of Oct. 8 stood at 3,369 Bcf, which is still 501 Bcf below year-ago levels and 174 Bcf below the five-year average, according to Energy Information Administration (EIA).

Early estimates ahead of the next EIA report are pointing to a build in the 80-90 Bcf range. NGI projected a 95 Bcf increase in storage. This compares with last year’s 49 Bcf injection and the 69 Bcf five-year average.

“With our lean favoring a warmer November as of right now, we side with downside risks to prices ultimately, knowing there can be wild swings yet,” Bespoke said.

With little in the way of heating or cooling demand across most of the country, spot gas prices continued to retreat. There were a few exceptions, however, as some chilly weather persisted on the West Coast. Temperatures were forecast to be as much as 15 degrees below normal in much of California and Nevada, with the cooler weather spreading eastward beginning Tuesday.

The National Weather Service (NWS) said an area of low pressure associated with a potent upper level low is forecast to track from the northern Great Basin into the heart of the Intermountain West late Monday. The storm system was forecast to shift east into the Rockies by Tuesday and eventually reach the Great Plains. Lower elevations can expect rain showers, while mountain regions could receive up to two feet of snow through early Wednesday.

“There is no rest in the weather pattern out West as yet another storm system approaching from the Northeast Pacific ushers in more coastal/valley rain and mountain snow to the Pacific Northwest Tuesday night into Wednesday,” the NWS said.