Natural gas futures traded above $6.000/MMBtu to start the week as global supply concerns continued to infiltrate the U.S. gas market. With domestic gas demand at a seasonal low, however, early gains were pared and the November Nymex gas futures contract settled at $5.766, still up a significant 14.7 cents from Friday’s close. 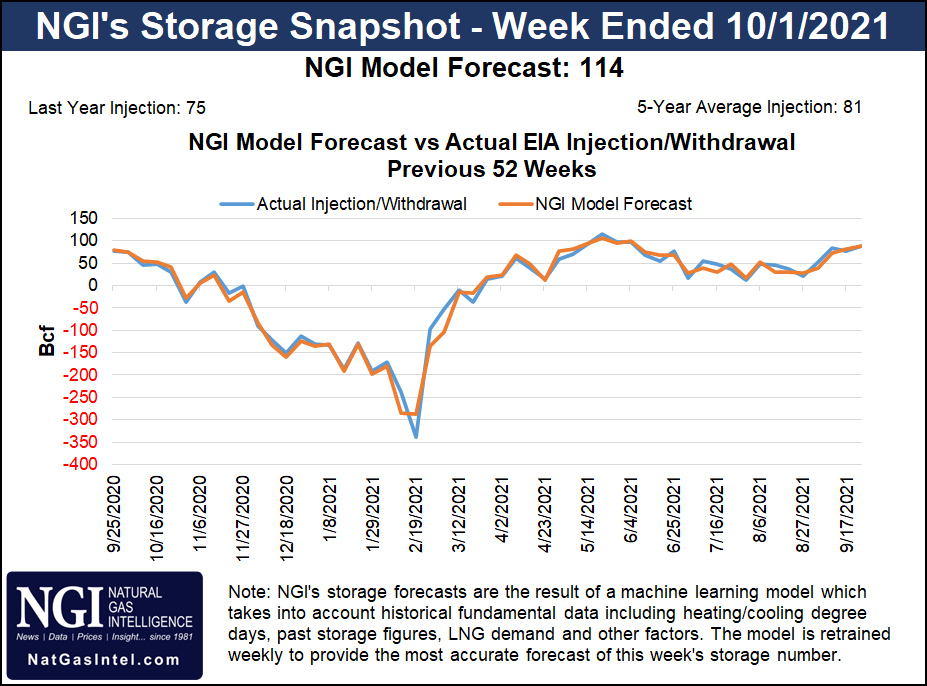 Fundamentally, the U.S. gas market is at its seasonal low point, with lingering heat and cooling demand offsetting any signs of early cold across the country. Bespoke Weather Services said the 15-day weather outlook is expected to remain “very bearish,” and could make a run at 2016’s record-low October gas-weighted degree day count.

Strong warmth is seen dominating the eastern half of the nation, and any early chill is in “no man’s land” in the interior West, according to the forecaster. Furthermore, it’s not out of the question for this warmth to persist into at least the first part of November, thanks to the La Niña state.

EBW Analytics Group said the projected storage trajectory through October has risen 150 Bcf over the past four weeks. Looking ahead, the firm’s analysts said warm late-September and October weather could lead to triple-digit reported injections over the next three storage reports. The next five injections could total a stunning 235 Bcf (6.7 Bcf/d) larger than year-ago builds.

NGI is projecting a build of 114 Bcf for the next Energy Information Administration report. That would compare with last year’s 75 Bcf injection and the 81 Bcf five-year average build.

“By late October, the natural gas storage deficit versus the five-year average could sink to just 125 Bcf,” EBW analysts said. “On the basis of near-term fundamentals in isolation, downward pressure and a retest of support close to $5.00/MMBtu appears likely.”

However, the EBW team cautioned that even a slight moderation from the forecast could rapidly add back space-heating demand. In addition, liquefied natural gas feed gas demand could step higher in as little as a week. Cove Point is returning from scheduled maintenance and Sabine Pass is ramping up the sixth production unit at the Gulf Coast facility.

U.S. gas prices have proven resilient in the face of an otherwise unsupportive backdrop. Though domestic supply fears have dissipated, concerns have intensified overseas.

Bloomberg reported that European inventories have reported a couple of days of withdrawals, weeks before first draws are typically seen. Forecasts, meanwhile, are showing the first cold snap moving into Germany by the end of the weekend.

Energy Aspects said both the U.S. and European markets are facing the same issues with nearly maximized gas-to-coal switching, low coal inventories and anticipated gas-to-liquids switching. The European market has at least had comparatively more fundamental drivers behind its bull run, but it also has no clear price anchor.

“That leaves Henry Hub exposed to an even higher degree of volatility than it otherwise would be in a winter when gas stocks have the risk of falling short,” Energy Aspects analysts said.

The firm’s gas team currently forecasts only one triple-digit injection this shoulder season. If not for its expectation of gas burn averaging slightly above 30 Bcf/d through the end of this week, there would likely have been two consecutive triple-digit builds.

“That 30-plus Bcf/d figure underscores the lack of movement from gas to coal in the power sector, despite $5.50-plus cash prices this week — a story we have repeated all summer,” Energy Aspects analysts said.

In a reflection of stubbornly strong power burns, spot gas prices jumped sharply higher on Monday despite a “very light demand” weather pattern across much of the country.

NatGasWeather said most of the country would see highs reach the 60s to 80s during the next couple of weeks. However, some cooler weather was expected in the Northwest and the far southern United States could see the continuation of heat.

Summer also is refusing to let up in the northern Plains. AccuWeather said daytime temperatures soared to 100 degrees last week, and more records are expected to be set this week. Temperatures are expected in the middle 80s near Billings, MT, on Tuesday, tying the Oct. 5 record of 85 degrees set in 1993. Elsewhere, temperatures in Bismarck, ND, are predicted to soar to near 90, which could tie the record last set in 1949.