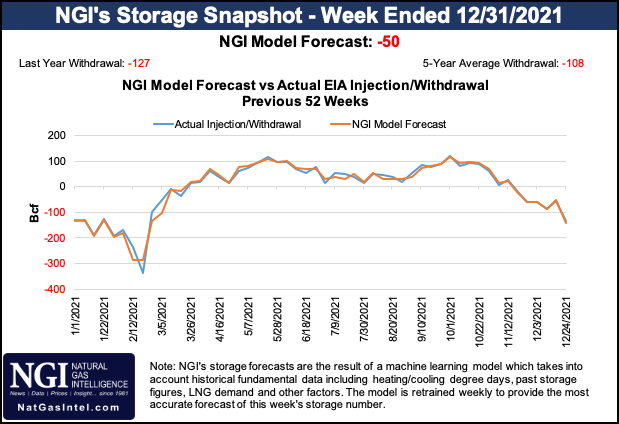 NatGasWeather said traders initially fixated on “huge” warmer trends in the January outlook that could diminish demand relative to expectations last week. The firm said both the domestic and European weather models over the weekend shed several heating degree days for the first half of the month.

Bespoke Weather Services issued a similar assessment Monday, noting the shift warmer was most pronounced early next week and is expected to continue for several days.

The back half of the two-week forecast is “where the weakness showed up most strongly in the recent model runs,” Bespoke said.

That noted, both forecasters said the outlook for January shows the coldest weather of the winter season to date, and heating demand is expected to prove strong throughout the northern half of the country.

NatGasWeather expects “the strongest demand so far this winter season early and late this week” as frigid weather systems sweep across the northern United States with subzero lows in several major Midwest markets, including Chicago, and frosty conditions in the East. Freezing temperatures are expected as far south as Texas.

With pipeline flows of gas from Russia lighter than previously expected amid political strife and regulatory approval delays for a new pipeline, Europe is low on natural gas as the continent moves into the depths of winter.

After a late-year pullback, benchmark European gas prices climbed Monday to levels that far exceed those for U.S. futures. The supply crunch and lofty prices in Europe make U.S. LNG attractive. Demand from Asia for American exports is also elevated.

At the same time, U.S. production kicked off 2022 notably lighter than it finished last year. Production on Monday stood at about 93.5 Bcf, according to Bloomberg’s estimate, down more than 2 Bcf from the prior week’s average. What’s more, output during the final week of December was lighter than 2021 highs around 97 Bcf reached during the fall.

EBW Analytics Group senior analyst Eli Rubin noted that, over the course of 2021, production gradually recovered from the pandemic-induced drops of the prior year. The Baker Hughes Co. rig count ended 2021 at a 20-month high, with natural gas-directed rigs up 28% on the year.

“In the near team, however, a seasonally falling frack spread count — down 40 frack crews (-15%) from Thanksgiving through New Year’s Eve — suggests a potential downturn in January production,” Rubin said.

NGI’s model called for a 50 Bcf pull for the week ended Dec. 31. Bespoke anticipates a 67 Bcf decrease in stocks.

For the year-earlier period, EIA recorded a 127 Bcf withdrawal, while the five-year average is a withdrawal of 108 Bcf.

Spot prices advanced along with an early week rash of chilly weather that spread across the East and delivered snow and freezing temperatures from Boston to Washington, D.C.

NatGasWeather said next-day gas demand could prove strong again Tuesday as freezing conditions in the Midwest drop into the southern United States. More of the same is likely later in the week.

“After a brief milder break across the southern and eastern U.S. Wednesday, another frigid cold shot will spread out of the Midwest and again across the southern and eastern U.S. Thursday-Friday for another round of strong national demand,” the firm added. “The West will be cool and unsettled early in the week, then warming and drying late in the week besides the wetter Northwest.”

When there are freezing conditions in Texas and neighboring states, production could decline, providing upward pricing pressure. Wood Mackenzie analyst Laura Munder said Monday that production had dropped over the weekend in part because of cold weather in stretches of the Permian Basin spanning both Texas and New Mexico. She noted that several producers had cautioned that output could prove uneven in coming days due to blasts of winter weather.