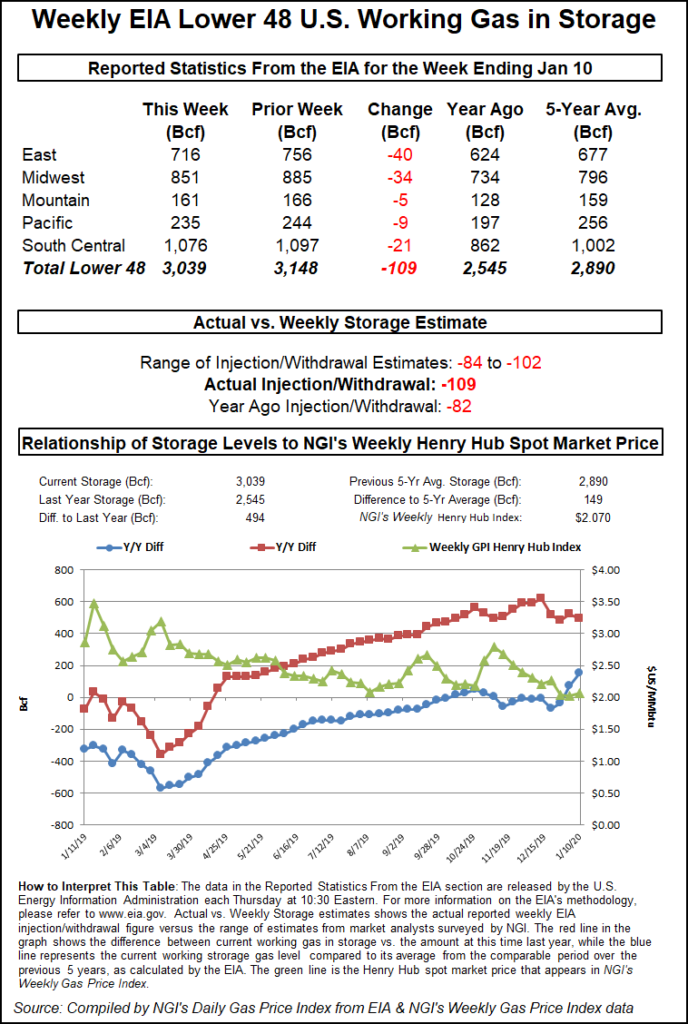 The 109 Bcf print, for the week ended Jan. 10, comes in lighter than the five-year average 184 Bcf but easily outpaces the 82 Bcf pull recorded in the year-ago period. Perhaps more important, the reported withdrawal beat consensus expectations by roughly 15 Bcf.

Shortly after 11 a.m. ET, February was trading at $2.149, up 2.9 cents from Wednesday’s settle and slightly above the pre-report trade.

Prior to the report, projections had been pointing to a withdrawal just shy of the triple-digit mark. Major surveys had landed on a pull around 93-95 Bcf, with responses ranging from minus 84 Bcf to minus 101 Bcf.

NGI’s model had deviated from that range, predicting a 106 Bcf withdrawal for the week, not far from the actual figure.

Market observers discussing the latest EIA data on Enelyst.com proposed higher power burns or lower production as among the possible explanations behind the high-side miss in this week’s withdrawal.

“Doesn’t make sense,” Shah said. “14 Bcf higher than market consensus. How does the market miss by 2 Bcf/d, and markets only respond with a 3-cent move higher?”

By region, EIA recorded a 40 Bcf withdrawal in the East and a 34 Bcf pull in the Midwest. The Pacific withdrew 9 Bcf on the week, while the Mountain withdrew 5 Bcf. In the South Central, an 18 Bcf pull from nonsalt and a 3 Bcf withdrawal from salt stocks resulted in a net 21 Bcf drawdown for the period, according to EIA.