The Energy Information Administration reported a 173 Bcf withdrawal in its weekly natural gas storage report Thursday, a bearish surprise that prompted a modest sell-off in the futures market. 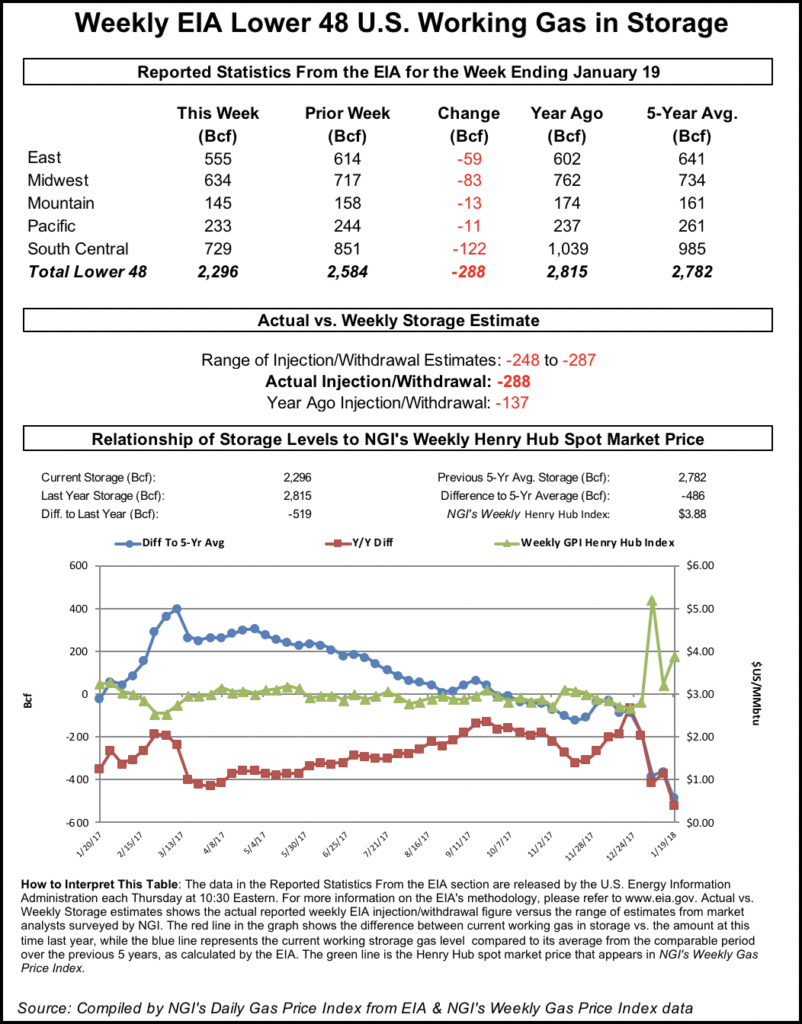 The 173 Bcf pull from U.S. gas stocks for the week ended Jan. 25 compares to a 126 Bcf draw recorded in the year-ago period and a five-year average draw of 150 Bcf. While larger than average, the actual figure comes in well below most estimates.

As the figure crossed trading screens at 10:30 a.m. ET, the March Nymex futures contract took an immediate hit, though not an especially pronounced one. After trading around $2.850-2.870 in the hour leading up to the report, the front month quickly sold off to as low as $2.811 before climbing back up to around $2.830-2.840 over the next few minutes.

By 11 a.m. ET, March was trading around $2.835, down a few pennies from the pre-report trade and down about 2.0 cents from Wednesday’s settle.

Prior to Thursday’s report, estimates had pointed to a withdrawal in the mid to high 180s Bcf range. As of Wednesday a Bloomberg survey had produced a median of 197 Bcf, while a Reuters survey pointed to a 189 Bcf pull. Intercontinental Exchange futures settled Wednesday at a 184 Bcf withdrawal.

Based on discussions over energy chat service Enelyst immediately following the report, the withdrawal in the East region came in lighter than market participants had expected. Meanwhile, some market watchers expressed skepticism over the number, with Genscape Inc. analyst Eric Fell suggesting it might be a true-up following a larger-than-expected pull reported last week.