A couple of minor surprises in the latest government storage report sparked a modest gain for natural gas futures ahead of the long Easter weekend. With a few brief cold snaps on the radar, the May contract finished Thursday’s session 3.1 cents higher day/day at $2.639. 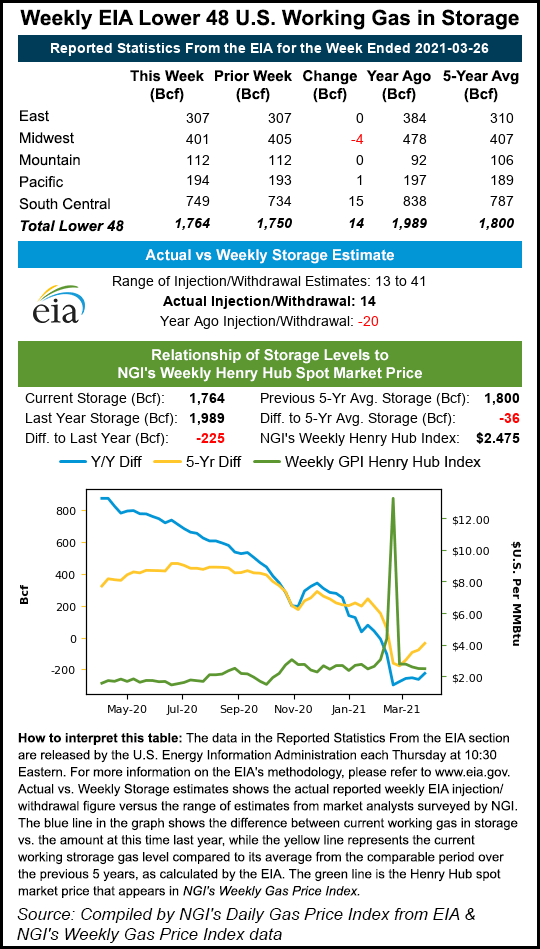 NatGasWeather said volatility was expected given the Energy Information Administration (EIA) storage report and players positioning for the three-day holiday weekend. That proved true as prices started off lower day/day, then rallied and continued to ping pong throughout much of the session.

[TUNE IN: What does NGI’s natural gas marketer ranking say about the industry? Listen to the most recent Hub & Flow podcast to find out.]

“To our view, as long as $2.58 holds on May, bulls are in control,” NatGasWeather said.

The latest storage data delivered a couple of surprises and fueled the volatility. The EIA reported a net 14 Bcf injection into natural gas storage for the week ending March 26, coming in slightly below market expectations and prematurely putting an end to the withdrawal season that traditionally runs through the end of March.

The EIA figure included a 4 Bcf revision for the week ending March 19 that resulted in a 32 Bcf withdrawal, rather than a 36 Bcf draw. The change occurred in the nonsalt facilities in the South Central region, where inventories reached 519 Bcf for the period.

In light of the EIA revision, Bespoke Weather Services said it rated the 14 Bcf injection as a “neutral number.” The firm had projected a 22 Bcf build.

Broken down by region, the South Central added a net 15 Bcf into storage, including 11 Bcf into salt facilities and 4 Bcf into nonsalts, according to EIA. Pacific stocks rose by 1 Bcf, while the East and Mountain regions each recorded no change. The Midwest continued to withdraw, pulling 4 Bcf out of inventories.

Total working gas in storage as of March 26 stood at 1,764 Bcf, which is 225 Bcf below year-ago levels and 36 Bcf below the five-year average, EIA said.

News of a steep day/day decline in production didn’t appear to rile traders.

Scheduling patterns typically cause overstated daily movements around the first of the month, according to Wood Mackenzie analyst Nicole McMurrer.

Meanwhile, the number of active rigs in the United States continued to climb, offering a glimpse into the production trajectory for later this year. The latest Baker Hughes Co. data showed the rig count up 13 from the prior week at 430. Oil-directed rigs climbed by 13 to 337, while gas rigs fell by 1 to 91 and other rigs rose by 1 to 2.

Nevertheless, Bespoke said the overall supply/demand balance data indicates that better power burns are needed to sustain any rally and avoid a trip back under the $2.60 level in the week ahead. The firm held sentiment at neutral, given an extra day for potential changes. “But gun-to-head, we’d suggest more risk to downside versus upside given the overall picture we see.”

A frosty late-season cold shot sweeping across the Midwest and Northeast over the next several days did little to boost demand for the holiday weekend.

NatGasWeather said heavy showers and thunderstorms over the East/Southeast were forecast ahead of the cold front, along with snow showers behind it over the Great Lakes and Northeast. However, high pressure was expected to build over the interior United States and expand across the East early in the week. This would result in widespread high temperatures ranging from the 60s to 80s for light demand.

“There will still be areas of showers over the western and southern United States” in the week ahead, “just to the mild side,” according to the forecaster. A seasonal pattern is expected April 10-15 as weather systems track across the country.

With the late-season chill arriving over a long holiday weekend and temperatures set to rise quickly afterward, spot gas prices fell hard in the Northeast.

In the Southeast, Transco Zone 5 cash fell 13.5 cents to $2.525, while Henry Hub slipped only 1.5 cents to $2.470.Prices across the Midwest also moved lower by the double digits, while losses were less steep in most of Texas. Houston Ship Channel prices for the three-day gas delivery dropped 6.0 cents to $2.390.