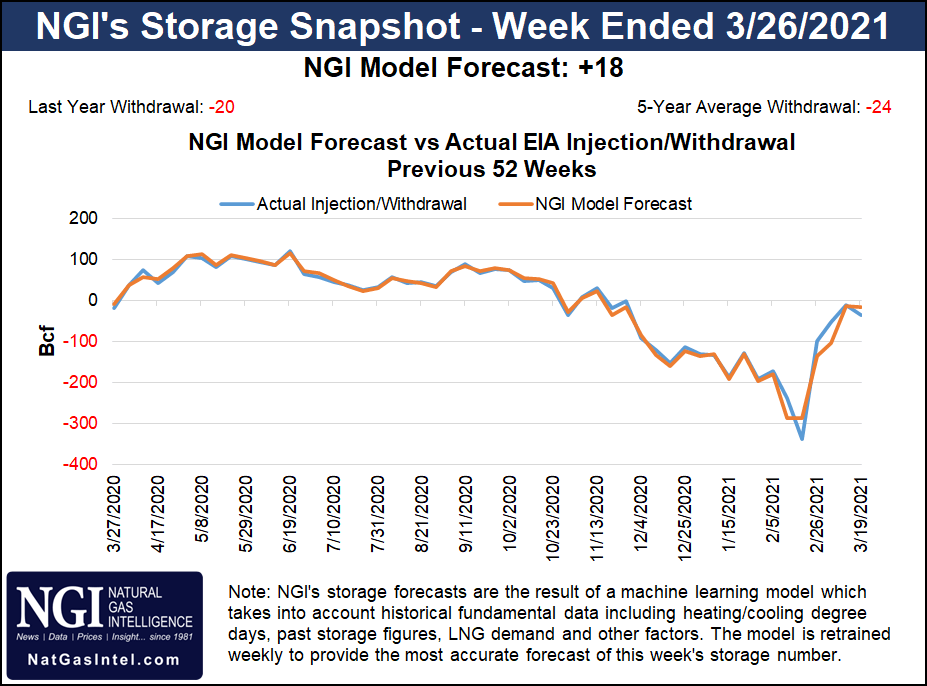 Domestic weather-driven demand, however, looked to waver between modest and weak in April.

While bouts of chilly rain were forecast to inject some regional demand at points this week and next, Bespoke Weather Services said the overall outlook was bearish for natural gas prices.

“All in all, we are left with a pattern that remains skewed to the warmer side of normal rather easily,” Bespoke said. “Our guess is that the general warmer state continues [into] the back half of April at this time.”

Power burns “remain quite weak in our weather-adjusted model,” the firm added, “which remains the biggest concern as far as being able to sustain any rally, especially with projected demand generally remaining quite low over the next few weeks.”

Bespoke noted that markets were looking ahead to this week’s U.S. Energy Information Administration (EIA) and anticipating both an injection and a potential end to winter season withdrawals. The forecaster’s preliminary estimate called for a 22 Bcf increase in stockpiles with the EIA print on Thursday.

The firm noted that last week’s storage report showed a withdrawal of 36 Bcf for the week ended March 19. The print was steeper than predictions for a pull in the low- to mid-20s, and it marked the first result on the bullish side of estimates found by major polls in a month. The decrease in stocks for the March 19 week lowered inventories to 1,746 Bcf, compared with the year-earlier level of 2,009 Bcf and the five-year average of 1,824 Bcf.

A result from EIA this week that confirms the supply/demand balance implied in last week’s report would be bullish, Bespoke said. However, “if we revert back to the prior few weeks, not so much.”

NGI’s model estimated an 18 Bcf injection for this week’s EIA report, which covers the week ended March 26. An injection would be bearish versus historical norms. EIA recorded a 20 Bcf withdrawal in the year-ago period, and the five-year average stands at a 24 Bcf pull.

Meanwhile, Egyptian officials said Monday crews had freed the massive container ship that blocked the Suez Canal for six days. The Suez Canal Authority said the ship would travel north and anchor in a lake, clearing the way for other ships to begin traversing the waterway and ending nearly a week of supply delays.

Several ships containing LNG were caught in the backlog created when the Ever Given got stuck last week. European natural gas prices and a range of commodity prices declined on Monday after news that the ship was freed.

Analysts said the delays had yet to notably impact U.S. gas prices, but had the ship remained grounded for another week, it could have created serious supply issues and affected prices. That noted, Rystad Energy analyst Louise Dickson said Monday it was unclear how quickly traffic would resume through the canal and unforeseen impacts could still materialize.

“Due to the large number of vessels that have accumulated, it could still be days or weeks until the canal is fully back to normal operations,” Dickson said. “The market will soon realize that despite the positive news…some leftover downstream ripple effects should be expected.”

Spot gas prices advanced on Monday as a storm system swept across the Northeast and Mid-Atlantic regions with showers.

National Weather Service forecasts showed chilly rains likely in the Northwest and the Plains Tuesday, with the system moving toward the Northeast on Wednesday. But high pressure was expected to drive comfortable temperatures across the central and southern United States by midweek, with highs ranging from the 60s to the 80s.

Citing DTN data, EBW Analytics Group said Monday “milder-than-normal” conditions were expected on the whole in the month ahead and could result in the third-warmest April of the past decade, with a projected 33 gas-weighted heating-degree days below the 10-year average.