The Energy Information Administration (EIA) reported an 18 Bcf injection into natural gas storage inventories for the week ending Aug. 12, about half of what the market had expected. 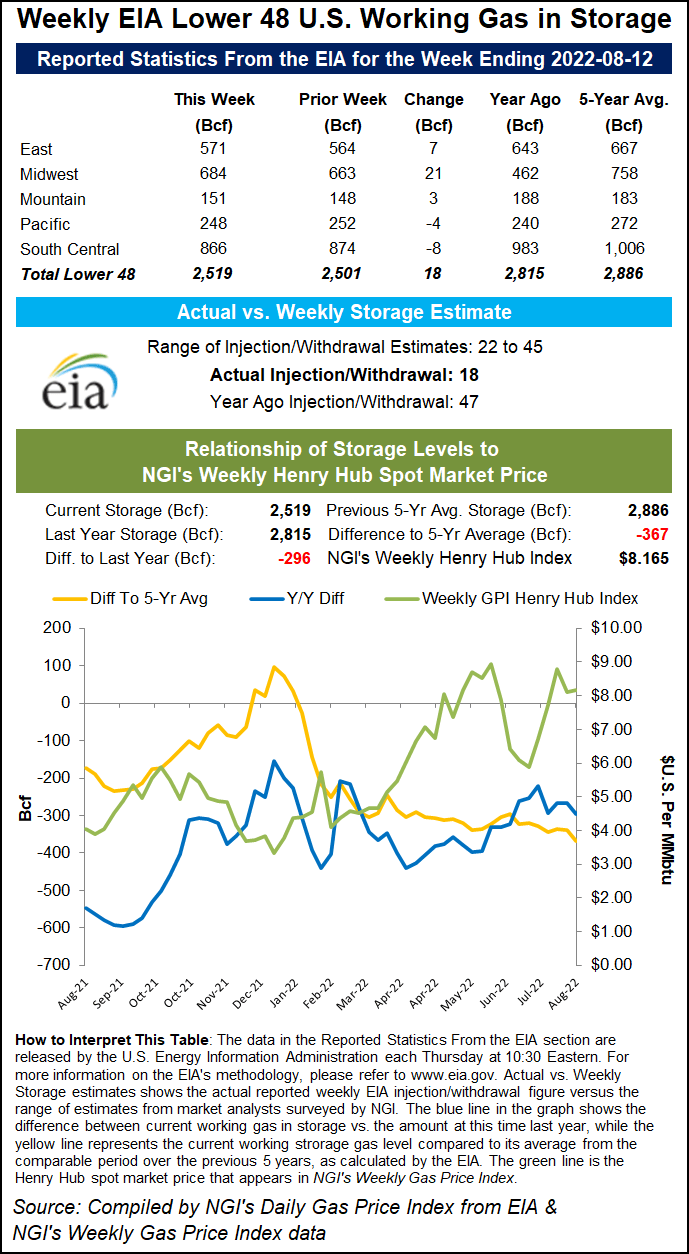 Natural gas futures already were higher on the day early Thursday, as traders appeared to expect a low-side injection. The September Nymex futures contract was trading at $9.323/MMBtu, up about 8 cents, in the minutes leading up to the EIA report. As the print crossed trading desks, the prompt month shot up to $9.428. By 11 a.m. ET, September gas was trading at $9.415, up 17.1 cents from Wednesday’s close.

“That was out of left field,” said Enelyst managing director Het Shah of the lower-than-expected storage injection.

Ahead of the EIA report, estimates centered around a build in the low- to mid-30s Bcf for the week ended Aug. 12.

EIA recorded a build of 46 Bcf during the same week a year ago, while the five-year average injection is 47 Bcf.

Participants on the Enelyst online platform attributed the miss to lower wind generation during the reference week. Shah said data showed wind generation averaging 32 GWh for the week, about 10 GWh below the prior week.

Other Enelyst participants pointed to struggling production, which has yet to sustain recent highs because of pipeline maintenance. School also resumed in parts of the Lower 48, which likely boosted demand.

Regardless of the reason, price action was swift. The September Nymex contract shot up to $9.663 within minutes of the EIA report, but then it ran into strong resistance.

“Prices still can’t hold over $9.50 for more than a few minutes, at least not yet,” said NatGasWeather’s Brian Lovern.

Broken down by region, the Midwest was the only region to record a double-digit increase in storage, rising by 21 Bcf, according to EIA. The East added 7 Bcf to storage, and the Mountain added 3 Bcf. Pacific stocks slipped by 4 Bcf, while the South Central dropped by 8 Bcf. The decline was solely in salt inventories. Nonsalts saw no change on the week.

Given the puny uplift to storage, some of the Enelyst participants lowered their expectations for the end of the injection season to around 3.3 Tcf, from 3.4 Tcf. That said, Lovern said the current week should be looser, “but not exactly ‘bearish.’”

While September gas prices are up $2 from the recent low at a wall of around $9.50, Lovern said, the market may “need some extra ammo, I suppose.”