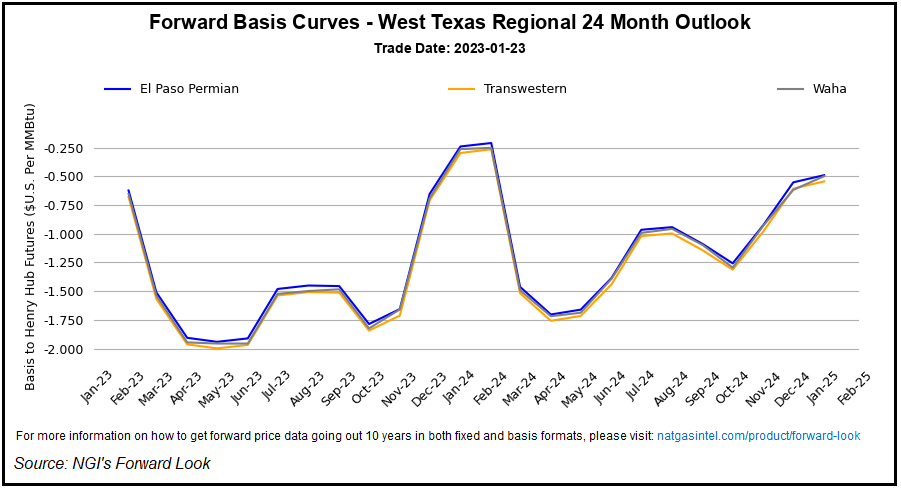 The outlook Tuesday from Maxar’s Weather Desk showed below-normal temperatures blanketing much of the Lower 48 in the six- to 10-day and 11- to 15-day periods.

For the 11- to 15-day window, models trended colder over the prior 24 hours, according to the forecaster. The pattern would deliver “belows into the South during the mid-period and much to strong belows in the Rockies, Plains, Midwest and at times in the East.”

Overall, the forecast showed, national heating demand would mount late this month and into early February, ending a trend of mostly benign weather so far in January.

Production on Tuesday also eased from around the century mark to near 98 Bcf/d, reflecting in part maintenance work in the Permian Basin, according to Wood Mackenzie.

In the near term, however, demand proved light, particularly in comparison to the snowstorm-laden December, and bearish sentiment weighed on markets as it has most of the new year.

“On the demand side, mild weather to kick off the year has seen domestic consumption tail off significantly since the winter storm in December 2022,” Rystad Energy analyst Ade Allen said Tuesday.

Meanwhile, one important potential demand stimulant is the anticipated return of the Freeport LNG export facility in Texas. Management of the liquefied natural gas plant said this week they had sought regulatory approval to begin the reopening process. Executives had previously said they hoped to relaunch by late January and quickly build up to 2 Bcf/d of capacity. Freeport would draw gas from domestic supplies and offset recently soft U.S. heating demand.

However, given prior regulatory delays, analysts remained dubious. “Uncertainty lingers,” Allen said. “We maintain our current forecast – a restart no earlier than March 2023. Signs of an earlier restart” would provide an “upside catalyst for prompt-month pricing.”

Noting the recent spate of benign weather, Allen joined a chorus of other analysts who also expect another weak storage print with Thursday’s Energy Information Administration (EIA) inventory report. Ample storage levels continue to weigh on prices, too, he said.

Early estimates for the week ended Jan. 20 submitted to Reuters found analysts looking for an average decrease of 78 Bcf. NGI predicted a pull of 81 Bcf. That compares with a withdrawal of 217 Bcf a year earlier and a five-year average decline of about 185 Bcf.

EIA printed a decrease of 82 Bcf for the week ended Jan. 13. The result compared meekly to the five-year average draw of 156 Bcf and the year-earlier pull of 203 Bcf. It lowered inventories to 2,820 Bcf but left stocks above the five-year average of 2,786 Bcf. It followed a rare January injection of 11 Bcf reported a week earlier.

Meanwhile, given the potential for cold blasts and production interruptions that often accompany freezing conditions, some analysts see near-term potential for recovery in the futures market. From a technical standpoint, given that front-month prices are nearly half of December’s highs, prices could be bottoming, according to ICAP Technical Analysis analyst Walter Zimmermann.

Cash prices varied by region, but strong gains in the West powered the national average higher.

In addition to cold air in parts of the West, National Weather Service (NWS) data showed stormy weather in the South, including possible heavy rains and tornadoes in Texas and snow in the Midcontinent on Tuesday. The conditions were expected to push to the East Wednesday and Thursday, though freezing temperatures were not expected in most areas.

Cold air in the Mountain West and northern Plains, however, was forecast to spread over the Great Lakes and the Northeast by the weekend, setting in motion a stretch of widespread winter weather and stronger national heating demand for late this month and early next, according to NWS.

In West Texas, meanwhile, warnings from regulators to brace for storms combined with maintenance work to curb production in the Permian Basin.