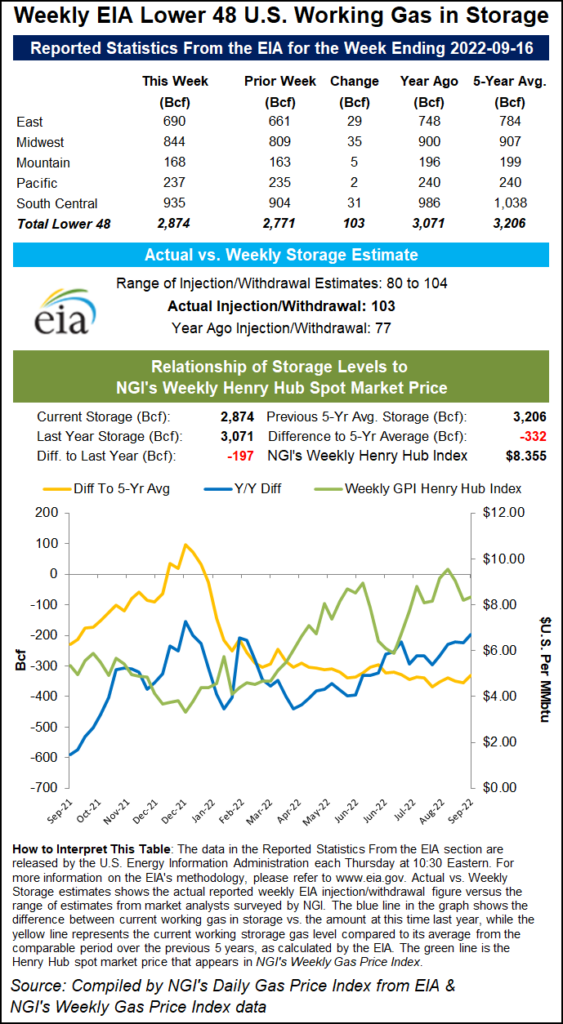 NGI’s Spot Gas National Avg. shed 45.5 cents to $6.385 as cooler weather arrived along with the official start of autumn on Thursday.

National Weather Service (NWS) data showed comfortable high temperatures ranging from the high 60s to the low 80s across large swaths of the Lower 48 on Thursday, from California to the Midwest to the Northeast. More of the same was forecast for the weekend.

At the same time, Bloomberg estimated production Thursday at 99.6 Bcf/d, just shy of the 2022 peak – and record high – above 100 Bcf/d reported earlier this month.

The shift to heating demand, meanwhile, may take several weeks.

“The longer-range weather pattern maintains the theme of a warmer-than-normal October into November due to upper high pressure holding strong over the northern half of the U.S. for only light heating demand,” meteorologist Rhett Milne of NatGasWeather said.

The latest U.S. Energy Information Administration (EIA) storage report, released Thursday, provided further evidence that supply and demand are beginning to align after a scorching summer that had created doubts about the adequacy of domestic supplies.

EIA reported an injection of 103 Bcf into natural gas storage for the week ended Sept. 16. The result exceeded analysts’ expectations and soothed market concerns about supplies for the coming winter.

The build marked the largest of the year. EIA reported a 102 Bcf injection for the week ended June 3. That was the only other triple-digit increase of the year so far.

The Midwest led all regions with a build of 35 Bcf, according to EIA. The South Central posted an increase of 31 Bcf. It included a 19 Bcf injection into nonsalt facilities and an increase of 12 Bcf into salts. The East region posted an injection of 29 Bcf. Mountain region stocks rose by 5 Bcf, while Pacific inventories increased by 2 Bcf.

Looking ahead, early estimates submitted to Reuters for the EIA print covering the week ending Sept. 23 ranged from injections of 65 Bcf to 98 Bcf, with a mean increase of 86 Bcf.

That compares with an injection of 86 Bcf during the comparable week in 2021 and a five-year average build of 77 Bcf.

While the storage situation improved, EIA said stocks remain well below the year-earlier level of 3,071 Bcf and the five-year average of 3,206 Bcf.

Analysts said ongoing robust injections are needed to narrow deficits to historic norms and ensure sufficient supplies in the event of a particularly cold winter.

Rystad Energy’s Emily McClain, vice president, said “the risk of extraordinary events,” from a hurricane damaging production facilities or a deep winter freeze propelling demand “are not off the table.” The potential for either could reignite “market nervousness as we head into the winter.”

What’s more, demand for U.S. LNG exports, already hovering at all-time highs, is expected to remain firmly intact through the winter as Asia and Europe stock up on gas after hot summers that depleted supplies on both continents.

Europe, in particular, finds itself increasingly dependent on U.S. liquefied natural gas because of Russia’s war in Ukraine. Amid the fallout of the conflict, Russia cut off the bulk of gas it had previously sent to Europe via pipeline. European countries are calling on residents to curb gas consumption this year as a result.

“With 15% demand rationing as targeted by the European Union, Europe will likely be able to survive the full disruption of Russian supply this winter if we see average winter temperatures,” said Krishna Sapkota, Enverus Intelligence Research senior associate. However, “our scenarios show that failure to ration gas supply sufficiently this winter would mean that European countries would exhaust stocks by February 2023 if winter temperatures are lower than usual.”

Given the global uncertainties, analysts at The Schork Report predicted a lumpy ride for natural gas prices this fall. “Volatility is here to stay in the gas market,” they said.

Cash prices on Thursday fell a second straight day and the third time this week as demand tapered and the NWS forecasts signaled weaker consumption through the weekend.

Hubs throughout the Lower 48 posted losses, with prices in the East leading the downward slide.

Meanwhile, a disturbance in the southeastern Caribbean, given a 70% chance of cyclone formation by the National Hurricane Center (NHC) Thursday, provided fresh fodder for market participants.

“The disturbance is forecast to move west-northwestward across the eastern Caribbean Sea” by Friday “and be over the central Caribbean Sea this weekend,” the NHC said.

Regarding potential impacts to U.S. energy interests, model runs suggest “a lot of spread on where the cyclone goes, as well as the intensity,” putting a range of scenarios in play, according to NatGasWeather.

“Potential impacts are difficult to predict, but the past several years have shown the net effect has been more bearish than bullish by slowing LNG exports and the loss of demand through cooler temperatures and power outages,” the firm said.

Extended downtime for a LNG terminal would present an “exceptionally bearish” scenario for U.S. prices, while lost production out of the Gulf region would put bullish pressure on the prices, according to NatGasWeather. In Texas on Thursday, El Paso Permian declined 64.5 cents to $4.595 and Katy lost 33.5 cents to $6.620.