Natural gas futures traders were content to leave positions intact Thursday despite another bullish storage stat and ongoing weather model volatility. The March Nymex gas futures contract settled at $1.862/MMBtu, up one-tenth of a cent from Wednesday’s close. April was unchanged at $1.887. 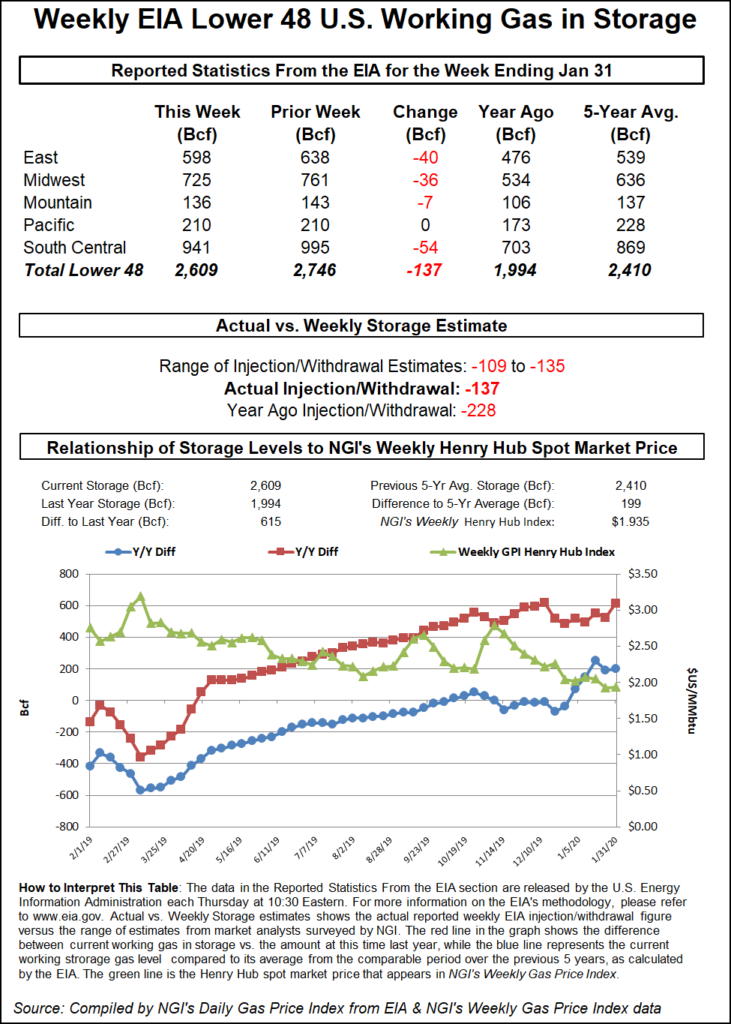 Spot gas prices were mixed as frigid air lingered across part of the country. Steep discounts were seen in West Texas, while the NGI Spot Gas National Avg. fell 4.0 cents to $1.760.

Futures trading has been rather choppy throughout the week, so the lack of movement was no surprise even when accounting for Thursday’s bullish government storage data.

The Energy Information Administration (EIA) reported a 137 Bcf withdrawal for the week ending Jan. 31, coming in well above estimates that clustered near a 130 Bcf pull.

March Nymex futures, which had been trading a couple of pennies lower day/day ahead of the report, quickly erased the losses but struggled to move much higher. The prompt month traded in a relatively tight band of around 7 cents before going on to settle on the lower end of the range.

Bespoke Weather Services said the 137 Bcf withdrawal “is another strong number,” among the tightest that it has seen when adjusting for weather.

However, this week’s EIA figure is still dwarfed by last year’s 228 Bcf withdrawal for the similar period, but it did come in just 6 Bcf below the five-year average withdrawal of 143 Bcf, according to EIA.

The South Central region led withdrawals, including a 38 Bcf pull from nonsalt facilities and a 16 Bcf draw from salts, which resulted in a net 54 Bcf draw, EIA said. The East pulled 40 Bcf out of storage, while the Midwest withdrew 36 Bcf.

“With this week’s data showing lower production, we should see another strong one next week, albeit lower in absolute terms given lower weather demand,” Bespoke chief meteorologist Brian Lovern said. “The pattern’s demand has been low enough to still outweigh the tighter balances. That, plus fears of liquefied natural gas shut-ins have kept pressure on prices.”

Indeed, traders have grown increasingly concerned that the global gas glut and low price environment would eventually lead to shut-ins of U.S. liquefied natural gas (LNG) exports. Now, fears over the coronavirus’ potential impacts on global demand have added to those worries.

Total SA’s Philippe Sauqet, who heads the Gas, Renewables and Power segment, said the company, after consulting with legal analysts, rejected one force majeure it received. He warned that if a longer-term situation arises in which LNG cargoes can’t be offloaded at Chinese terminals because of the virus, Total could reassess because then “there might be a real case for force majeure.”

Meanwhile, on the home front, traders struggle to make heads or tails of weather models. The generally more trusted European model has made major changes in each of its runs going back to overnight Tuesday.

After the Global Forecast System gained nearly 20 heating degree days (HDD) in the midday run, it was of considerable interest to see if the afternoon European model would also see a colder trend, especially after it lost a hefty amount of demand Wednesday night, according to NatGasWeather. The afternoon European model shifted colder through Feb. 15 but then milder for Feb. 16-18 by showing less impressive cold air into the northern United States.

“Overall, the latest European model gained 6 HDDs back of the 18 HDDs it lost last night,” NatGasWeather said. “There’s still a decent amount of chilly air across the Midwest and Northeast Feb. 14-20, although the southern half of the country will remain rather mild to counter.”

El Paso Permian cash prices rose as high as $1.520 on Wednesday as overnight temperatures in Lubbock, TX, plummeted to the mid-teens. But although lows are expected to remain below freezing through Monday, much milder daytime highs sent prices crashing back to earth Thursday.

Demand in other downstream markets also was expected to soften in the coming days. Southern California Gas demand reached a 48-day high on Tuesday and led to the utility importing LNG from Mexico’s Costa Azul terminal, according to Genscape Inc.

“Costa Azul sendout ramped up on Monday and reached as high as 350 MMcf/d Wednesday after having averaged just 43 MMcf/d in the prior 30 days,” Genscape senior natural gas analyst Rick Margolin said.

With temperatures in Los Angeles expected to climb to near 70 on Friday, the SoCal Border Avg. plunged 33.5 cents to $1.970.

Cash barely budged throughout the Midwest, while some modest movement was seen in the Midcontinent. OGT next-day gas fell 6.5 cents to $1.500.

Pricing hubs in Louisiana and the Southeast notched small gains on Thursday, as did markets in Appalachia. Tenn Zone 4 200L jumped a region-leading 9.5 cents to $1.735.