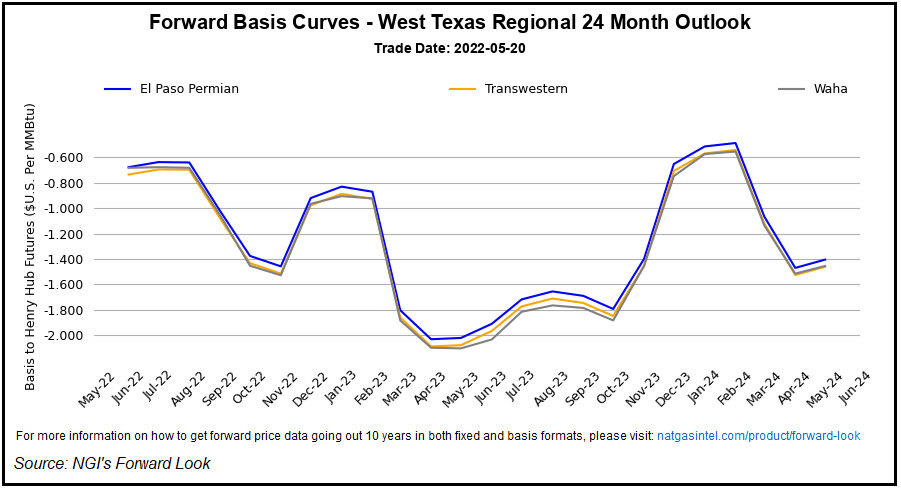 Throughout the spring, futures proved volatile, with wild swings even in intraday trading increasingly common. But each time the prompt month took notable steps lower, buyers have dived back in to buy the dips amid festering supply/demand imbalance worries. Monday’s trading amplified the trend.

Production ticked above 95 Bcf, according to Bloomberg’s Monday estimate, marking an increase of more than 1.5 Bcf from the previous week’s lows. Still, output remained below the roughly 97 Bcf that the market is searching for to ensure adequate supplies for summer as well as next winter.

At the same time, U.S. exports of liquefied natural gas (LNG) on Monday climbed further above 13 Bcf, after eclipsing that threshold last Friday.

Spring maintenance work at export facilities had in recent weeks curbed LNG feed gas volumes. With such work winding down, exporters are ramping back toward the record 14-plus Bcf level they had reached earlier in the year to meet robust European demand.

Europe is working to wean itself off Russian gas in opposition to the Kremlin’s war in Ukraine. At the same time, Russia has responded with aggression by cutting off gas deliveries to Finland, Poland and Bulgaria – moves widely viewed as preemptive threats to the broader European Union (EU).

“Russia continues to wield its energy weapon surgically with Finland the latest to feel the scalpel” last week, Rystad Energy analyst Lu Ming Pang said. As such, EU members are calling for U.S. LNG to help bridge the divide.

Domestic weather demand, meanwhile, eased some in forecasts Monday — but not enough to quell concerns about natural gas consumption outstripping supply in the event of a hot summer.

“We had expected to see stronger heat show up in that time frame, and still feel the pattern is poised to move hotter, but there are definitely delays in its arrival,” Bespoke said. “…In short, while we do expect the La Niña base state to send the pattern back hotter down the road, the next couple of weeks look best characterized as variable in all key regions of the nation.”

Still, Bespoke maintained a “slightly bullish lean” in light of strong fundamentals data in the form of modest production and long-range forecasts calling for intense heat in coming months. This creates a scenario in which utilities could struggle to simultaneously meet cooling needs while injecting gas into storage to ensure ample supplies for next winter.

The specter of lean inventories for the next heating season has undergirded market rallies throughout the spring.

Bespoke said its expectations for this week’s Energy Information Administration (EIA) storage report are for a print that would imply “wildly tight supply/demand balances.”

What’s more, “we currently show the next four numbers coming in under the five-year average build, something that is not sustainable without ultimately driving prices higher until we can price out some demand,” Bespoke added.

The firm said it estimated a storage build of 80 Bcf for the week ended May 20. That would compare with an injection of 109 Bcf during the same week last year and a five-year average injection of 97 bcf.

Utilities injected 89 Bcf of gas into storage for the week ended May 13, according to EIA. The result left inventories relatively lean.

The latest increase lifted stocks to 1,732 Bcf. At that level, however, storage levels were well below the year-earlier total of 2,090 Bcf and the five-year average of 2,042 Bcf.

Next-day cash prices advanced on Monday amid gains in southern markets and throughout the West.

The Southwest, in particular, continued to cook with temperatures in the upper 90s and triple-digit highs expected later this week. Prices reflected this. El Paso S. Mainline/N. Baja spiked 77.5 cents to average $8.260 and KRGT Del Pool jumped 51.5 cents to $8.315.

Elsewhere, comfortable high temperatures in the 60s and 70s permeated northern markets Monday. Such conditions were forecast to hang around through the trading week, from Minneapolis to Boston, National Weather Service (NWS) data showed.

At the same time, the extreme heat that baked southern markets through much of May was expected to recede. Highs in Houston this week, for example, were projected to hover in the mid- to upper-80s – down from the upper 90s earlier this month, according to NWS.

Weather could still create issues this week. Wood Mackenzie analyst Kara Ozgen noted on Monday that tropical activity in the Atlantic had begun early this year, with the first disturbance of the season swirling to start the trading week.

Ozgen estimated the disturbance had only a 10% chance of “turning into anything significant” that could derail natural gas production. Still, it was “causing disorganized thunderstorms spanning from the northern Gulf of Mexico to the Florida Panhandle,” and it reminded traders the coming hurricane season could interrupt output at a time when production needs to accelerate.

AccuWeather said the stormy weather would likely “usher in some cooler conditions” in Texas and neighboring areas. The forecaster also noted a chance of destructive winds in eastern New Mexico, the western half of Oklahoma, as well as West and Central Texas to the Mexico border.