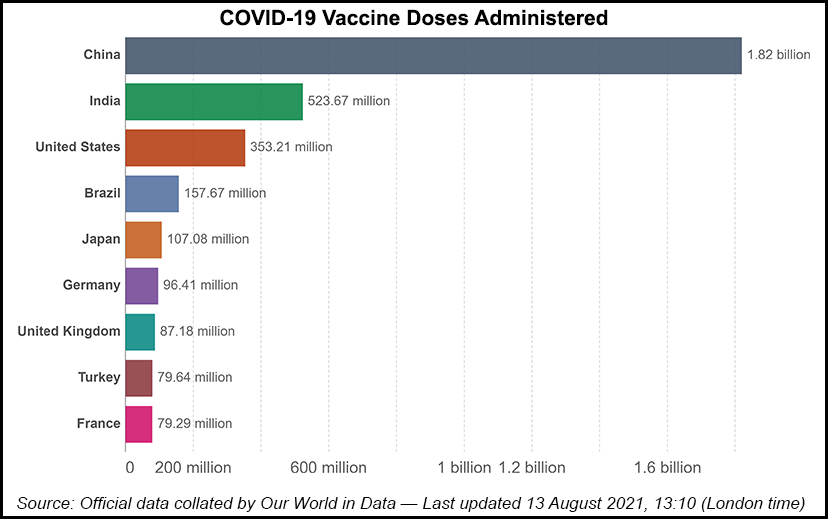 Spot gas prices also turned sharply lower as a series of storms was forecast to move in over the weekend, capping temperatures and lowering demand. NGI’s Spot Gas National Avg. tumbled 21.0 cents to $3.785.

With the core of summer in the rearview mirror, traders on Friday were focused on what appears to be some loosening in supply/demand balances. Although it was hot over the past week, wind generation was strong early in the period. Liquefied natural gas (LNG) demand also was lower for part of the week.

Bespoke Weather Services said this, along with the cooler near-term outlook, combined to put the pressure on the front of the futures curve. However, the firm noted that LNG feed gas demand was back up to around 11 Bcf on Friday, and winds also had died down. Meanwhile, production has not budged meaningfully since February.

“We do not see things as bearish here at all,” Bespoke said. However, the firm noted that downside momentum could lead the market to test support in the low $3.80s.

“It has been awhile since we had a meaningful pullback that was not simply technical consolidation, prior to right now,” Bespoke said. “Our models still point to under 3.5 Tcf for end-of-season storage levels, so risk of rallying back over $4.00, ultimately, is definitely there, near-term action notwithstanding.”

To be sure, while the upcoming cool front may leave more gas available for storage injections, inventories have a long way to go before they can be considered sufficient to meet winter demand. On Thursday, the Energy Information Administration (EIA) said stocks rose by 49 Bcf for the week ending Aug. 6, lifting inventories to 2,776 Bcf. This is 548 Bcf below year-ago levels and 178 Bcf below the five-year average.

Mobius Risk Group pointed out that there were 12 weeks remaining in the traditional injection season. A mild fall, and/or a sudden increase in tropical activity, would cause injections to quickly jump up above 75 Bcf and potentially creep up near the century mark. On the contrary, a hot September without such tropical activity would make the market increasingly uneasy about pre-winter inventory levels.

In the near term, Mobius said the South Central, Midwest and West are the regions to watch. The latest EIA data showed a notable expansion of the storage deficit in these regions. Interestingly, these regions are where most of the Lower 48 renewable generation resides.

Combined wind output from the Electric Reliability Council of Texas (ERCOT), Midwest Independent System Operator (MISO) and Southwest Power Pool (SPP) in the first week of August was a “lackluster” 21.4 GWh, according to Mobius. This was a decline of 6 GWh week/week and a modest 1.3 GWh higher than the same week last year.

The Aug. 9-13 period had warmed up substantially. At the same time, wind generation catapulted back up to 40-plus GWh. This presents an “interesting dynamic” for the market to consider ahead of the next EIA inventory report, according to Mobius.

“If the increase in wind generation is enough to offset the increase in temperatures, and the storage build is within 5 Bcf of Thursday’s result, the market may be on its heels for the next week,” it said. “However, it is always wise to remain cognizant that a warmer shift in weather forecasts would easily outweigh a looser EIA inventory report.”

Bespoke said the latest weather models maintained an above-normal demand outlook for the 15-day period, with gas-weighted degree days forecast to be 15-20 above the five-year average. The best heat was seen oscillating back and forth between the West and East.

In addition, Tropical Depression Fred was expected to be near the Florida Keys on Saturday and move near or west of the Florida’s West Coast through Sunday, according to the National Hurricane Center (NHC). The system could reach tropical storm status again over the weekend.

Another disturbance over the central tropical Atlantic also was expected to become a tropical storm by Saturday. The system was forecast by the NHC to approach the Leeward Islands on Saturday and be near Puerto Rico by Sunday night and Monday.

On a more macro level, there are growing concerns about the rate of infections of Covid-19. The Delta variant of the virus has spread quickly, and industry leaders are being mindful of the impact it could have on the economic recovery.

The International Energy Agency (IEA) on Thursday offered a warning about the potential loss of demand into 2022. Global oil consumption “abruptly reversed course in July, and the outlook for the remainder of 2021 has been downgraded due to the worsening progression of the pandemic and revisions to historical data,” IEA researchers said.

The agency in June had urged the Organization of the Petroleum Exporting Countries and its allies (OPEC-plus) to boost supply or risk a spike in prices. The Saudi-led cartel last month agreed to raise output by another 400,000 b/d monthly to unwind cuts made amid the pandemic in 2020.

The oil price rally during 2Q2021 “lost steam in July on fears that new Covid-19 Delta cases and weaker economic indicators could slow the oil demand recovery just as more supply hit the market,” according to IEA researchers. Demand for 2021 has been “appreciably downgraded.” Consumption is set to climb from pandemic-ridden 2020 by around 5.3 million b/d to average 96.2 million b/d. Demand should then increase by another 3.2 million b/d in 2022.

“The scale could tilt back to surplus in 2022 if OPEC-plus continues to undo its cuts and producers not taking part in the deal ramp up in response to higher prices,” the IEA researchers said.

Meanwhile, substantial concerns about rising Covid-19 cases in the Houston area have led Schlumberger Ltd. to withdraw from in-person attendance at the Offshore Technology Conference (OTC).

OTC 2021, considered one of the largest oil and gas gatherings in the world, was opening the doors on Sunday. Tens of thousands of people from around the world are planning to attend virtually or in person.

As Houston has become a pandemic hotspot, however, the Texas Medical Center warned that coronavirus cases were swamping the city’s intensive care units.

“As local hospitalization rates increase rapidly, Schlumberger has taken the decision to withdraw from the OTC 2021 event,” the company said Friday. “We would like to thank our partners at Texas Medical Center for their collaboration in guiding our understanding of the local Covid-19 situation, which prompted us to make this difficult decision.”

Spot gas prices tumbled across the Lower 48 as cooler weather started sweeping across regions scorched by heat over the past week.

AccuWeather said Portland, OR, hit 102 degrees on Wednesday, tying a record for the date last set in 1977. The high of 103 on Thursday fell one degree shy of tying the daily high record from the same year. Seattle high temperatures remained short of the century mark, but Thursday’s high temperature was only one degree away from the daily high record of 96.

Typical high temperatures for early to mid-August in the Northwest range from the upper 70s to low 80s for places such as Seattle and Portland to the mid-80s to low 90s for inland areas.

However, a shift in the weather pattern will help take heat out to the Plains, according to AccuWeather. This, combined with a dip in the jet stream, would open the door for noticeably cooler conditions early this week.

The cooler air would help bring temperatures closer to normal in the upper 70s to near 90 by Monday or Tuesday. Overnight low temperatures were also forecast to dip into the 50s, which is much more normal for mid-August, AccuWeather forecasters said.

The invasion of cooler air may also come with a brief opportunity for rain in portions of the region, according to AccuWeather. As the jet stream dips southward, some rain showers may reach portions of western Washington. While this area is in a drought, extreme and exceptional drought conditions remain farther east across the state, where rainfall is much less likely.

Nevertheless, the fading heat sent prices across the region spiraling lower on Friday. Malin spot gas fell 25.0 cents to $3.750 for gas delivery through Monday. In California, SoCal Citygate plunged $2.010 to $4.555.

Prices in the Midwest and Midcontinent were off no more than 15.0 cents day/day, while prices in East Texas fell as much as 23.5 cents.

Northeast pricing hubs posted losses similar to those seen on the West Coast as severe storms were forecast to slam the region, dropping temperatures and demand alike. After major cities in the region saw temperatures soar close to 100 degrees in recent days, cooler, less humid air is expected to arrive over the weekend.

The greatest risk of severe thunderstorms with high winds and gusts up to 75 mph are forecast to extend from northern Arkansas to Vermont, western Massachusetts, western Connecticut and the New York City area, according to AccuWeather. A complicating factor in the coming days is the moisture from Fred, which is forecast to roll across the Southeast with heavy rainfall.

“The proximity of the front and tropical moisture could unleash excessive rainfall and raise the risk of flooding across the southern Appalachians, the central Appalachians and possibly areas closer to the Atlantic Coast” as the week progresses, AccuWeather said.