Natural gas futures gave up ground Friday as buyers moved to the sidelines after a furious rally earlier in the week. The June Nymex gas futures contract declined 22.5 cents day/day and settled at $8.083/MMBtu. Still, it gained 5.5% for the week. July shed 22.2 cents on Friday to $8.178. 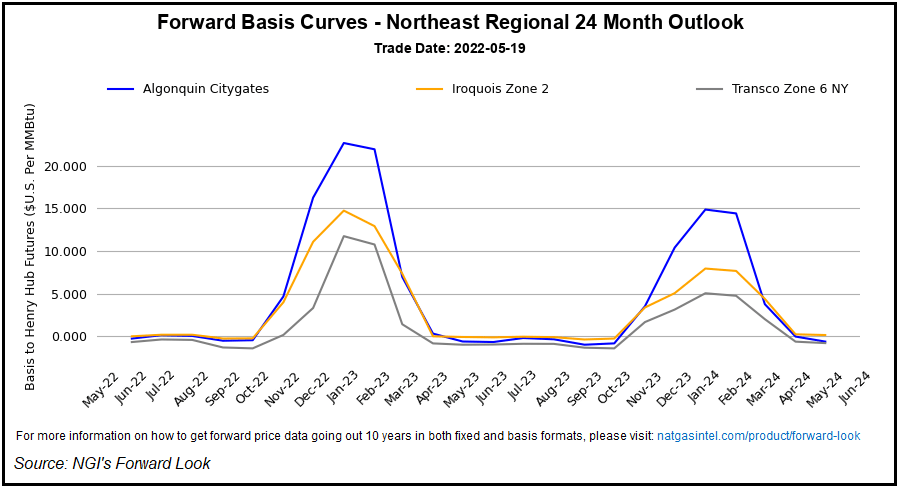 Small shifts in fundamentals appeared to give traders reason to hit the pause button after futures had soared above $8.50 at one point in the week.

Production estimates on Friday crept back up about 1 Bcf from earlier in the week to 95 Bcf, though output remained well below the 97 Bcf level reached in the midst of the past winter. Analysts widely agree production needs to climb back to that level to meet summer demand and inject gas into storage for next winter.

Weather forecasts Friday trended slightly cooler day/day, with changes focused on the week ahead. Still, “all models remain adamant about the return of stronger heat as we end the month and head into the start of June,” Bespoke Weather Services said.

U.S. exports have helped Europe fortify supplies this spring as countries across the continent look to scale back their reliance on Russian gas and brace for the possibility of the Kremlin cutting off flows. Europe is trying to wean itself from Russia’s energy in opposition to the war in Ukraine.

The continent, however, is trying to strike a delicate balance. It needs time to build up supplies – and long-term sources of gas – before severing Russian ties. The Kremlin, however, has begun to retaliate by cutting off flows of gas to certain countries.

Most recently, Finnish importer Gasum Oy said it received notice that Russia planned to shut off supplies to Finland on Saturday (May 21). The European country dismissed Russia’s demands to pay for its gas in rubles, resulting in the Kremlin retribution. This came on the heels of similar Russian actions against Poland and Bulgaria.

The actions impose greater uncertainty in Europe and reinforce the likelihood of demand for U.S. LNG holding strong through the summer.

Domestically, the combination of modest production and strong demand imposed uncertainty about American supplies as well.

On Thursday, the Energy Information Administration (EIA) reported an 89 Bcf injection into U.S. natural gas stocks for the week ended May 13. The print was in line with expectations and the five-year average.

However, supplies are struggling to keep pace with historic standards. Total Lower 48 working gas in storage ended the most recent EIA period at 1,732 Bcf, 15% below the five-year average.

In mid-May, the TPH analysts said, demand for power generation has been tracking about 4-6 Bcf/d above norms. Extreme heat in Texas and neighboring states fueled this demand.

TPH’s preliminary modeling as of Friday was pointing to a 90 Bcf injection for next week’s EIA report, tighter than the five-year average build of 97 Bcf.

Analysts have said that triple-digit injections are needed soon to ensure ample supplies later this year.

NatGasWeather said near-term weather patterns supported natural gas demand in the physical markets, but prices had climbed too high, too fast early in the week to sustain. Spot prices had surged 80 cents Monday through Wednesday, and the national average gave back some of those gains over the final two sessions of the week.

Still, temperatures in Texas and surrounding states were hot Friday and expected to remain so through the weekend, with highs of 90s to lower 100s for “strong early season cooling demand,” NatGasWeather said. What’s more, the expected weekend expansion of that heat to the East Coast fueled demand in major population centers, from New York City to Philadelphia.

Moving into the week ahead, however, milder conditions in northern markets may provide some offset, NatGasWeather added.

“Upstream over the Mountain West and Midwest, a cooler than normal weather system is sweeping through with showers and cool highs of 40s to 70s,” the forecaster said. It also noted that the eastern heat is projected to taper substantially early in the coming trading week.

Farther out, though, heat is expected to dominate southern and eastern swaths of the Lower 48 late in May and at the start of June, with highs ranging from the upper 80s to the 100s, NatGasWeather said.