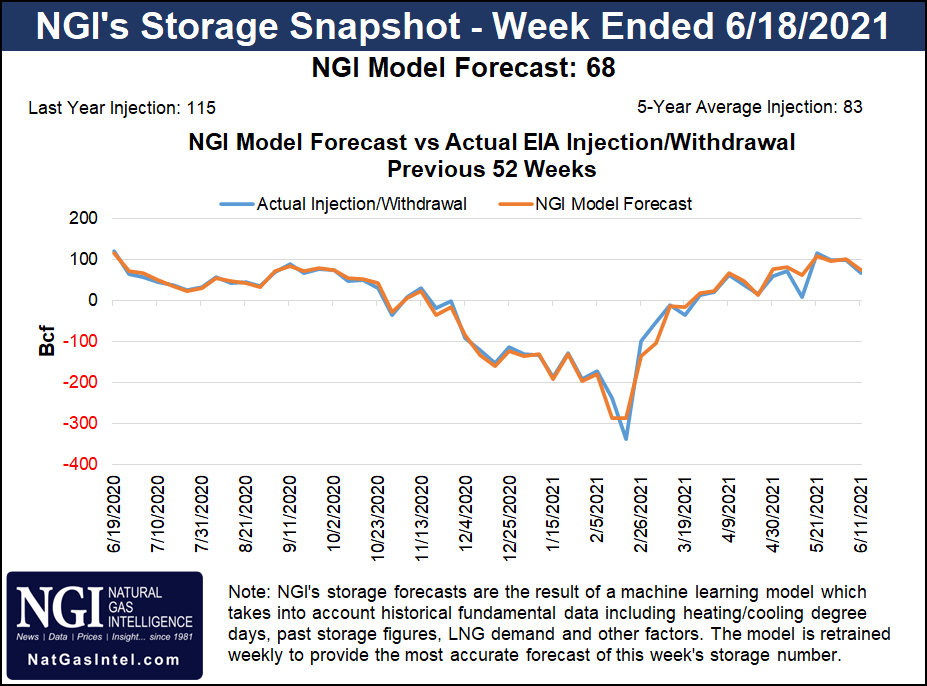 Spot gas prices were mostly lower too, with strong demand mainly on the West Coast and heat dissipating in the East. NGI’s Spot Gas National Avg. ultimately lost a half-cent to reach $3.075.

With the core of the summer quickly approaching, prices along the Nymex futures curve have gained momentum with every hotter turn of weather models. However, the 15-day outlook started to cool a bit at the end of last week. On Monday the outlook continued to back off the amount of projected demand expected for the end of June/early July period.

Bespoke Weather Services said the best heat in the pattern remains in the western half of the country, with models not showing as much risk for the return of eastern heat as they were hinting at last week. Given the lack of eastern ridging in current projections, the risk, according to the firm, is that total gas-weighted degree days may be forecast a little too high into early July and could wind up closer to normal.

“We still suspect July as a whole winds up a little on the hotter side or normal at this time, however,” said Bespoke. “It is hurricane season, so eyes will be on the tropics as well.”

Tropical Storm Claudette, the first named storm of the 2021 Atlantic hurricane season, made landfall in southeastern Louisiana over the weekend. The storm moved across North Carolina early Monday before heading offshore.

Wood Mackenzie said Gulf of Mexico production fell from 1.9 Bcf/d to 1.7 Bcf/d for last Thursday and Friday (June 17-18), but bounced back to around 1.8 Bcf/d by Monday.

Although the storm no longer poses a threat to offshore operations, Bespoke noted that the Global Forecast System indicated that another possible Gulf system could develop in eight to 10 days, “though confidence is low at this lead time.”

“Growing forward spreads between Nymex and international gas pricing highlight the likelihood that LNG feed gas demand will begin to rebound as soon as this week, tightening Gulf Coast supply/demand fundamentals,” EBW said. “As we move further into the summer, though, LNG feed gas flows are likely to ramp up by 2 Bcf/d and weather in the eastern half of the country is likely to be substantially hotter than forecast this week. As this occurs, gas prices are likely to rise significantly.”

Though not at the near-record levels seen earlier this spring, NGI data indicated that LNG feed gas demand has staged somewhat of a recovery. After languishing below 10 Bcf through last week, flows to U.S. LNG export terminals bounced back over the weekend and sat at around 10.3 Bcf on Monday.

However, supply also was ramping up. Bespoke and NatGasWeather noted that production had climbed to around 92.5 Bcf on Monday.

With traders closely monitoring weather data, NatGasWeather said trading is likely to be volatile this week as the markets ready for the core heat months of July and August. A hotter-than-normal pattern is expected. However, the question remains how much hotter than normal it will be and whether the heat results in storage deficits increasing slowly or at a faster pace, according to the forecaster.

The Energy Information Administration (EIA) stunned the market last week by reclassifying 51 Bcf to base gas in the Pacific region. The reassignment effectively removed the 51 Bcf from available inventory and flipped the region’s stocks to a 13% deficit, from a 4% surplus. Total working gas in storage as of June 11 stood at 2,427 Bcf, which is 453 Bcf lower than year-ago levels and 126 Bcf below the five-year average, according to EIA.

Market expectations for this week’s EIA report are for a build between 58 Bcf and 75 Bcf, which is slightly less than the five-year average of 83 Bcf. Bespoke said this week’s figure would likely reflect a very tight supply/demand balance, but this is known to the market, “or should be at this point.”

This is because of low wind and nuclear output last week, along with hot weather in Texas, all factors Bespoke said are at least somewhat reversing this week. Thursday’s report is likely going to be a “one-off” in terms of how tight it will look.

NatGasWeather added that “the battle lines are clear for this week. Will July and August bulls take out $3.30, or will bears reclaim $3.20?”

Though West Coast temperatures are expected to slide closer to normal by next week, the potential for record-breaking heat on Monday kept prices in the region on the upswing.

NatGasWeather said hot upper high pressure was set to continue over the West with highs of upper 80s to 110s through Saturday. The hottest weather was expected to be in California and the Southwest.

EBW said concern is continuing to mount regarding the potential for severe drought conditions in the region to drastically reduce hydropower generation this summer. Analysts noted that in California, officials expect eight large hydroelectric facilities to produce only 30% of their 10-year average generation.

“The concern, however, is not just limited to California,” EBW said.

Output from the Hoover Dam in Nevada, one of largest hydroelectric facilities in the country, has 2,074 MW of capacity that serves Arizona, California and Nevada. However, output is already down 25% from its peak and should drop further, according to EBW. Hydropower in the Pacific Northwest is also below normal levels.

“Continued drought could pose a serious threat to reliability, especially if the extreme heat of the past few weeks is repeated later in the summer, potentially resulting in frequent black-outs and causing a major increase in power sector consumption of natural gas,” EBW said.