Natural gas futures rallied over the first two days of the week but gave up that ground Wednesday as expectations for a stout storage build overlapped with the demand uncertainty inflicted by Hurricane Sally after it moved into the Gulf of Mexico (GOM) and made landfall. 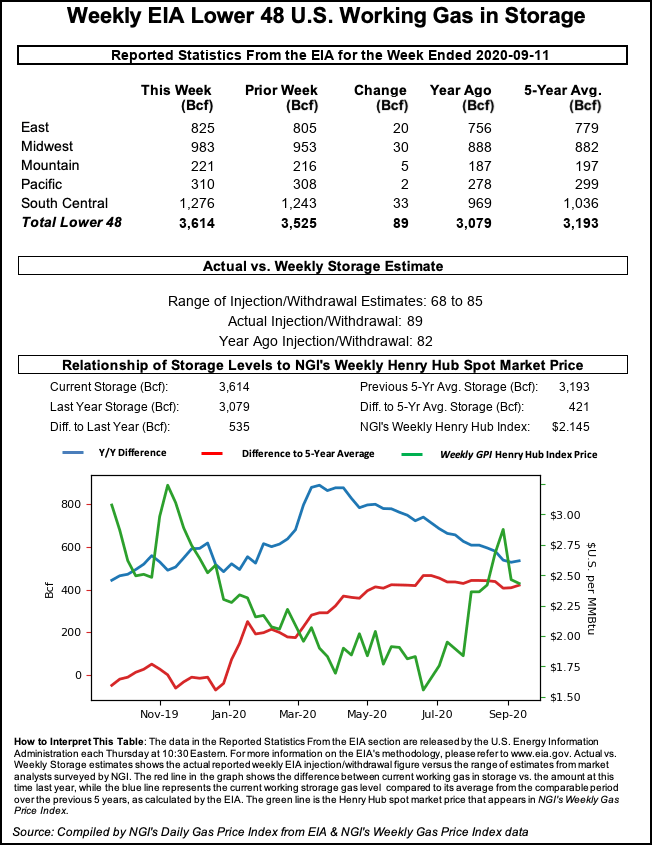 Sally made landfall on Alabama’s coast as a Category 2 hurricane early Wednesday, then tracked along the border with Florida and delivered strong winds and massive flooding. The hurricane was downgraded to a Category 1 as it moved ashore. But weather services reported that, because it was moving slowly at only a few miles per hour, steady downpours were drenching coastal communities.

Hundreds of thousands of households lost power overnight Tuesday and into Wednesday, and social media posts by residents in affected areas featured photos and videos of downed trees, destroyed homes and boats, and cars swept up in streets turned to rivers.

Ahead of its arrival, the storm was initially projected to bear down heavily on southeastern Louisiana and potentially impact the eastern edge of the GOM’s offshore production territory. Several oil and gas companies announced shut-ins ahead of the storm’s landfall, taking preventative measures with the destruction of Hurricane Laura in late August still top of mind. Laura forced offline the Sabine Pass LNG and Cameron LNG terminals in Louisiana. Sabine is back up and running, but Cameron had yet to resume operations.

As of early afternoon Wednesday, approximately 29.7% of natural gas production in the GOM was shut-in because of Sally, according to the Interior Department’s Bureau of Safety and Environmental Enforcement (BSEE). Around 27.5% of oil output also was shut-in. The lost production estimate was based on 29 operator reports submitted to BSEE.

The worst of the Sally’s ire, however, appeared to steer clear of the energy industry’s major offshore facilities, leaving analysts to estimate that production could ramp back up as soon as this week and that output declines could be more than offset by drops in demand imposed by power outages, evacuations and cool temperatures blown in by the hurricane.

Production in the GOM was “relatively flat” on Wednesday compared with the previous day “as some parts of the Gulf are now in the clear,” Genscape Inc.’s Anthony Ferrara said Wednesday. “Pipelines Garden Banks and Nautilus announced that personnel evacuated as a precaution ahead of the storm are returning to platforms as Sally has drifted further east compared to earlier estimates.”

Meanwhile, with fall-like temperatures moving to swaths of the Lower 48’s eastern half, analysts are expecting a plump storage build with the U.S. Energy Information Administration (EIA) latest report on Thursday.

NGI’s model predicted an 84 Bcf injection for the week ending Sept. 11. A Bloomberg survey found estimates ranging from 68 Bcf to 81 Bcf, with a median of 78 Bcf, while a Reuters poll found a low estimate of 68 Bcf and a high of 85 Bcf with a median of 80 Bcf.

Last year, EIA recorded an 82 Bcf injection for the similar period, and the five-year average is a 77 Bcf build.

Energy Aspects projected a 90 Bcf build for the week. The firm estimated a “steady recovery” in production during the report period at 2.0 Bcf/d week/week, with power burns down 3 Bcf/d week/week.

“Our weekly balances peg end-September storage near 3.86 Tcf, a level more than healthy for a typical end-October,” Energy Aspects said in a recent note to clients. This makes “avoiding a 4.0-plus Tcf carryout come end-October nearly impossible unless there is a sharp reversal in pricing. A mild start to winter could see injection activity extend into early November, further swelling inventories.”

EIA reported an injection of 70 Bcf for the week ending Sept 4. That build lifted inventories to 3,525 Bcf and kept domestic storage on pace to approach 4.0 Tcf by the end of October, EIA said. At that level, containment risks could rattle markets.

Analysts this week have noted improvements in U.S. liquefied natural gas (LNG) feed gas activity, with some hopeful that Asian and European demand for U.S. exports ahead of winter could fill the demand void expected to be left by domestic fall weather.

The Federal Reserve said this week that U.S. industrial production rose a mere 0.4% in August, down from a 3.5% increase in July and a 6.1% increase in June. The gains followed April’s 12.9% pandemic-induced collapse.

“Rumors of a V-shaped recovery are greatly exaggerated,” The Schork Report said. “For energy bulls,” the Fed’s latest assessment “was an abject disappointment.”

Spot gas prices moved lower Wednesday as the hurricane ushered in cooler winds and fall temperatures started to spread across the eastern half of the country.

Scorching summer heat had gas-fired power plants cranking to keep air conditioners running full blast until recently. The onset of a cold winter will inject strong heating demand, but in the meantime, fall conditions are expected to hover between those extremes, minimizing weather-driven demand, NatGasWeather said.

“A minor bump in national demand is expected late in the week as a cool shot over Southern Canada provides a glancing blow to the Midwest and Northeast with lows dropping into the slightly chilly 40s,” the forecaster said. “High pressure is expected to regain ground this weekend and next week, with much of the United States quite comfortable with highs of 70s and 80s, besides portions of the hotter West, for light demand.”

The intensity and duration of severe wildfires on the West Coast, including across millions of acres in California, continue to fuel uncertainty across regional economies and energy markets. Case in point: volatile cash prices in California.