After some back and forth, bears prevailed in the battle for control of natural gas futures on Thursday as the first in an expected string of triple-digit storage injections was reported by the Energy Information Administration (EIA). The June natural gas neared the $2.00/MMBtu mark early, but then eventually settled 5.0 cents lower day/day at $1.894. July slipped 4.4 cents to $2.127. 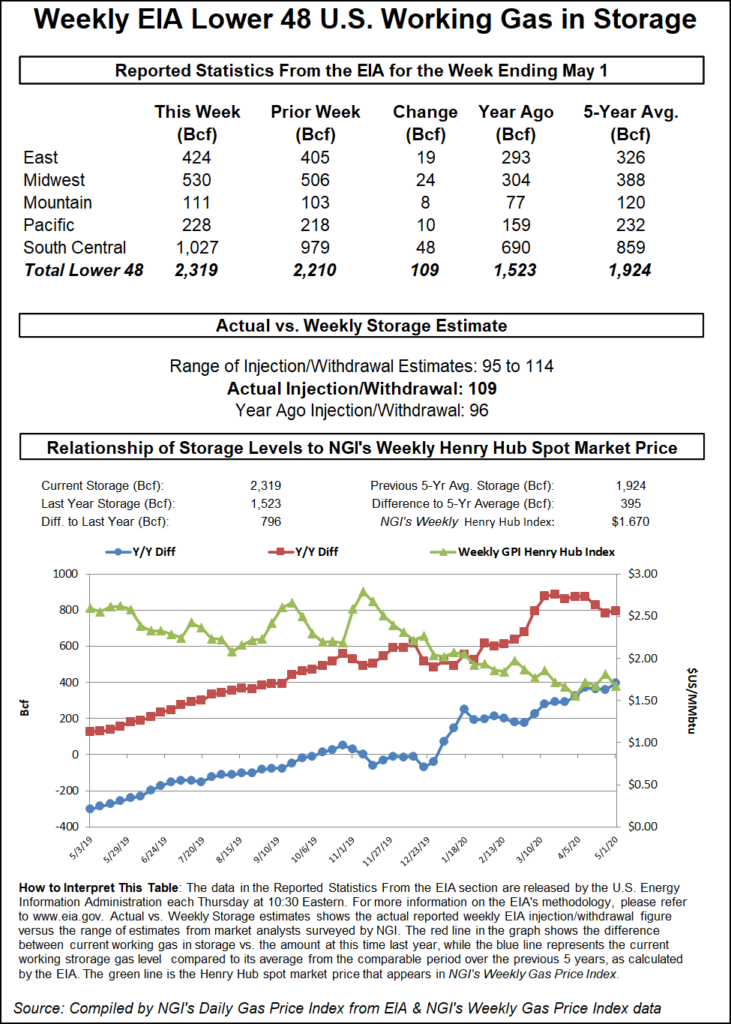 Spot gas prices also fell across most of the United States, though some moderate gains were seen on the chillier East Coast. NGI’s Spot Gas National Avg. slipped 5.5 cents to $1.740.

Thursday’s price action was rather muted compared to earlier in the week when a pipeline explosion and colder weather outlooks sent futures screaming higher. With most of the production impacted by the blast now rerouted, and forecasts maintaining a milder pattern by mid-May, all eyes were on the EIA’s weekly storage inventory report.

The agency reported a 109 Bcf storage injection for the week ending May 1, on the high end of market estimates, but on the money with NGI’s projection. The EIA figure compares with the 96 Bcf increase recorded in the same week last year and the five-year average build of 74 Bcf for the week.

Broken down by region, the South Central region led with a 48 Bcf build, which included a 31 Bcf injection into nonsalt facilities and a 17 Bcf build in salts, according to EIA. The Midwest added 24 Bcf into storage, and the East added 19 Bcf. Pacific inventories grew by 10 Bcf, while Mountain region stocks rose by 8 Bcf.

Bespoke Weather Services said the 109 Bcf injection showed that balances remain “very loose.” However, the firm expects to see some tightening over the next few weeks.

“The problem is that we need to tighten quite a bit in order to lower the risk of completely filling storage this fall, and it remains to be seen if we accomplish this given that there is also risk of LNG slowdowns with global prices remaining at very low levels,” the firm said.

Shipbroker Poten & Partners sees cancellations continuing for the next several months as U.S. gas is now priced higher than overseas destinations. The firm has learned of cancellations from those scheduled to lift the cargoes or from those with knowledge of operations at the liquefaction terminals.

In all, Poten expects 13 cargoes to be canceled at Corpus Christi, eight at Freeport, six at Sabine Pass and another six at Cameron — all in June — with the potential for more throughout the summer and into fall. There also could be some cancellations at Dominion Energy Inc.’s Cove Point terminal in Maryland.

Production declines offer some support for the market, but as Bespoke pointed out, the supply cuts are more of a winter story, especially as the economy continues to recover from the coronavirus pandemic. The firm, for now, is maintaining a neutral near-term sentiment, but said that moving closer to summer, “we do expect a hotter-than-normal summer for the nation, which could add some support.”

Spot gas prices continued to fall Thursday as more markets succumbed to the seasonal demand lull brought on by spring.

NatGasWeather said there was little change in the latest weather models, which continued to show cooler-than-normal conditions across the Midwest and Northeast through the middle of next week. Meanwhile, cities across Texas, the South and the Southeast remained “near perfect.”

The issue, according to the forecaster, is that the period beginning next Thursday (May 14) through May 20 is forecast to warm into the 60s and 70s across the northern United States, making for “light demand.” Texas, the South and the Southeast are expected to slowly heat up as daytime highs in the 80s to lower 90s increase in coverage, though the hottest conditions are to remain over the Southwest.

The decline extended farther upstream into West Texas, where El Paso-Permian spot gas tumbled 29.5 cents to $1.495. Other markets across the Lone Star State slipped mostly less than a nickel day/day.

Benchmark Henry Hub spot gas also fell 5.0 cents to $1.830, with similar losses throughout the rest of Louisiana and across the Southeast.