Natural gas futures seesawed in and out of the green on Friday as traders weighed soaring global prices and the specter of light supplies for the coming winter against relatively benign near-term weather patterns. The September Nymex gas futures contract ultimately settled at $9.296/MMBtu, down 7.9 cents day/day. October shed 7.5 cents and closed at $9.269. 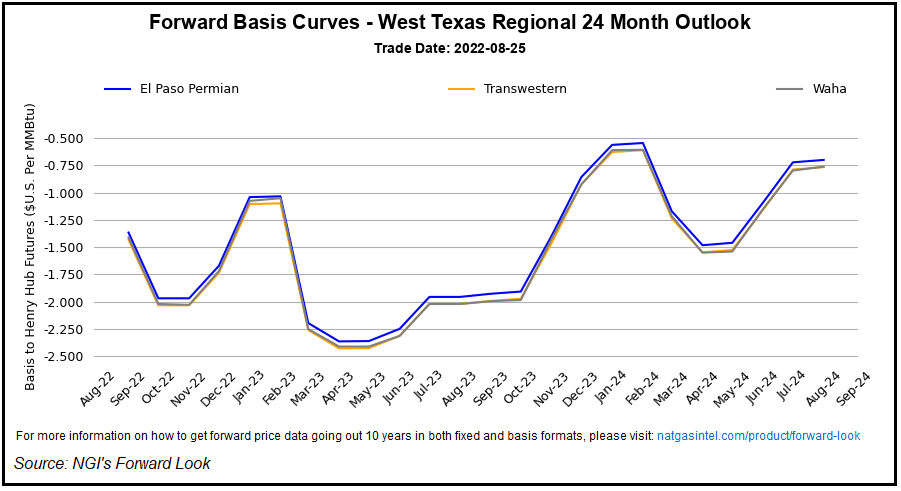 Despite the late-week finish in the red, prices remain lofty by historical standards and analysts say much remains on bulls’ side.

European and Asian natural gas prices spiked over the past week amid intensifying global competition for fuel as countries across the northern hemisphere try to prepare for the coming winter. U.S. LNG exports have played a key role in helping to meet global demand this year. American liquefied natural gas facilities are operating at or near capacity, and this is expected to continue even after the Freeport LNG plant returns to service later this year after a fire in June.

Europe was already increasingly dependent on U.S. exports amid depleted supplies on the continent in recent years. Russia’s war in Ukraine amplified the problem.

Russia’s Gazprom PJSC in July cut gas deliveries via the Nord Stream 1 (NS1) pipeline to 20% of capacity, citing turbine repair delays that it blamed on Western sanctions against the Kremlin because of the war. Then, earlier this month, Gazprom said it would halt all gas flows to Europe via NSI for three days beginning Wednesday (Aug. 31). It cited needed maintenance, but the announcement sparked new worries about the continent’s reliance on Russia and its ability to store enough gas to heat homes and power industrial production this winter.

The crisis could intensify as Asian countries increasingly vie for LNG, pushing up prices. The North Asian spot LNG benchmark hit a five-month high in the past week. In recent days, the European benchmark Dutch Title Transfer Facility set records, surging past the $90 mark.

The bullish global demand picture, however, failed to outshine domestic forecasts for relatively mild late season weather after scorching hot conditions much of the summer.

“Overall, weather patterns are viewed as seasonal much of the next 15 days, besides brief stronger heat early” in the week ahead, NatGasWeather said Friday. Still, “while weather patterns aren’t nearly as hot and intimidating as they’ve been, wind energy generation has been exceptionally light and is aiding stronger demand than what normally would be expected.”

Additionally, Atlantic tropical cyclone activity remains a “wild card” as “several systems have some potential to strengthen in time,” NatGasWeather added Friday. “The most notable will track through the Caribbean the next several days, then potentially into the Gulf of Mexico” in the coming week.

U.S. gas in storage for the winter ahead is improving but remains somewhat precarious following the summer heat and robust cooling needs this year, analysts said.

The Energy Information Administration (EIA) on Thursday reported a 60 Bcf injection into underground storage facilities for the week ended Aug. 19. That was on par with expectations and outpaced the five-year average 46 Bcf injection. Total Lower 48 working gas in storage increased to 2,579 Bcf.

Still, inventories at the close of the latest EIA period were 12% below the five-year average, according to EIA.

Analysts at The Schork Report noted EIA’s latest forecast for end-of-season storage is 3,433 Tcf – likely an adequate level. To reach that level, however, the analysts said EIA is betting on a cumulative injection between now and winter of 854 Bcf, far above the 28-year average injection of 663 Bcf through the remainder of the season.

“With time running out, we lowered the probability of hitting the EIA’s end-of-season target” from 7.7% to 6.3%, the Schork analysts said.

Wood Mackenzie analyst Eric Fell said the latest reported injection appeared “tight/bullish” by about 1.8 Bcf/d relative to the five-year average. “Low renewable generation has been a major driver of the incremental tightness we have seen over the last two weeks,” he said. “Wind utilization has been well below seasonal norms this month.”

“We’ll remain focused on the path ahead for supply as we head into September prior to early winter weather trends gaining a foothold,” the TPH analysts said.

The firm’s estimates show domestic production dipping to around the 96-97.5 Bcf/d range recently, versus early August levels around 98 Bcf/d. Declines have occurred on weaker output from the Appalachian and Permian basins even as the Haynesville Shale “has found solid footing in the 14.5 Bcf/d range through the month,” according to the TPH analysts.

“Beyond supply, investor conversations recently have centered on potential sources of demand destruction outside of LNG as global gas prices have soared,” with power generation, exports to Mexico and industrial sector demand in focus, the TPH analysts said. However, these are “not seen as possible sources of material demand losses, in our view.”

Spot gas prices gave up ground Friday, led lower by losses in Texas and California ahead of weekend weather that was forecast to be hot – but not as hot as much of the summer.

NatGasWeather said Friday it expected near normal demand through the weekend as rain and thunderstorms moved through wide swaths of the country, offsetting lingering strong heat in parts of the South.

National demand was expected to increase early in the coming trading week, the firm said, as upper high pressure strengthens, “resulting in greater coverage of highs reaching the upper 80s to lower 90s, including up the East Coast.”

However, NatGasWeather added, the pattern for much of early September calls for weather systems returning across most of the eastern two-thirds of the Lower 48, with showers and highs of 70s and 80s countering peak temperatures in the 90s across the far western and southern United States.

On the potential hurricane front, AccuWeather forecasters noted that, close to the midpoint of the season, the Atlantic basin is about to finish a quiet August. But conditions could quickly change in September, they said, potentially delivering threats to oil and gas production facilities.

At least two areas that AccuWeather is “monitoring closely for development in the tropics in the coming days could pose a threat to land, including the United States,” the forecaster said Friday.

The firm said it was too soon to forecast with confidence, but “the Gulf Coast of the U.S. could be threatened by a landfalling tropical storm or hurricane during the Labor Day weekend.”