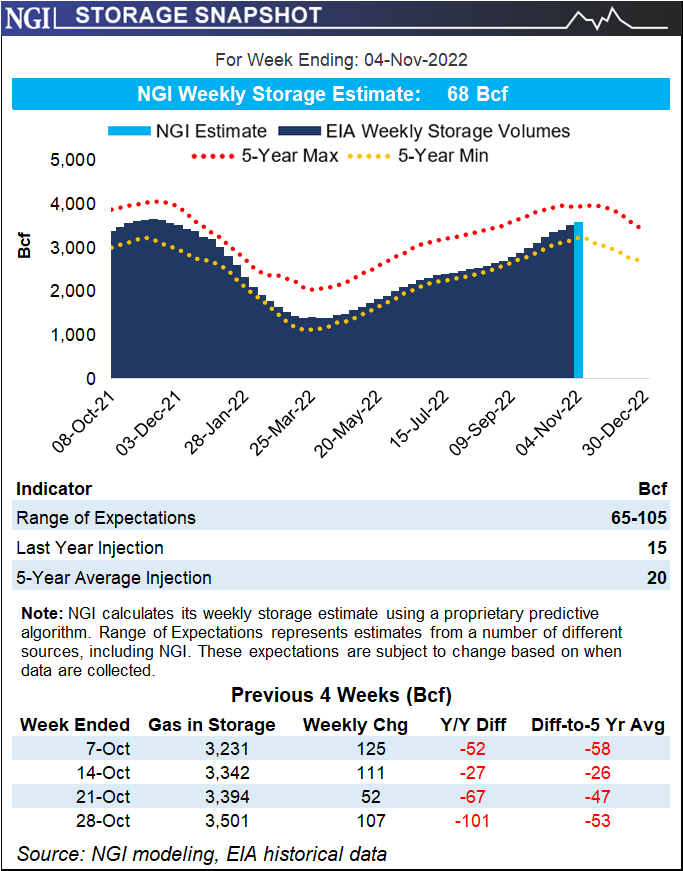 While volatile in recent trading, the prompt month hit a three-week high on Monday.

Weather data trended much chillier over the weekend, including a “hefty” addition of 23 heating degree days from the European model, according to NatGasWeather.

The American model, too, added “a significant amount of demand” for this Saturday through Nov. 18, with lows in the teens to 30s “advancing more aggressively into the southern and eastern U.S. than what the data showed Friday,” the firm said.

“The weather data was also a little colder with the pattern Nov. 19-23, although still with cold air fading toward a more seasonal demand pattern,” NatGasWeather added.

EBW Analytics Group’s Eli Rubin, senior analyst, said Monday this fall “featured the loosest recorded autumn natural gas supply/demand balance,” and enabled utilities to inject an average of 101 Bcf per week for the past eight weeks. This eliminated 219 Bcf from storage deficits versus the five-year average. Futures prices were down more than 40% at one point during the shoulder season, he noted.

The U.S. Energy Information Administration (EIA) reported an injection of 107 Bcf natural gas into storage for the week ended Oct. 28. The result more than doubled the prior five-year average of 45 Bcf and marked the sixth time in seven weeks that EIA printed a triple-digit increase.

Analysts are looking for another stout increase with this Thursday’s inventory report. Early estimates for the week ended Nov. 4 submitted to Reuters ranged from injections of 65 Bcf to 105 Bcf, with an average increase of 81 Bcf. That compares with a five-year average build of 20 Bcf.

One more big storage increase could follow, given a mild weather start to the current week.

The year-on-five-year-average storage deficit remains on track to shrink with the next two EIA prints, according to NatGasWeather. The shift to colder conditions by this weekend, however, would arrive “just in time to prevent deficits from flipping to surpluses,” the firm said.

What’s more, the 14th named storm of the 2022 Atlantic hurricane season was swirling southeast of the United States on Monday. Subtropical Storm Nicole, as it was dubbed by the National Hurricane Center (NHC), was forecast to gradually strengthen and organize into a full tropical storm before powering over the northern Bahamas and toward the eastern coast of Florida around midweek.

NHC meteorologists said Monday the storm could be “at or near” hurricane strength when it batters the east coast of Florida Wednesday into Thursday.

So far this season, there have been seven hurricanes, two of which became major hurricanes.

Nicole’s “main impacts on the Florida Peninsula will be from torrential rain and strong, long-duration winds as well as the effects of pounding waves on the Atlantic coast,” AccuWeather senior meteorologist Alex Sosnowski said. “After swinging back over Florida, Nicole is likely to take a northward turn and track along the Eastern Seaboard of the U.S. late this week and then Atlantic Canada later this weekend.”

AccuWeather said wind gusts of 40-60 mph will power the storm system as it tracks inland and begins to move northward up the Florida Peninsula from Wednesday to Friday. The storm could “wobble into the Gulf of Mexico briefly as it skims along the western Florida coast,” the firm added, delivering fierce winds to major population centers such as Fort Lauderdale, Orlando and Jacksonville.

Spot gas prices surged Monday with robust gains across the Lower 48, albeit off of mostly low levels.

In the near term, weather generally was forecast to prove benign.

“The eastern half of the U.S. will be warmer than normal through Friday, with highs of 60s to 80s besides the Northeast, where a glancing cool shot will drop highs into the 50s,” NatGasWeather said.

Still, with cold weather looming, price gains were pronounced in the East as well.

“Frosty air over the West will spread eastward across the rest of the U.S. Friday-Sunday with rain, snow, and chilly lows” ranging from subzero to the 30s, NatGasWeather said. Notably, the “chilly air will also advance into the southern U.S.” by the coming weekend, ushering in lows of 30s and 40s to swaths of the South, including parts of Texas.

For most of next week, the firm said, much of the Lower 48 will be colder than normal before moderating back to seasonal averages around Nov. 19.

“This is as ridging persists over Alaska, directing an air flow downstream from the higher latitudes,” the forecaster said. “…The forecast has moderation for the South as the period evolves, with belows becoming more restricted to the northern half by the end of the period.”