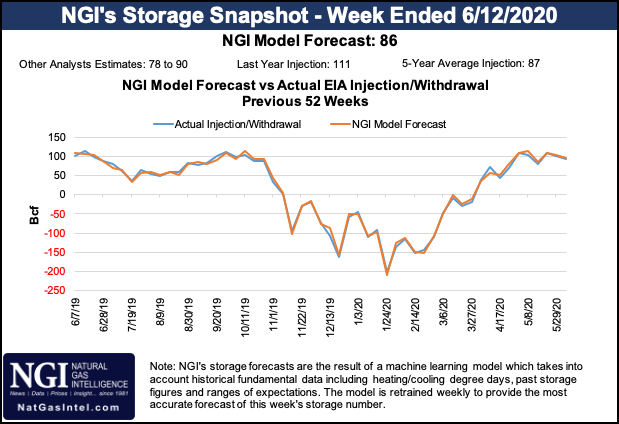 Subdued LNG feed gas demand and anemic U.S. export levels in the face of soft economic activity across Europe and much of Asia, along with milder-than-expected weather this week that drained power sector gas burns and weakened cash prices, weighed down futures over recent trading days.

EBW Analytics Group noted that Tuesday’s drop in gas futures marked the 16th day during the second quarter on which the Henry Hub spot price fell more than 10.0 cents below the front-month contract — “a feat that occurred zero times” in 2Q2019.

“The market could be setting the stage for an extended rally,” EBW said. “Whether this occurs will depend in part on the intensity of late June and July heat and the ability of LNG feed gas flows to stabilize at or near current levels.”

Bespoke Weather Services said Wednesday’s forecasts shifted “slightly hotter” and showed “a pattern into early July that would be more favorable for heat,” though unusually high temperatures are not yet in the offing. The firm said its 15-day outlook calls for national gas-weighted degree days to average above normal.

Further out, “our expectation remains that the shift into La Niña mode favors heat more often than not, which has worked out this month, and we suspect more of the same into July, with the risk of stronger heat relative to normal increasing as summer progresses,” Bespoke said, lifting the likelihood of greater power burns.

Against that backdrop, the forecaster predicted that the U.S. Energy Information Administration (EIA) on Thursday will report a build of 87 Bcf for natural gas storage for the week ending June 12. That would mark a decline from the 93 Bcf injection a week earlier.

A Bloomberg poll of nine analysts found injection estimates ranging from 78 Bcf to 87 Bcf, with a median of 84 Bcf. A Wall Street Journal survey produced an average of 85 Bcf, in line with results of a Reuters survey. NGI estimated an 86 Bcf build.

The relatively bullish expectations compare with a build of 111 Bcf during the same week a year earlier and the five-year average build of 87 Bcf.

Globally, oil producers also continue to curtail investments and output amid pricing pressure imposed by the coronavirus pandemic. Oil prices have rebounded from the lows set in April, but they remain well below pre-pandemic levels, and demand is still relatively modest as travel and economic activity are held in check amid public health officials’ warnings about a second wave of the virus.

Of course, the pandemic-induced forces continue to curb LNG demand as well, leaving the outlook entrenched in uncertain territory. Exporters need stronger demand from Europe, analysts say, but that could prove elusive for some time.

Since April, deliveries to date in June to U.S. LNG export facilities fell 3.8 Bcf/d, from 7.9 Bcf/d to about 4.1 Bcf/d, said energy analyst Anna Lenzmeier of BTU Analytics. Looking ahead, in addition to the pandemic, the Gulf Coast is wading into tropical storm season, and export facilities often reduce volumes ahead of storms to maintain LNG storage capacity, she said.

If a 3.8 Bcf/d decline in deliveries equates to a similar reduction in exports, and daily injections in Europe continue to be about 1.1 Bcf/d lower than 2019 rates, “European gas inventories should not hit capacity this year, all else equal,” Lenzmeier said.

“A sustained 3.8 Bcf/d decline in U.S. LNG exports could save European gas storage from a precarious fate this summer, but calls into question the viability of U.S. exports if European demand does not rebound strongly over the winter,” she added. “A second warm winter combined with lingering Covid-19 impacts to demand could prove to be challenging for U.S. exports to ramp up to capacity in 2021.”

The weather outlook helped drive up spot gas prices across every region of the Lower 48.

While a weather system has stalled over the East, delivering heavy showers with highs in the 60s to 80s and a cooler system is tracking from the Northwest into the Rockies with highs in the 50s to 70s, intense heat has settled in between the two systems, NatGasWeather said. Highs are in the 90s across Texas and the Plains and in the 100s over the Southwest.

What’s more, “national demand will briefly increase late this weekend as highs warm across the East into the 80s to lower 90s.”

SoCal Citygate, down 15.5 cents to $1.720, was among only a couple outliers throughout the country.

On the pipeline front, Tennessee Gas Pipeline (TPG) said it would perform a series of pigging operations from MLV 230-1 to MLV 237-1 beginning Thursday, with the work expected to culminate June 25. Several locations are to be shut-in during the operations. Genscape Inc. said the operations could potentially reduce receipts on TGP in Western New York by nearly 400 MMcf/d based on the prior seven-day flow average, though reroute possibilities could mitigate reduction levels.