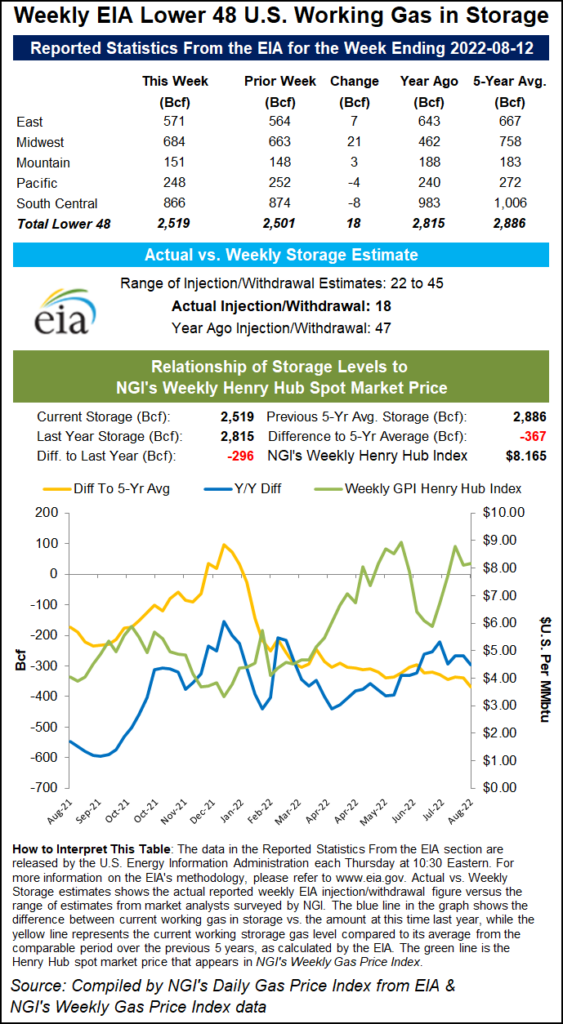 With not much changing in the long-range weather outlook, futures traders on Wednesday focused squarely on the next round of government inventory data. Wind generation dropped sharply during the reference period, and market observers noted a stronger pull on natural gas for power generation. This, combined with a much higher-than-normal number of cooling degree days, should likely result in a lighter-than-average injection into storage.

Estimates ahead of Thursday’s Energy Information Administration (EIA) weekly inventory report were wide ranging, but clustered around a build in the mid-30s Bcf.

The EIA recorded a build of 46 Bcf during the same week a year ago, while the five-year average injection is 47 Bcf.

Total working gas in storage as of Aug. 5 stood at 2,501 Bcf, which is 268 Bcf below the year-earlier level and 338 Bcf below the five-year average, according to EIA.

Meanwhile, production appears to be struggling to reclaim highs from last week.

Wood Mackenzie said its data on Tuesday was revised lower amid maintenance in the New Mexico portion of the Permian Basin. The work at Targa Resources Inc.’s Red Hills processing plant resulted in steep declines on the Natural Gas Pipeline Co. of America and Transwestern pipelines.

In addition to the Targa plant, Wood Mackenzie said the High Island Offshore System (HIOS) had to shut in the pipeline because of an unplanned fitting replacement on the topside piping. The timely cycle nominations for Aug. 17 were 28,249 MMBtu/d at West Cameron Block 167 Deep Water Link, representing the cut in production on HIOS, according to Wood Mackenzie.

EBW Analytics Group noted that in addition to the storage trajectory and the production dip, the more potent driver of U.S. prices may be soaring European gas prices.

Dutch Title Transfer Facility prices have been above $60 this week amid robust demand for LNG and tight supplies. Europe is aiming to cut gas consumption by 15% through next spring given the shortfall. However, higher prices have attracted a flood of liquefied natural gas that has the continent on track to fill storage to a target of 80% by Nov. 1.

Against that backdrop, technical analysis suggests $9.55 gas is likely and $9.75 still possible, according to EBW. Any price push higher may stall below $10, but there is little fundamentally preventing an even steeper increase, EBW senior analyst Eli Rubin said.

“Further, although momentum may fade near term, another rally over the next 30-45 days could carry Nymex futures into double digits as the heating season approaches.”

Such lofty prices have been common at several locations throughout the United States this summer. Extreme heat and drought conditions continue to plague large swaths of the country from the West Coast to the Southeast.

The National Weather Service said dangerous hot weather would continue for the Pacific Northwest to the central valley of California. The Gulf Coast also was in store for above-average high temperatures, from East Texas to the Florida Panhandle.

Prices were higher heading east. In Louisiana, Henry Hub jumped 26.0 cents on the day to average $9.505 for next-day gas, while Transco Zone 5 ticked up only 2.0 cents but averaged even higher at $9.985.

On the West Coast, cash prices remained well above $10 despite slipping a bit in some locations. SoCal Citygate fell 4.5 cents day/day to average $12.095, while KRGT Del Pool shed a half-cent to average $11.190.

Despite the slight dip in gas prices, demand remained strong in California. The California Independent System Operator (CAISO) on Wednesday called for a voluntary reduction in electricity consumption from 4-9 p.m. PT. The call for conservation was made to prevent further emergency measures, according to the CAISO. These include rotating power outages.