For the third straight session, natural gas futures traded either side of even Thursday as a larger-than-expected weekly storage build made only a small dent in prices. In the spot market, prices ratcheted higher across the middle third of the country with winter cold moving in, while volatility continued in the West; the NGI Spot Gas National Avg. climbed 7.5 cents to $3.455/MMBtu. 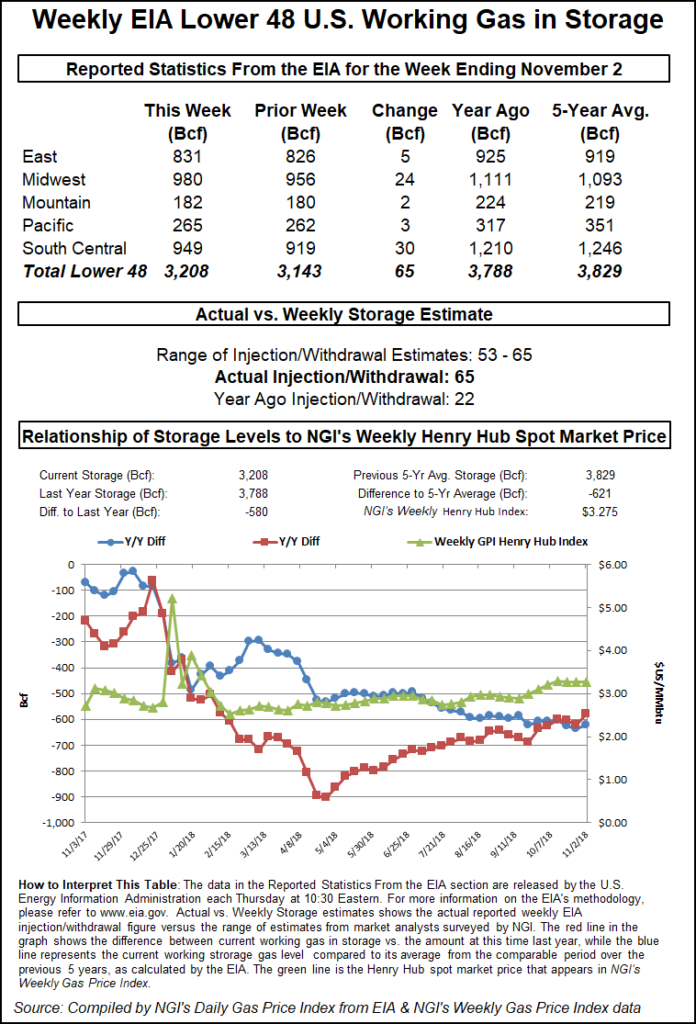 After prompt month futures gapped up from $3.313 to $3.437 over the weekend, from a technical standpoint it’s bullish that the market has made “very little effort to fill that gap,” Powerhouse CEO Alan Levine told NGI. Add to that storage deficits and a muted response to a bearish miss in Thursday’s Energy Information Administration (EIA) storage report and “I think these are all indications that the market may be ready to move higher.”

Still, that move higher hadn’t occurred as of Thursday, suggesting the market is “very seriously evaluating its options,” Levine said. “…For the moment, I think I’m more likely to be a bull than a bear.”

While colder-trending, the afternoon European weather model Thursday showed milder conditions across much of the country Nov. 19-23, according to NatGasWeather.

“However, several of the European and Global Forecast System ensemble solutions show ways cold air can push into the northern U.S. for colder trends in time,” the forecaster said. “Overall, most of the midday data remains quite cold through Nov. 17-18, stalling the eroding of cold air by a day, but also still with a more seasonal/milder pattern setting up Nov. 19-22 with demand returning closer to normal, potentially a little lighter.

“But again, we must be cautious since the Northern Hemisphere pattern is set up in ways the northern U.S. could trend colder quickly, but with much more to prove.”

EIA reported a 65 Bcf injection in its weekly U.S. natural gas storage report Thursday, surprising to the high side of most estimates on the strength of a hefty gain in South Central inventories.

The 65 Bcf net build for the week ended Nov. 2 compares to a 22 Bcf build recorded in the year-ago period and a five-year average injection of 48 Bcf. The injection — well above many estimates and nearly outside the range of major surveys — shrinks deficits more than expected as the market prepares for the season’s first serious stretch of winter heating demand.

With so much focus on cold temperatures forecast for this week and next, what the plump build showed about last week’s supply/demand balance did not appear to dramatically alter the market’s overall outlook, at least not at first.

Prior to the report, major surveys showed market participants looking for a build in the upper 50s Bcf. Intercontinental Exchange EIA financial weekly index futures had settled Wednesday at 59 Bcf.

Bespoke Weather Services said the 65 Bcf build was “quite loose to market expectations, initially sending prices lower before afternoon model guidance added a significant amount of medium-range heating demand” to help prices gain heading into the settle. “This recent range from $3.45-$3.60 is much of the reason our sentiment has remained neutral all week as we have not seen a clear catalyst to break out of it.

“That may be changing, however, as Friday we are looking for even stronger cash prices out of Henry Hub and any sustained medium-range heating degree day additions to potentially move the front of the strip at least into if not briefly above the $3.60 level,” the firm said. “We had looked for this earlier in the week as well but cash prices did not exude enough strength to make it possible; stronger cash Thursday and very significant cold this weekend make a morning bounce Friday off cash strength more likely.”

Physical prices strengthened from the Midwest and Midcontinent to the Gulf Coast and Texas Thursday as forecasts called for heating demand to ramp up across the Lower 48 over the next several days.

Radiant Solutions was calling for temperatures to cool to around 10-20 degrees below normal starting Friday and continuing through the weekend across a number of population centers throughout the middle third of the country, including Chicago, Minneapolis, Cincinnati, Memphis, St. Louis and Dallas.

“A preview of winter-like temperatures is already in place for the central and northern Plains with today’s highs ranging from the teens to 30s down to the Kansas/Oklahoma border,” the National Weather Service said Thursday. “Several inches of snow have also been reported across Nebraska and Kansas as of Thursday afternoon. The cold temperatures will continue to advance south into New Mexico, Oklahoma and Texas for Friday with forecast maximum temperatures of 15-25 degrees below early November averages.

“The combination of the anomalously cold air and an upper level disturbance will spread snow into northern Wisconsin, the Upper Peninsula of Michigan along with Lower Michigan by early Friday morning as a surface cyclone begins to organize over the Ohio Valley.”

The price spikes at Northwest Sumas reflect the “impact of constraints bringing gas into the market amid an otherwise modest weather-driven demand increase,” Genscape Inc. senior natural gas analyst Rick Margolin said. “…Temperatures around the Seattle market are running slightly cooler than normal by about 4 degrees, and total Pacific Northwest demand has remained above 2 Bcf/d this week, but those levels by themselves are not terribly outstanding.

“The basis gains are exaggerated due to the limitation on molecules to supply the market” after last month’s pipeline rupture on Enbridge Inc.’s Westcoast Transmission system, Margolin said. “The region is being forced to make up for lost volumes from British Columbia through increased imports from the Rockies, Alberta (at times) and storage withdrawals.”

Maintenance on the Southern California Gas (SoCalGas) system could limit 100 MMcf/d of imports from Transwestern beginning Friday and continuing through next week (Nov. 9-16), according to Genscape analyst Matthew McDowell. SoCalGas plans to limit flows to zero through its “Transwestern-Needles” and “Questar Southern Trails-Needles” interconnects during the maintenance.

“The Transwestern interconnect has flowed an average of 110 MMcf/d for the last month, while the Questar interconnect has been at 0 MMcf/d following an explosion last October,” McDowell said. “Both of these locations are within SoCalGas’ Needles/Topock Area Zone, which currently has its total firm operating capacity limited to 270 MMcf/d due to ongoing repairs following the explosion.”

During a similar event on April 24-25 of this year that restricted imports from Transwestern, SoCalGas was able to compensate through increased receipts from an interconnect with Kern River, the analyst said.