Natural gas futures edged higher again on Wednesday, extending a rally to three days, as traders ultimately paid more attention to robust heating demand than the protracted shutdown of a key export facility and the likelihood of a relatively robust storage injection. 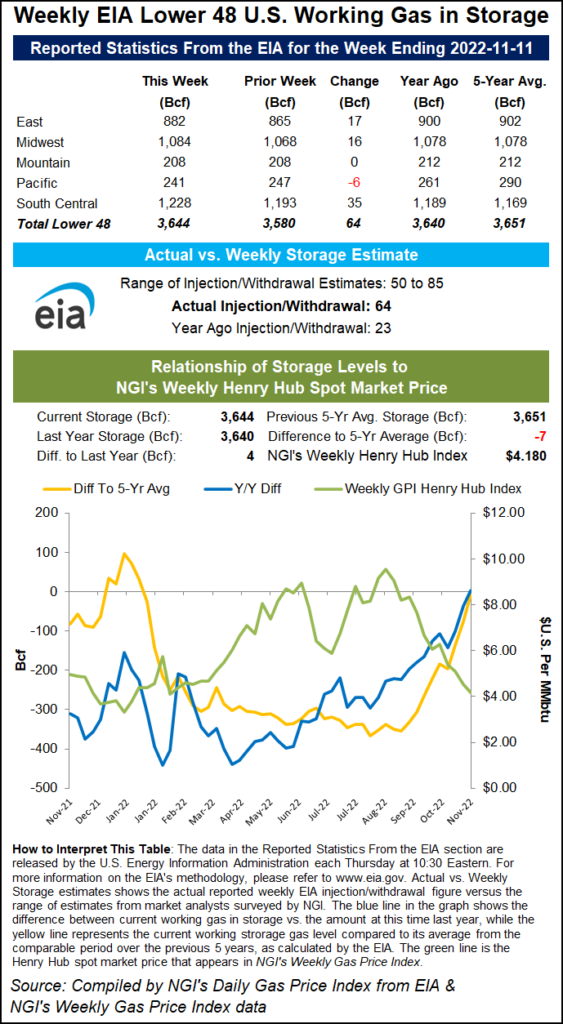 Futures trading Wednesday proved volatile, with prices hanging in the red much of the day before flipping higher late.

Officials at the export terminal in Texas, however, did not address the elephant in the room from natural gas traders’ perspective: Will the facility reopen in November as previously targeted?

Freeport LNG “curiously failed to announce what mattered most and whether the November restart date was still on track,” NatGasWeather said. “The failure to again address it has led many market participants to believe it will be delayed.”

The timing of the 2.0 Bcf/d Freeport LNG terminal’s return to service has captivated the market because the prospect of potential delay into 2023 hampers the export demand outlook.

“Freeport LNG is likely extending the ongoing outage until 2023 as buyers have been informed to cancel shipments scheduled for November and December due to regulatory and repair delays,” Tudor, Pickering, Holt & Co. analysts said Wednesday.

It also leaves more gas in the Lower 48 that could be used to further fortify storage levels. This could ease supply concerns ahead of winter and, simultaneously, add bearish price sentiment.

The market will get its next look at storage levels on Thursday, when the U.S. Energy Information Administration (EIA) prints its reading for the week ended Nov. 11. Analysts expect a sizable increase relative to historic norms. Utilities often withdraw gas from underground stocks by November.

The median of estimates submitted to Bloomberg was a 65 Bcf injection. Predictions ranged from builds of 50 Bcf to 72 Bcf. Reuters’ poll landed at a median increase of 62 Bcf and spanned 50 Bcf to 85 Bcf.

The Wall Street Journal’s survey showed a range of 50 Bcf to 72 Bcf, and an average injection expectation of 63 Bcf.

NGI estimated a build of 59 Bcf. That compares with an injection of 23 Bcf a year earlier and a five-year average withdrawal of 5 Bcf.

EIA reported a 79 Bcf injection into storage for the period ended Nov. 4. That increase boosted inventories to 3,580 Bcf and brought stocks within 2.1% of the five-year average.

Thursday’s EIA print, however, could mark the end – or near end – of this year’s injection season. Freezing air and snow pushed into the Midwest over the past weekend and continued to spread into the East this week. This drove up consumption of natural gas to heat homes and businesses – and ultimately powered futures ahead Wednesday.

It also warned of likely disruptions to production. Already, output this week is down about 1 Bcf/d, and further declines are expected. “As a result of widespread subfreezing temperatures, the first wellhead freeze-offs of the season are in the process of dropping U.S. production by 2 Bcf/d,” NatGasWeather said.

Models have struggled to determine how much cold air will linger over the Lower 48 into the last week of November. However, NatGasWeather said midday forecasts on Wednesday shifted colder Nov. 24-28 thanks to new expectations for a strong weather system to track across the northern United States in that period.

That noted, “longer-range forecasts continue to favor a seasonal to slightly bearish pattern for most of the U.S. to start December, although with the risk of colder trends” further into next month, the firm added.

Spot gas prices on Wednesday stepped lower for a second straight day, led down by declines in the Rockies and the Midwest.

Amid curtailed production and wintry weather, analysts at The Schork Report said Wednesday price declines were difficult to reconcile.

“Given the surge in heating demand in the Midwest and East,” they said, “natty’s weakness is interesting.”

National Weather Service (NWS) data on Wednesday substantiated NatGasWeather’s read that temperatures could moderate by early next month. In the near term, however, this week’s cold and snowy conditions across the nation’s midsection and in the East were likely to persist into next week. NWS forecasts called for bitter overnight lows in northern markets that could drop below zero at times over the next several days.