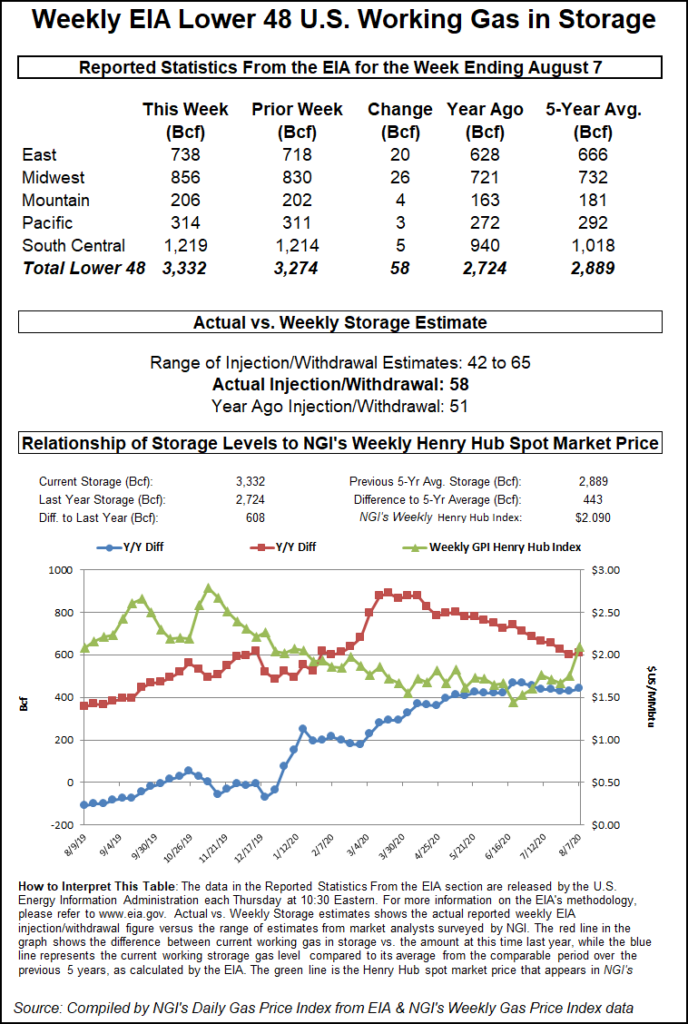 Spot gas prices were mostly higher except on the East Coast, resulting in a 7.5-cent increase for NGI’s Spot Gas National Avg. to $2.065.

After a string of small injections, the gas market was eagerly awaiting the Energy Information Administration’s (EIA) latest storage report, as the reference period included a significant drop in demand in the wake of Hurricane Isaias, which slammed North Carolina Aug. 3 before heading up the East Coast. Ahead of the report, consensus had built around a mid-50 Bcf injection, and the EIA’s 58 Bcf came in a few Bcf above that level.

Bespoke Weather Services said the 58 Bcf build was tighter than the five-year average, “slightly, even though the build was larger.” However, its data suggests some loosening has occurred this week, “even factoring in a number in the high 30s (market is projecting higher), which could pose downside price risks.”

Given Thursday’s price action, it’s plausible to see a move lower for futures in the coming days. The September contract traded in both positive and negative territory before ultimately settling near the higher end of the range.

Broken down by region, the Midwest added 26 Bcf into storage, and the East added 20 Bcf, according to EIA. Mountain and Pacific inventories each grew by less than 5 Bcf, while the South Central region reported a net injection of 5 Bcf, which included a 1 Bcf build into salt facilities and a 5 Bcf build in nonsalts.

“While the supply/demand balance yet again was proven to be too loose” in Thursday’s EIA report, NatGasWeather analysts said the natural gas markets have been betting a tighter market is in the offing.

“But when? LNG feed gas still needs to increase quite a bit further to bring it into balance, while any production declines would help,” the firm said. “Of course, hot patterns lasting as long as possible and at least into early September will also be required.”

The overnight weather data added around four cooling degree days, while the midday Global Forecast System (GFS) model was a little hotter a few days and slightly cooler a few, “offsetting for little change,” NatGasWeather said. Overall, the latest data held a relatively hot U.S. pattern the next several days but with stronger weather systems/cool shots arriving across the eastern half of the country late this weekend through next week for lighter national demand.

“Much of the data still favors warmer temperatures gradually returning Aug. 23-27, although some of the data has teased cooler trends could occur across the northern or eastern United States in time, such as the latest GFS hinted,” the firm said.

Sizzling temperatures on the West Coast drove another round of gains in cash markets across the region.

Solid increases also were seen throughout the Rockies, where Opal climbed 24.5 cents to $2.205. Gains were seen in other producing regions as well, including a 16.5-cent increase to $2.010 at OGT in the Midcontinent and a much smaller 4.5-cent increase to $1.655 at Waha in the Permian Basin. Most other markets that ended in the black were up only around a nickel or so day/day, while it was a much different story on the East Coast, where prices continued to come off recent highs. Dominion South cash was down 12.0 cents to $1.035, and Tenn Zone 6 200L dropped 28.5 cents to $1.510.