Natural gas futures surged on Monday as a new tropical storm threatened to further shake the Gulf of Mexico’s (GOM) production foundation, a development that could hamper supply/demand balances at a time when gas in storage for winter is already light. 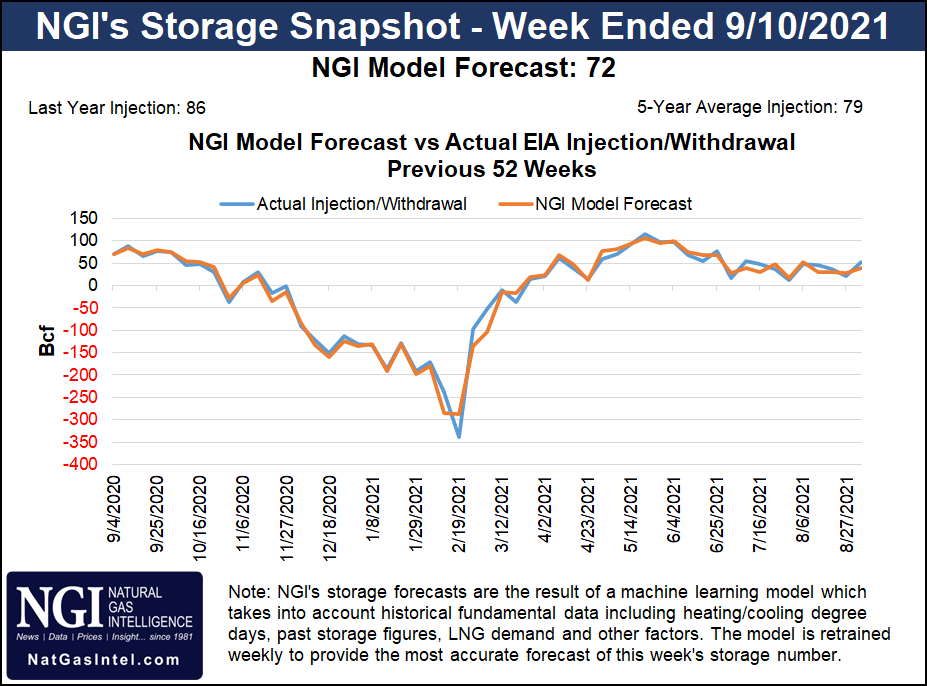 Tropical Storm Nicholas formed Sunday and arrived in the GOM on Monday as production in the region was still reeling from the aftershocks of Hurricane Ida. According to federal estimates, more than one-half of the natural gas produced in the GOM pre-Ida remained offline Monday. Ida made landfall in Louisiana on Aug. 29.

Nicholas was forecast to move onshore along the Texas coast by Monday evening as a strong tropical storm or possibly as a Category 1 hurricane, delivering heavy rains and dangerous storm surges, according to the National Hurricane Center (NHC). It could dump 20 inches of rain at times to both Texas and Louisiana.

The potential for flooding to force more production offline rattled markets. The National Weather Service forecast torrential rains that could cause flooding from Corpus Christi, TX, to Houston to western Louisiana.

Nicholas marked the 14th named storm of the season. The number of storms in an average season typically does not reach 14 until November, the NHC said. Nicholas is the eighth named storm to strike the Lower 48 this year.

“More disruptions from extreme weather is a cause of concern for producers and a reason for traders to add price premiums,” said Rystad Energy analyst Nishant Bhushan.

The storm also could threaten liquefied natural gas (LNG) exports out of Corpus Christi early this week, analysts at EBW Analytics Group said Monday. However, LNG demand is strong and exports were expected to bounce back quickly, barring massive damage. LNG feed gas volumes hovered around 11 Bcf the past week, near record levels, as demand from both Europe and Asia is consistently elevated amid supply shortages on both continents.

Domestic natural gas demand also has held strong into September – after a scorching hot summer — as August-like temperatures persist across swaths of the Lower 48.

“Over the weekend, forecasts moved hotter, with some impressive heat for this time of year on tap for much of the eastern two-thirds of the nation,” Bespoke Weather Services said. This would add to consistently lofty temperatures in the Southwest and parts of California. “In fact, a few days over the next couple of weeks will feature near-record” daily gas-weighted degree day (GWDD) totals, the firm said. “The heat we have is still easily bullish, with total GWDDs above even the inflated five-year average.”

Production last week held around 90 Bcf in Ida’s wake – about 2 Bcf/d below the summer average. Even prior to Ida, output was running shy of demand. This prevented utilities from injecting average levels of gas into storage during the summer months.

With demand strong, production light and Nicholas presenting the potential for new output cuts, futures on Monday added to big gains already made in September. The prompt month advanced 5% last week and 8% the previous week.

Bespoke cautioned that storage may fail to reach the 3.5 Tcf level it said could be needed to support heating needs if the coming winter starts early or proves particularly cold.

The U.S. Energy Information Administration’s (EIA) latest data showed utilities injected 52 Bcf natural gas into storage for the week ended Sept. 3. The increase was not enough to alleviate stockpile concerns. The build lifted inventories to 2,923 Bcf, but that was well below the year-earlier level of 3,515 Bcf and the five-year average of 3,158 Bcf.

For EIA’s next print, scheduled for release Thursday, analysts are looking for a larger build. NGI estimated a 72 Bcf increase for the week ended Sept. 10. Bespoke preliminarily estimated an injection of 79 Bcf.

The five-year average for this time of year is an increase of 79 Bcf, and for the comparable week a year earlier, EIA reported a build of 86 Bcf.

“Our storage situation remains precarious enough so that there is risk we would need to price out LNG in the event of a big cold winter, which of course would mean much, much higher prices, even from these levels,” Bespoke said. “With such a bullish backdrop, it is difficult to see what takes us lower, barring a huge gain in production, more than just getting the Gulf back online.”

Spot gas prices soared across the Lower 48 on Monday, as seasonally strong demand converged with the supply concerns.

Out West, where prices have been volatile but generally lofty in recent weeks, hubs tallied strong gains across the region. Malin helped lead the upward charge with a gain of 61.0 cents to $5.670.

NatGasWeather said the northern half of the United States is forecast to experience comfortable highs in the 70s and 80s much of this week, as weak cool fronts track through with showers. Temperatures will cool across the Texas Coast as heavy rains and strong winds arrive with Nicholas.

The rest of the southern half of the country, however, “will be very warm to hot as high pressure rules with highs of upper 80s and 90s, including locally 100s in California and the Southwest,” the firm said.

Looking ahead to next week, NatGasWeather added, the southern United States is to remain warmer than average as high pressure persists and keeps temperatures elevated.

On the supply front, meanwhile, the Bureau of Safety and Environmental Enforcement (BSEE) estimated 51.61% of the GOM gas produced before the hurricane, or 1.15 Bcf/d, was still shut-in. BSEE said 43.60% of the oil produced, or 793,522 b/d, also remained offline.

Most of the platforms and rigs that were evacuated ahead of the storm are now manned, according to BSEE. Forty-seven platforms (8%) remained evacuated, and one rig (9%) was still unmanned. In addition, two dynamically positioned rigs remained out of position.