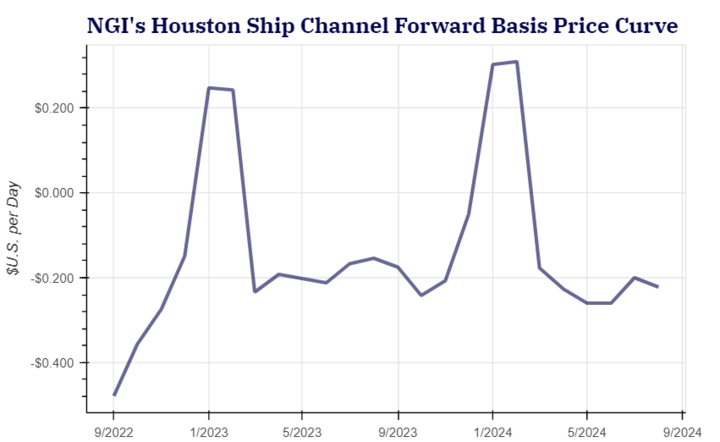 Cash prices also recovered some of the prior days’ losses despite thunderstorms set to ease temperatures across large swaths of the country. NGI’s Spot Gas National Avg. picked up 5.5 cents to $7.900.

In East Texas, a one-day event Tuesday on Gulf South along Index 129 was impacting East Texas/North LA receipts by up to 100 MMcf/d. A force majeure on Natural Gas Pipeline Co. of America also was restricting about 495 MMcf/d on the Gulf Coast #3 mainline between compressor stations (CS) 304 and 303 until Friday (Aug. 12).

In the Texas portion of the Permian, decreases were concentrated along El Paso Natural Gas with maintenance on Line 110 and at the Afton CS that was restricting about 50 MMc/fd until Friday. These events are also impacting Permian New Mexico, according to Wood Mackenzie.

In the Northeast, the declines were concentrated in Pennsylvania, split equally between the Northeast and Southwest portions of the state. In Northeast Pennsylvania, the decreases were along Transcontinental Gas Pipe Line Co. and Millennium Pipeline, but Wood Mackenzie said there were no posted notices of maintenance. In Southwest Pennsylvania, the declines were along the Texas Eastern Transmission and Eastern Gas Transmission and Storage system, but again, no maintenance events were posted.

“However, there is maintenance along Equitrans Midstream on the Cain Ridge Compressor Station in the Eureka Lean Gathering System that is expected to conclude on Aug. 11,” Wood Mackenzie analyst Laura Munder.

Meanwhile, weather models saw little change overnight but the midday data did confirm a cooling trend on the horizon. NatGasWeather said weather patterns for beginning Wednesday through Aug. 22 have gone from “solidly bullish” to now “only neutral.” This is most apparent in the European Centre model, which shows comfortable temperatures arriving in the Great Lakes and eastern third of the country.

“When combined with strong production and soft LNG exports due to Freeport remaining offline, weekly storage builds have potential to print larger than normal for the second half of August,” NatGasWeather said.

Of course, the background state remains bullish for now with storage deficits near 335 Bcf, according to the forecaster. Conditions also remain hot in Texas where strong power burns are being aided by light wind energy generation in the state.

“The next couple days of trade will be of interest to see if bears step in to sell” Tuesday’s rally and defend $8, with larger builds lining up for the second half of August. Or will bulls continue to find reasons to buy the dip, as they’ve done in nearly all instances over the past year.” NatGasWeather said.

“There will continue to be regionally strong demand over the West, Plains and Texas, but with the eastern U.S. becoming quite comfortable most days going forward, the pattern just isn’t as ominous as it has been,” it added.

Mobius Risk Group also cautioned that with very little shape at the front of the Nymex curve, there is a relatively weak economic signal to inject ahead of winter. That said, basis markets across the country for the past several months have taken over in terms of curve shape, it said.

Mobius pointed out the “remarkable” slope from nearby contracts to peak winter contracts, which then trend back down again for the summer 2023 injection season.

“This is not to say that the Nymex winter summer shape is not significant,” Mobius analyst Zane Curry said. “In fact, it is as steep as it has been in more than a decade.”

However, regional markets are even more pronounced in this regard than the Henry Hub. An “added wrinkle” is that many locations are deeply discounted in the front of the curve, or steeply in contango for the through March.

For example, Houston Ship Channel September basis is almost 50 cents behind Henry Hub, while January is trading at an almost 25-cent premium and summer 2023 is back to a 20-discount, NGI Forward Look data shows. In the Upper Midwest, the Chicago Citygate is trading similarly through next summer.

“In a world where every market is being forced to fend for itself with little help from neighboring locales, this is both a means to incentivize much-needed storage injections, and concurrently a reflection of which locations are more susceptible to balance-of-summer Btu shortages,” Curry said.

Spot gas prices were stronger across most of the Lower 48, even as the prolonged heat wave that has blanketed the country this summer appears to be winding down.

The National Weather Service (NWS) said cooler temperatures would begin to filter into the Great Lakes and Northeast Tuesday and continue through Wednesday. The cold front is expected to sink southeastward across the Northern Plains into the Upper Mississippi Valley and Upper Lakes region. Showers and thunderstorms developing ahead of and along the leading cold front are forecast to bring heavy rainfall and flash flooding from the Mississippi Valley to the Central Appalachians.

The crisper air should be a welcome relief for East Coast residents, some of whom have had to resort to dry ice for relief in the sweltering temperatures. New York City utility Consolidated Edison Inc. (Con Ed) distributed the dry ice in the Bronx to customers who lost power because of the intense heat. On Monday, Con Ed asked customers in four neighborhoods in the southwestern part of the Bronx borough to conserve energy while crews repaired equipment. It reduced voltage in the area by 8% to protect equipment and maintain service as crews made repairs.

Despite the cooler temperatures, several locations in Appalachia strengthened amid the production declines observed on Tuesday. Eastern Gas South next-day gas climbed 15.5 cents to average $7.255, and Transco-Leidy Line tacked on 8.0 cents to average $7.405.

Downstream in the Northeast, however, the losses were significant. Algonquin Citygate cash plunged 83.5 cents to $7.615 for Wednesday’s gas day, and PNGTS tumbled $2.895 to $9.730.

Elsewhere, Southeast locations were up as much as 46.5 cents at Transco Zone 5, where spot gas prices averaged $9.780 for next-day gas delivery.

Price increases were capped at around 30 cents throughout Louisiana, the Midwest and Midcontinent. Similar gains were seen in Texas, though some locations in the eastern part of the state notched heftier increases. Carthage spot gas prices soared 42.0 cents to $7.400, while Katy picked up 25.5 cents to $7.610.