Natural gas futures plunged Thursday despite an intensifying cold front on the horizon. Selling accelerated throughout the session on a trio of bearish drivers that sent December Nymex gas spiraling to a $5.736/MMBtu intraday low. The prompt month eventually settled at $5.782, off 41.6 cents from Wednesday’s close. January dropped 40.6 cents to $5.871. 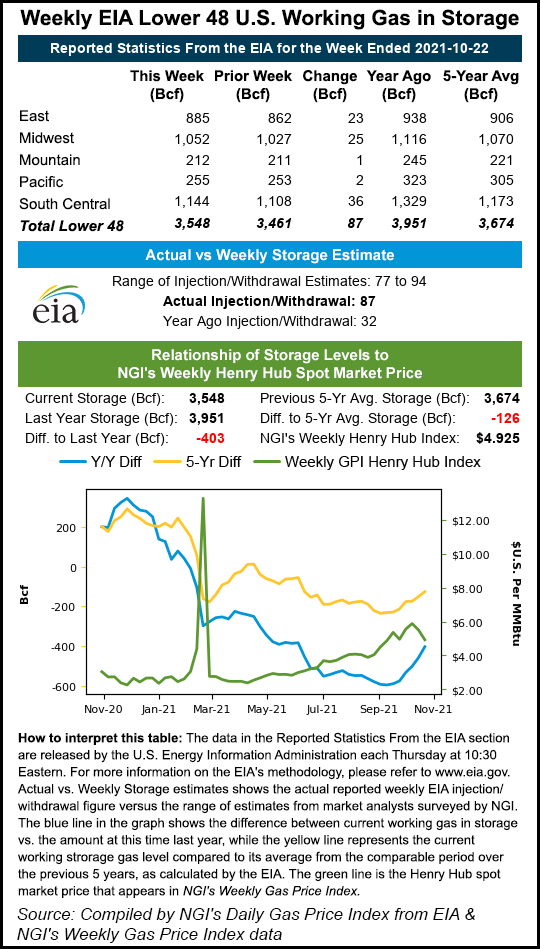 Russia To The Rescue

With weather taking on an increasingly important role in the gas market as the winter season nears, futures action in recent days has been a strong reflection of swings in the latest weather models. After the prompt month skyrocketed to $6.150 midweek because of colder-trending weather models, price action appeared to deviate a bit on Thursday.

That’s likely because European gas prices plunged amid reports that Russia would begin increasing supplies to the continent in November. Reuters reported that Russia President Vladimir Putin on Wednesday told the head of Kremlin-controlled energy giant Gazprom PJSC to start pumping natural gas into European gas storage once Russia finishes filling its stocks, which may happen by Nov. 8.

The increased flows to Europe would help to improve the dire supply situation ahead of colder winter temperatures. Industrial customers already have responded to the potential shortfall by slowing operations or shutting down altogether in the wake of higher prices. Energy Aspects also noted that a heavy amount of gas-to-coal switching has taken place, not to mention “glimmerings of a gas-to-liquids switching.”

This feeds into the firm’s view that Europe would be able to preserve enough stocks to avoid deliverability issues for covering priority customers in late winter. Energy Aspects expects European stocks to be 80.8 billion cubic meters (bcm) by the end of October. Aggregate European stocks would cover the November 2017-March 2018 stockdraw of 73.3 bcm — the largest in recent years — when Europe experienced extreme cold over February-March 2018.

“But if aggregate European stocks were depleted to just 7.5 bcm (7% of the total), then limits on withdrawal capacity would mean deliverability problems from underground storage if daily nominations spiked during a late winter cold snap,” Energy Aspects analysts said.

The U.S. supply picture is far less alarming thanks to a several-week span of mild temperatures that resulted in a string of larger-than-normal injections.

The EIA’s 87 Bcf figure trimmed the deficit to year-ago levels to 55 Bcf and to the five-year average by 25 Bcf.

Bespoke Weather Services said the 87 Bcf injection once again reflected loose supply/demand balances versus the five-year average. This is a common theme outside of a week earlier in a month that featured very low wind, according to the forecaster.

Analysts appeared to have a good handle on the EIA figure. Ahead of the report, a Bloomberg survey showed injection estimates ranging from 77 Bcf to 94 Bcf, with a median injection of 88 Bcf. The same range was seen in a larger Reuters poll of 17 analysts, in which a median injection of 86 Bcf was produced. The same range of projections in a Wall Street Journal survey averaged at a 85 Bcf injection. NGI modeled a 94 Bcf increase in stocks.

Broken down by region, the South Central led with a 36 Bcf increase in storage inventories, including a 21 Bcf build in salt facilities and a 15 Bcf addition to nonsalts, according to EIA. Midwest stocks rose by 25 Bcf, and East stocks increased by 23 Bcf. Pacific and Mountain inventories were up by the single digits.

Looking ahead to next week’s EIA report, Bespoke said early indications pointed to a 65 Bcf injection, which also would be loose to the five-year average.

Injections would likely continue into November as well, though some small draws also are on the table. Bespoke said the weather models continued to move colder through the early part of November as an upper level ridge spikes into Northwest Canada. This ridge spike looked to be temporary, though, with the pattern still evolving back into a state that begins to look more hostile for cold moving into the middle third of November.

“Our level of confidence remains on the low side, given the continued colder momentum,” Bespoke said. “But we still still see a pattern that is hinting at some re-warming down the road.”

The firm noted that production also ticked higher to around 92 Bcf. In addition, wind generation was high, particularly across Texas following the storms that rolled through midweek. This reinforced projections for another loose storage stat in the next EIA report.

“All of this simply means we will need more cold in order to sustain these price levels or move higher,” Bespoke said.

Almost as quickly as they rallied, spot gas prices plunged back to earth Thursday with a Nor’easter now far offshore and generally pleasant conditions in other regions of the Lower 48.

Cash prices also fell hard out West as the region is set to finally emerge from a series of powerful storms that began last weekend.

The National Weather Service said a “potent, yet brief” atmospheric river event was likely to occur over the Pacific Northwest late Thursday as a low pressure system made its way across the region. The heaviest rainfall would occur over the Olympics and Cascades through Friday, but much of the Pacific moisture was expected to run out by the evening. This would pave the way for high temperatures in the Northern Plains to rise to 15-20 degrees above average.