Though still early for a full assessment of former Hurricane Ida, natural gas futures traders on Monday focused squarely on the destruction of natural gas demand brought about by the catastrophic Category 4 storm. The October Nymex gas futures contract, on its first day in the prompt position, settled at $4.305, off 8.3 cents from Friday’s record levels. 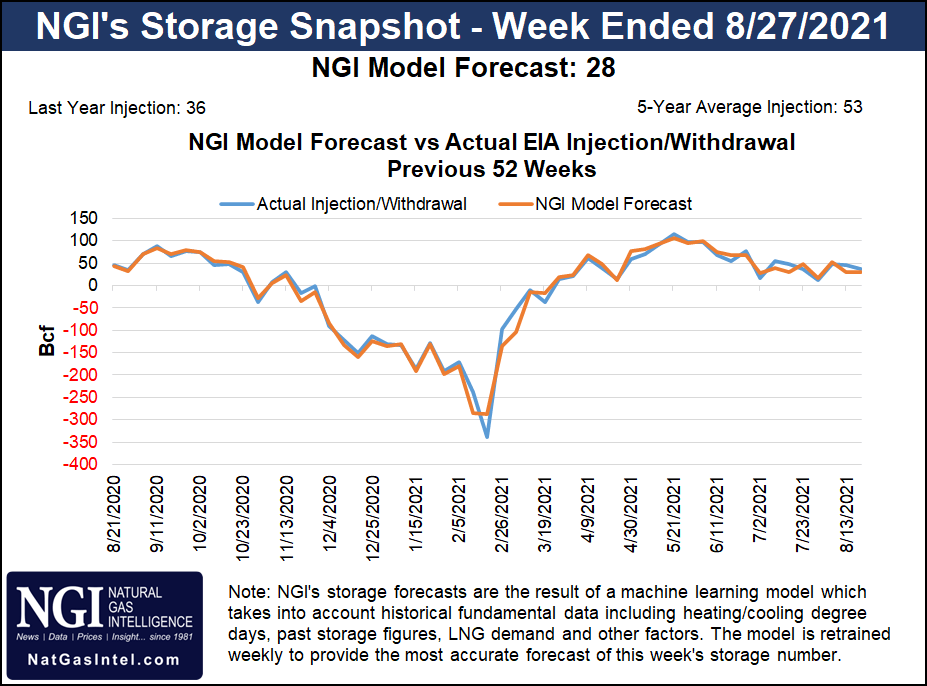 Spot gas prices also weakened as Ida, which had been downgraded to a tropical depression by late Monday, dumped rain and ushered in cooler weather for much of the eastern United States. NGI’s Spot Gas National Avg. slipped a half-cent to $4.280.

With no shortage of images of Ida’s wrath circulating over the internet and on television, futures traders had plenty to digest after she crashed ashore Louisiana midday Sunday.

On the supply front, the Bureau of Safety and Environmental Enforcement (BSEE) said 2.090 Bcf/d, or 93.75%, of the natural gas produced pre-Ida in the Gulf of Mexico (GOM), was shut-in. Around 1.74 million b/d (95.65%) of the oil produced offshore also had been shut-in, the Department of Interior agency reported.

The GOM supplies around 5% of the nation’s gas supply and 17% of the oil.

Meanwhile, Wood Mackenzie noted that several pipelines issued notices regarding shut-ins/evacuations. These include the Destin, Garden Banks, High Point, Kinetica, Mississippi Canyon, Nautilus, Sea Robin and Stingray pipeline systems. However, none had provided an update on when operations may resume.

As for demand, the picture was even murkier. Ida knocked out power to all eight of Entergy Corp.’s transmission lines, which deliver power into the New Orleans area, leaving more than one million people without electricity. The utility also reported outages in Mississippi and Arkansas.

Liquefied natural gas (LNG) facilities may have been spared the brunt of Ida’s impact, but feed gas volumes took a hit nevertheless. Early NGI data showed gas flowing to U.S. terminals tumbling to around 10.2 Bcf on Monday, down from around 10.85 Bcf on Sunday.

Cameron LNG spokesperson Anya McInnis told NGI that Ida did not affect operations at the facility. Similarly, Cheniere Energy Inc. spokesperson Jenna Palfrey said Sabine Pass did not sustain damage during the storm. Full operations, including shipping, had returned to normal by Monday.

However, shut-ins were widespread at local refineries and petrochemical complexes.

Several energy companies, including Royal Dutch Shell plc’s U.S. unit and Phillips 66, said they were working Monday to assess impacts on infrastructure in and along the GOM.

Fully assessing Ida’s impact is likely to take at least another day or so, according to EBW Analytics Group. For now, though, the potential loss of natural gas demand appears to be in the same range as production losses in the Gulf of Mexico.

“If this picture holds, support for last week’s price spike is likely to quickly fade, with gas rapidly giving back most of last week’s 50-plus-cent gains,” EBW analysts said.

Unfortunately for gas bulls, Ida appears to have squashed any hopes for another late-season heat wave. Bespoke Weather Services said the 15-day forecast has trended cooler since Friday. The change was two-fold, it said, as the incoming eastern U.S. trough trended stronger and faster. This is something the American ensemble data hinted at in recent runs, but was not given much consideration.

At the same time, the remnants of Ida have been resolved better in the modeling, according to Bespoke. Clouds and rain were expected to limit daytime heating in her path across the Midwest and over into the Mid-Atlantic and Northeast.

“This sets the stage for one of the more tame September patterns we have seen in quite some time, as this month has typically been a hotter month in recent years,” Bespoke chief meteorologist Brian Lovern said. “We also will need to continue watching the tropics, as more storms are likely, though no imminent threats are seen at this point in time.”

The cooler weather could help improve the storage situation ahead of winter. Though this week’s injection is likely to fall short of historical levels, the stronger winds and power outages resulting from Ida could mean more gas could flow into storage.

For this week, analysts are looking at another high 20s Bcf storage build. NGI modeled a 28 Bcf injection, which would compare with last year’s 36 Bcf build and the 53 Bcf five-year average.

This suggests prices are either “too expensive, or the game has changed.” Many market participants believe the latter, aided by tight supplies in Europe and Asia, the firm said.

Spot gas prices moved lower across much of the country in the wake of Ida.

The loss of power caused by the devastating storm sent spot gas prices across Louisiana tumbling for Tuesday’s gas day. Henry Hub dropped 13.5 cents from Friday’s levels to reach $4.205. Texas Gas Zone 1 was down 11.5 cents to $4.090.

In addition to the power losses across Louisiana, Mississippi and Arkansas, cooler weather was set to soften gas demand across the eastern United States in the coming days.

AccuWeather said rain would saturate portions of the central Appalachians to the mid-Atlantic and New England, with the potential for life-threatening and damaging flooding. The system was expected to continue tracking to the northeast across the central and eastern United States, losing wind intensity along the way. Ida was likely to be a tropical rainstorm by the time it reaches the Northeast during the middle of the week.

On Monday, flash flood watches already had been posted along a 1,200-mile-long swath from southern Louisiana to eastern Pennsylvania and northern New Jersey, and they are likely to become even more extensive in the Northeast.

Even after Ida moves off the New England coast later Thursday, residents across the Northeast may still feel the storm’s wrath in the days that follow, according to AccuWeather. There likely would be some interaction between Ida and an approaching dip in the jet stream in the northeastern United States. This could cause the air pressure at the center of Ida to drop, unleashing tremendous rainfall.

“Many areas along the path of Ida from the central Appalachians as well as parts of the mid-Atlantic and southern New England are likely to have rounds of rain over a 12- to 18-hour period, but intense rainfall can last six to eight hours,” AccuWeather senior meteorologist Dan Pydynowski said.

Prices across the Southeast were already starting to crumble. Transco Zone 4 spot gas plunged 18.0 cents to $4.250 for Tuesday’s gas day.