Natural gas futures floundered back into freefall Wednesday – the case of a majority of trading sessions early in the new year – as production climbed, benign weather persisted and the market braced for an anemic storage withdrawal. 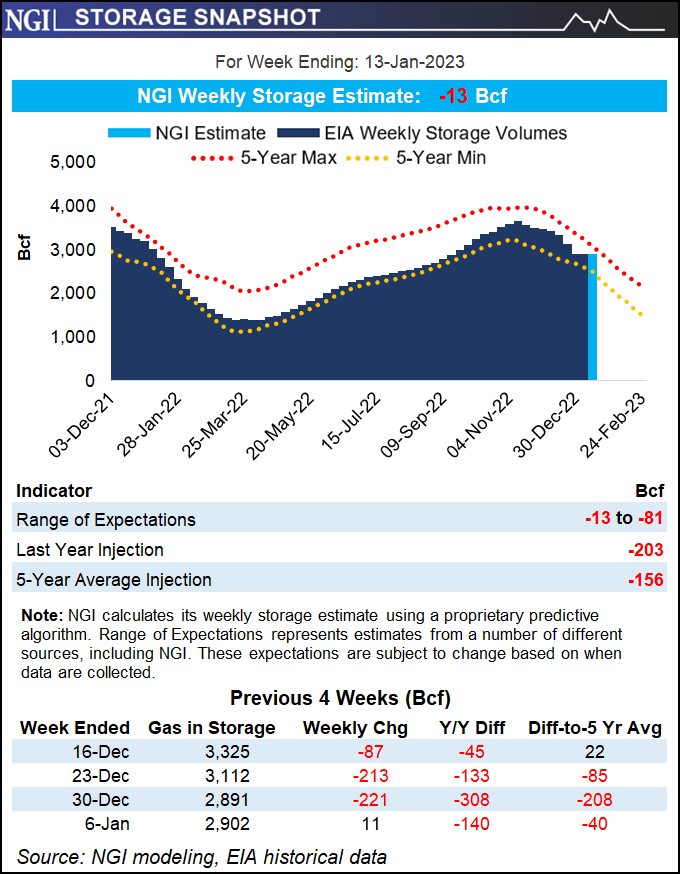 However, because of seasonally mild weather across large swaths of the country – from the South to the East – to start 2023, demand has tapered and prices have dropped more than 50% from late last year. Forecasts show a return of more widespread winter weather in the final week of January, but the weather outlook has fluctuated on a daily basis and left traders doubting the intensity and duration of the coming cold.

Both the American and European weather models advertised warmer trends overnight for the final week of January, according to NatGasWeather.

“Overnight data maintains very light national demand the next three days, light this weekend into the start of next week, but still strong demand Jan. 26-31,” NatGasWeather said Wednesday. However, the outlook in the latest model runs was “simply not as impressive with the amount of cold into the U.S. and also not as aggressive in advancing subfreezing air into the southern and eastern U.S.”

Forecasts needed to maintain or strengthen cold in the outlook for late January to avoid “frustration/selling” in the market, the firm added.

“Mother Nature is pretty mild right now and without a change, it’s looking like a relatively warm winter,” Saal told NGI. “Now, there’s a lot left of the season, but for the most part, the market is waiting to see. And in the meantime, there’s plenty of supply, and that’s weighing on prices.”

Given a particular weak weather start to the year – the first half in January could prove the warmest in nearly 20 years, according to DTN – Saal said the market is braced for another bearish storage print this week. It would follow the rare January injection of 11 Bcf that the U.S. Energy Information Administration (EIA) reported for the week ended Jan. 6.

The EIA report covering the week ended Jan. 13 “is going to be way below any historic average,” Saal said. “It’s just a matter of how far below and how it compares” to analysts’ expectations.

Estimates submitted to Reuters ranged from declines of 53 Bcf to 81 Bcf, with a median of 73 Bcf.

A Wall Street Journal survey landed at an average draw of 72 Bcf, with responses ranging from decreases of 61 Bcf to 81 Bcf.

The estimates compare with a five-year average draw of 156 Bcf and a year-earlier pull of 203 Bcf.

The injection for the Jan. 6 period compared with a five-year average pull of more than 150 Bcf. It lifted inventories to 2,902 Bcf, leaving stocks slightly below the five-year average of 2,942 Bcf and the year-earlier level of 3,042 Bcf.

Aside from a potential shift in the weather, the other possible catalyst for natural gas futures is the anticipated return of Freeport LNG in Texas. The liquefied natural gas exporter said it expects to relaunch later this month, following a June fire and several restart delays last year tied to regulatory hurdles.

The company hopes to ramp up to 2 Bcf/d of capacity yet this winter, though full restoration to 2.38 Bcf/d may not happen until the spring. That gas, destined for export, would come from existing domestic supplies and could help align supply/demand balances, said Marex North America LLC’s Steve Blair, senior account executive.

Still, he told NGI the market remains dubious about the timing of Freeport’s return, despite the company’s recent assurances, leaving bulls “disappointed” at this stage in the young year.

However, “before winter is over, hopefully, Freeport will take 2 Bcf/d off of the domestic market,” Blair said.

Spot gas prices rallied to start the week amid rounds of winter weather in the West. But with temperatures generally comfortable elsewhere, modest demand and broader bearish sentiment sapped the momentum on Wednesday

Prices in the Rockies and California, while easing Wednesday, remained lofty relative to the rest of the country. Snow and freezing air impacted parts of the Rocky Mountain region, while chilly air lingered in California following a rash of heavy rains this month.

Demand has eased in California this week, as Wood Mackenzie analyst Quinn Schulz noted, but prices in the state remain high partly because of supply constraints that left gas flows lighter than consumption at some hubs.

This included PG&E Citygate, where average prices fell $2.090 Wednesday but remained elevated at $20.075.

Looking ahead, National Weather Service (NWS) data for the rest of this week and early next pointed to above-average temperatures across the South and East.

Chillier air that descended from Canada into parts of the West and northern Plains Wednesday was expected to spread across much of the Midwest and Great Lakes by next week. NWS forecasts indicated these conditions could advance to the South and East late in the month, driving more heating demand.