Natural gas futures rebounded Thursday amid bullish shifts in weather conditions and a lighter-than-expected storage injection — and despite widespread power losses in Florida as Tropical Storm Nicole wreaked havoc on the state’s Atlantic coast as well as inland markets. 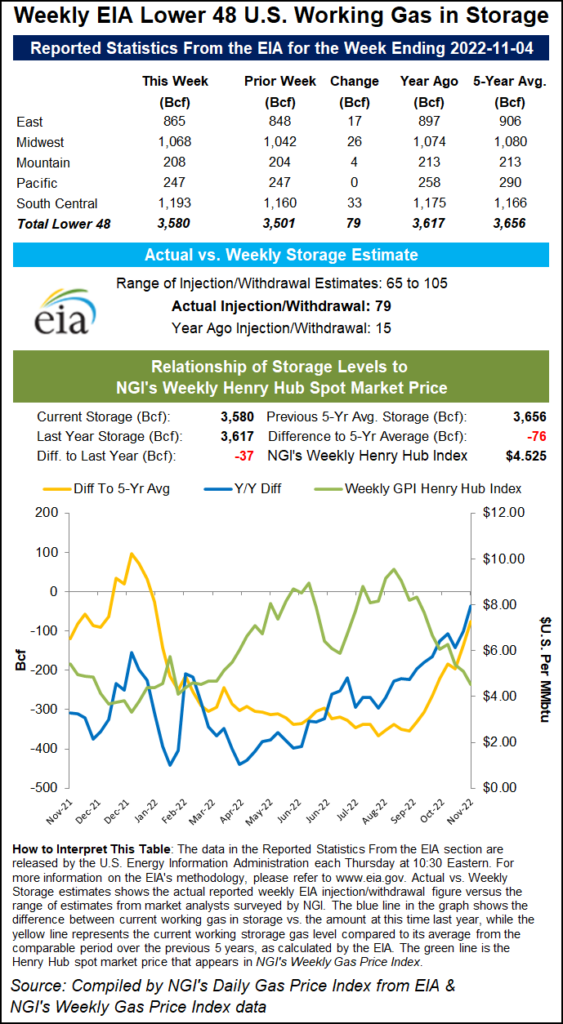 After plunging more than $1.00 over the two previous sessions – when weather was benign — the December Nymex natural gas futures contract on Thursday advanced 37.4 cents day/day and settled at $6.239/MMBtu. January gained 38.8 cents to $6.613.

The Energy Information Administration (EIA) on Thursday reported a 79 Bcf injection into U.S. natural gas storage for the week ended Nov. 4. It marked a stout increase by historical standards and shrunk a lingering deficit to the five-year average.

However, the print came in below the 83 Bcf median produced by both Reuters and Bloomberg surveys, and prices advanced following the report.

Early estimates for the week ending Nov. 11 submitted to Reuters ranged from injections of 51 Bcf to 78 Bcf, with an average increase of 64 Bcf. That compares with an increase of 23 Bcf in the comparable week of 2021 and a five-year average decrease of 5 Bcf.

Meanwhile, in bears’ favor, a return of Freeport LNG operations slated for this month remained in doubt Thursday. The Freeport liquefied natural gas facility, offline since a June fire, had been slated to return to service this month. But it has yet to secure all regulatory approvals, and Blair noted the market is dubious about the timing of its relaunch.

“I think it’ll keep the market from taking off to the upside in a big way,” Blair said of the Freeport uncertainty.

Tropical Storm Nicole crashed into Florida’s eastern coast early Thursday. It made landfall as a hurricane with maximum sustained winds of 75 mph before weakening some and returning to tropical storm status as it moved inland over central Florida, according to the National Hurricane Center (NHC). It was expected to move across the Florida Panhandle and Georgia Thursday night and on Friday before moving up the mid-Atlantic and Northeast by the weekend.

Wood Mackenzie analyst Kara Ozgen said natural gas demand Thursday dipped to a 30-day low. More than 345,000 utility customers were without power in Florida around midday Thursday, according to poweroutage.us.

Elsewhere, the first widespread bursts of winter-like cold pushed from the Mountain West into the northern Plains Thursday. These conditions were forecast to spread across much of the eastern half of the country over the weekend, delivering freezing low temperatures and driving seasonally strong consumption of natural gas to power furnaces.

Rubin also said the threat of an impending railroad strike by Nov. 19 — a bullish risk for natural gas prices because it could interrupt deliveries — was postponed until early December. The Brotherhood of Maintenance of Way Employees Division, one of the unions opposed to current contract terms, extended its cooling-off period to align with the Brotherhood of Signalmen Union. The earliest a strike may now occur is Dec. 9, Rubin said.

The natural gas cash market on Thursday looked past Nicole’s temporary impacts on demand and focused instead on coming cold. Prices popped in every region, including the Southeast.

In addition to colder temperatures, a powerful snowstorm strengthened over the Mountain West and headed for the central United States on Thursday, with blizzard conditions forecast for swaths of the northern Plains, according to AccuWeather meteorologists.

“This will be the first major snowstorm of the season for the northern Plains and the combination of heavy snow, powerful winds and low visibility will result in hazardous travel,” AccuWeather Senior Meteorologist Brian Wimer said.

Markets across the Dakotas were forecast to experience whipping winds and blinding snow Thursday night into Friday, he said, with freezing rain possible in parts of Minnesota. Severe thunderstorms were forecast for large portions of the Midwest, including Nebraska, Iowa and Missouri.

Cooler weather also was in the cards for the southern Plains and Texas. Temperature shifts were expected as far south as Houston, according to Space City Weather meteorologist Eric Berger.

“We will continue a slight downward trend in temperatures until the arrival of a strong cold front on Friday that ushers in much colder air for the weekend, and beyond,” for the Houston area, Berger said Thursday. “It still looks as though inland parts of the area will drop down into the upper 30s by Sunday morning, so this should be our first real taste of what passes for winter-like weather in Houston since March.” In Texas, Houston Ship Channel gained $1.245 to $3.595 and Katy advanced $1.130 to $3.640.